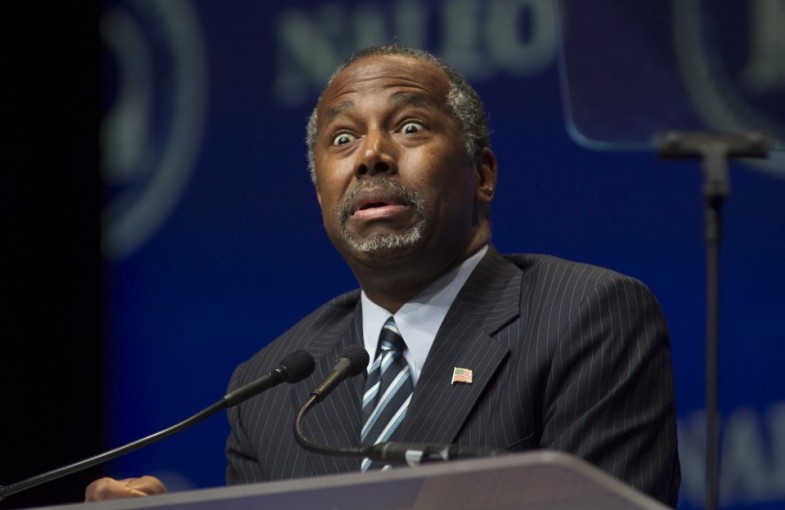 The Associated Press reports that the Republican presidential candidate Ben Carson received the informal endorsement of NASCAR racing legend Richard Petty. Petty’s support is a boost for Carson in the South, particularly in the early March primary states.

One tradition of many NASCAR fans is driving to races while flying the Confederate flag. In a remarkable act of selling out and pandering for support, Carson endorsed “private citizens” flying the flag.

Carson pathetically told the AP that NASCAR fans should continue flying the flag “if it’s private property and that’s what they want to do.” According to Carson:

”If it’s a majority of people in that area who want it to fly, I certainly wouldn’t take it down.”

Carson rationalized his self-loathing and support of this racist symbol by saying:

“Swastikas are a symbol of hate for some people, too. And yet they still exist in museums and places like that.”

He then enabled white supremacists by claiming that battles over the Confederate flag are “a local issue.”

Carson has some serious personal issues or he’s an exceptionally kowtowing politician who will say anything to win the GOP nomination. Even if it means degrading himself.

The way he justified his support for the confederate flag was downright disturbing. He actually compared flags in museums – which are there for the sake of preserving history – with confederate hate flags actively being waved in contemporary society.

Ben Carson’s convoluted mindset continues to amaze and confound. It is very possible that he could go down in history as the smartest dumb person who ever lived. That anyone would consider voting for this crackpot is astounding, even more so when one considers that the office he seeks is President of the United States.

Carson’s opportunistic, and possibly naïve, views on race do not mean he will receive the votes of the Southern whites he so desperately courts. Julie Lopp, whose family owns Lexington Barbecue, where Carson and his staff stopped for lunch, told The Associated Press:

“As much as people try to sound like they don’t care, some people think a black president will look out for the black lifestyle.”

Can someone please tell me what the black lifestyle is?

Not only is the lethargic surgeon inexperienced and lacking in basic knowledge of foreign affairs, his religious zealotry is unnerving, and reveals a man who doesn’t have a firm grasp of Separation of Church and State.

This well-educated man actually believes that Darwin’s theory of evolution is “something that was encouraged by the adversary…it has become what is scientifically politically correct.” It is 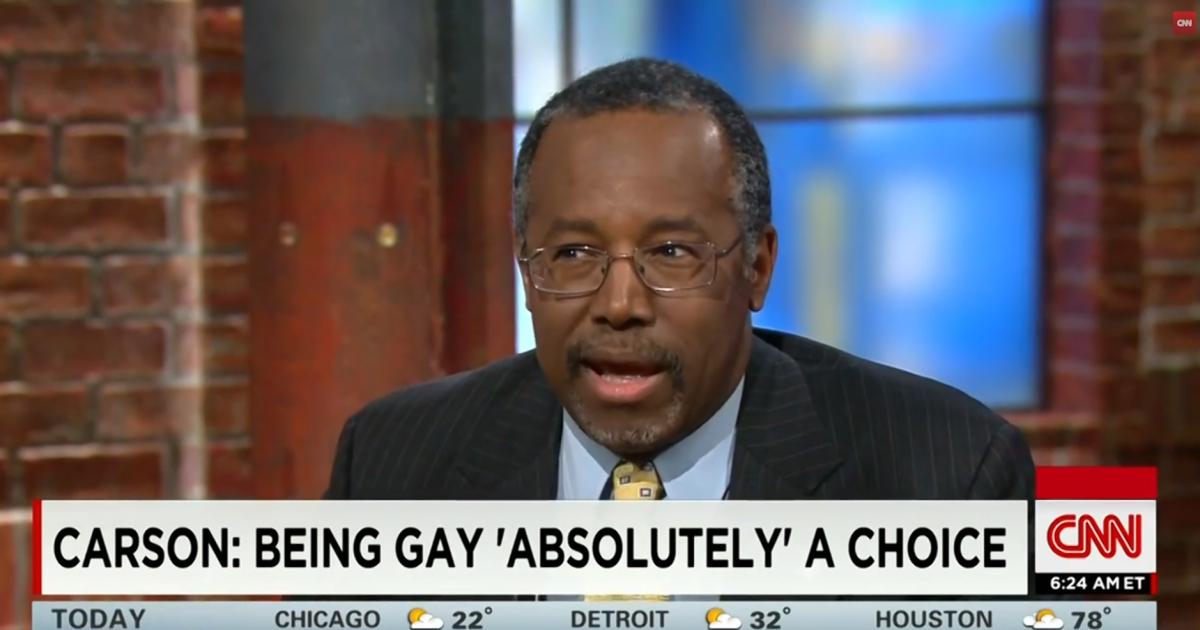 mind-blowing that a doctor who practices medicine would claim that the Devil is responsible for the idea of evolution. He flat out lies when he claims that evolution is controversial among scientists. He disgraces his profession when he casually substitutes accepted scientific facts with fanciful musings of faith. While Carson projects a low-key image, he is a dangerous ideologue with wacky ideas that deserve scorn and mockery – just like his foolish supporters who would inflict him on our nation.

In one of his more bizarre statements, Carson said that homosexuality must be a choice because some men go to jail heterosexual and leave incarceration gay.

If Carson is willing to give a pass to whites who fly the Confederate flag just to get their vote, it should come as no surprise he’s willing to scapegoat Muslims. When asked if a Muslim should be president, Carson said “no”, endorsing a religious test for the presidency.

This ugly comment highlighted the grotesque nature of the Republican nomination fight, as well as the flaming intolerance of Carson, who seems to disrespect anyone who is not a Christian extremist.

Carson seems to believe that the vast majority of Muslims are jihadists, who must be secretly plotting against America if they are true believers. His religious arrogance is stunning, which leads to a willful blindness to the obvious: He and many leading GOP presidential wannabes seem to embrace a form of Christian Sharia, that places Biblical Law above the constitution. In their warped view, it is treason for a Muslim to impose religious views on America, but somehow patriotic if done by tyrannical Christian fundamentalists.

A panelist on CNN, Rula Jebreal, said it would not be shocking if a deranged gunman “will go to a mosque tomorrow… and will start shooting people and then these people will have blood on their hands, all of them, Carson, Trump, and Ted Cruz.”

They absolutely would be at fault – for the divisiveness and hatred they have gleefully injected into their vile campaigns. But, hey, if the worst occurred, maybe the good doctor could volunteer to perform surgery on these victims of his appalling misinformation and malicious smears.