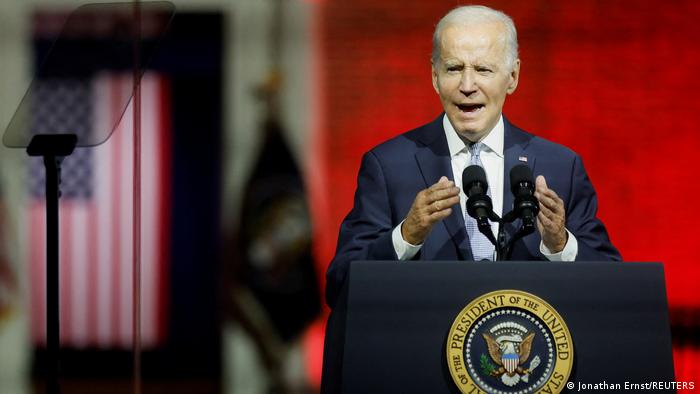 Biden told the truth: Republicans are a threat to democracy

Joe Biden has found his voice and it couldn’t come at a more fortuitous moment. The president was elected on a platform to heal divisions and bring the nation together. While an admirable impulse, it was mission impossible. Instead of a loyal GOP opposition, what Biden encountered were disloyal obstructionists whose sole obsession was to use the tools of democracy to end our form of government. Talking softly didn’t work, so what America needed was “Big Stick Biden”, and he didn’t disappoint.

Biden’s historic speech at Independence Hall in Philadelphia was refreshingly honest and a brutally accurate assessment of today’s full-blown fascist Republican Party. It was a veritable Red Bull for his base, in the feverish bullrush toward crucial primary elections in November that could determine the fate of our nation.

“Donald Trump and the MAGA Republicans represent an extremism that threatens the very foundations of our Republic,” Biden told a country fed up with right wing lies, conspiracies and dark promises of violence if they don’t get their way.

In fact, Sen. Lindsey O. Graham (R-SC), only days prior to Biden’s speech, threatened “riots in the streets” if Donald Trump is compelled to follow the law, like every other U.S. citizen. Trump went further on FOX News warning Americans, “People are so angry at what is taking place…Whatever we can do to help because the temperature has to be brought down in the country. If it isn’t, terrible things are going to happen.”

We fought the Revolutionary War because we didn’t want to live by the diktats of an all-powerful king. We must never be cowed by threats of unrest or violence. If that’s what the GOP has planned, their next insurrection must be rapidly quelled and those involved fully prosecuted.

The Brown Shirt wing of the GOP showed its true colors by interrupting Biden’s speech. At first, I found the shrieking “Bullhorn Bullies” rather aggravating. But the more I thought about it, the irrational, belligerent bellowing and piercing police sirens – literally barbarians pounding on the gates of civilization — was a necessary soundtrack to Biden’s speech. We could literally hear our dystopian future if Biden’s call for democracy and freedom fails. Extremism, violence, terrorism, oppression, chaos, death and destruction is all this malevolent movement offers.

Biden sagely defended the protesters, reminding Americans that our constitution gives demonstrators the right to voice their opinions. In the regime today’s MAGA Republicans are agitating for, the right to dissent would likely cease to exist. It’s particularly offensive when grunting MAGA goons exploit democracy by protesting, while trying to undermine it. Entertainer John Legend pithily Tweeted, “When the president comes out as anti-fascist and pro-democracy and you feel attacked…Perhaps you need to do some introspection.”

Predictably, Republicans are howling that Biden’s address is criminalizing political opposition. They absurdly point to the FBI’s search of Trump’s “Corruption Castle” as evidence. Never mind that the former president stole, and then hid, Top Secret documents that jeopardize our national security. What was he doing with this material and whom did he intend to share it with?

Republicans also point to insurrectionists – traitors they sickeningly portray as political captives — who were sent to prison this week for attacking the police and storming the Capitol on January 6. Trump even vowed to give pardons and apologize to those imprisoned for ransacking our temple of democracy.

Note to Republicans: If you don’t want your dangerous movement criminalized, stop acting like seditious criminals. It’s not a coincidence that your Dear Leader, who never met a dictator he didn’t worship, is now under investigation for espionage.

Republicans have tried mightily to portray the elderly Biden as comatose when he has turned out to be consequential. The President has erased crippling student debt, passed historic legislation to fight climate change, passed an infrastructure bill, allowed Medicare to negotiate the price of prescription drugs, cracked down on tax cheats, invigorated domestic semiconductor chip manufacturing and improved healthcare for veterans. He has also used his vast experience on the international stage to create a powerful coalition to fight Russian aggression against Ukraine.

Meanwhile, Republicans are undermining their chances of returning to power in Washington by revealing the terrifying extent of their extremism. Wacky Republican candidates, (Dr. Oz, Herschel Walker, Blake Masters, JD Vance etc.) have raced to update their websites to soften their alarming positions on abortion. This is a reaction to women registering to vote in record numbers and concern in the suburbs that the GOP has gone too far.

In an ominous sign for Republicans, Sarah Palin (R-Quitter) lost her race for congress to Democrat Mary Peltola. In New York, Democrat Pat Ryan won a special election race largely focused on abortion. If abortion and ending democracy weren’t enough to scare voters, Republicans were against protecting veterans from toxic burn pits before comedian Jon Stewart shamed them into reversing course. The GOP fought against capping prices for insulin and are gearing up to stop student loan forgiveness.

“Let’s be clear about what they would be trying to do here: The same folks who voted for a $2 trillion tax giveaway for the rich and had hundreds of thousands of dollars of their own small business loan debt forgiven would be trying to keep millions of working middle-class Americans in mountains of debt,” Hasan told CNBC.

Yes!! That’s precisely the fighting spirit we need to save this country. Republicans offer nothing other than fear, violence and obstruction. Their entire plan for America was to carp about energy prices and scream “recession”. But that pathetic “plan” is running out of gas – with prices dropping more than 70 days in a row, the most since 2005. Robust job growth is also sabotaging Republican plans to misrepresent the state of the economy.

Let’s also not forget the amazing work of the January 6 committee for exposing the MAGA plot to stage a coup against America. The GOP’s faltering prospects has led to a catty public tiff between Sen. McConnell and Rick Scott, the chairman of the National Republican Senatorial Committee. (Attention voters: Don’t forget that Scott wants to “sunset” Social Security and Medicare)

Joe Biden walked the walk and brought his big stick into the saloon. Now, we must do our part to support Biden by voting to throw out the dangerous MAGA bums who threaten violence and aim to destroy our democracy.