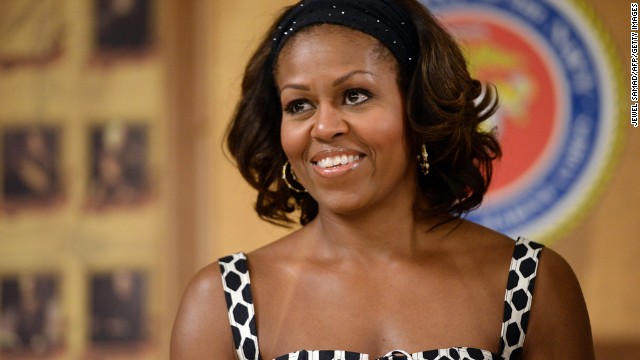 It’s official – America IS number one. But not in the way we had hoped.

According to a new study, America is, by far, the portliest, pudgiest, piggiest nation on earth. We have 87 million of the world’s 671 million obese people. That represents 13% of the world’s total, even 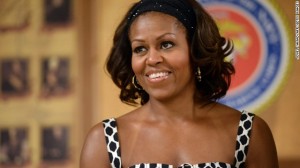 though Americans are only 5% of the world’s population.

We used to be land of free and home of the brave. Now, we’re land of fries the home of the buffet. Thankfully, First Lady Michele Obama stepped into this gluttonous pit of moral molasses – and tried to slim down the kiddies – before they turned into their chunky parents. Chocolate chips off the old block, so to speak.

To help curtail this epidemic, First Lady Michele Obama introduced “Let’s Move” – which are healthy eating standards for the 32 million children who participate in school lunch programs each day. The goal was simple: Have fruit replace funnel cake and salad in lieu of Skittles.

One would think trying to protect the schoolchildren from health disorders would be non-controversial. But, of course, we are dealing with today’s dysfunctional Washington, where Republicans have an odd, if not irrational, hatred of ALL-things-Obama.

If the First Lady had spoken in favor of oxygen, the GOP would have campaigned for carbon dioxide. If she had endorsed Heaven, they’d give three cheers for Hell. When something as innocuous as healthy school lunch programs becomes controversial, it represents hyper partisanship at its most nauseating. It is why Washington repulses most Americans and only 22-percent of voters say Congress deserves to be reelected.

Beyond visceral opposition to anything Obama, the GOP is showing the moral degradation of their unfettered free market policies. In their small minds, schoolchildren are just another market to be exploited to turn profits.

Led by the GOP, the House Appropriations Committee passed a budget bill this week that allowed schools to apply for waivers from the federally mandated health standards.

Welcome to the moral sewer of GOP-style privatization, where the Republicans and their corporate masters are trying to balance flabby budgets on the rotund backs of our flabby children. And, if you have been shopping at big box stores in the conservative suburbs, you quickly learn that it is the Republican youth whose health is most imperiled by poor eating habits. These kids waddle alongside their portly parents who teach them that Froot Loops have some relation to actual fruit and corn dogs are vegetables.

Does our family values Congress give a damn about schoolchildren? In 2011, they adopted special rules trumpeted by the food industry to permit pizza, because of its tomato sauce, to be counted as a vegetable, and loosened planned restrictions on the number of times a week that french fries could be offered to students. If Congress is going to shill for the makers of carnival food, why don’t they include sticks of fried butter and funnel cake to create well-rounded diets?

We have a huge childhood obesity problem in this country. A new report published in JAMA Pediatrics found that 17.3 percent of children ages 2 to 19 were obese in 2011 to 2012. More than 100 national, state and local nutrition and child advocacy organizations — including the American Pediatric Society, Children’s Defense Fund and Healthy Schools Campaign — circulated a letter asking lawmakers to fight the waiver request.

Still, these alarming statistics haven’t stopped Republicans and their friends in the food industry from trying to subvert healthy standards. For example, The School Nutrition Association has received donations from, and is in bed with, the processed-food makers of frozen pizza and agribusiness.

Some argue that cafeterias won’t turn a profit by serving healthy food because students will get their junk food fix by eating lunch at fast food joints across the street. My response is, so what? If the primary motive of schools is turning a profit by peddling harmful products, why don’t they cut to the chase and start selling cigarettes, marijuana, and beer in vending machines? They’d make a lot of money that way.

School officials and lawmakers need to get their priorities straight. What truly matters is teaching young people what classifies as healthy food and how to eat properly. Youth who participate in healthy eating will feel better and find that they are more successful in their studies. Those who opt to eat junk food at alternative venues will at least have been educated on healthier diets. When the time comes later on in life for a diet and lifestyle change, the knowledge they gained in school will help them successfully make the transition.

Dr. Asheley Cockrell Skinner, a professor of pediatrics at the University of North Carolina School of Medicine, told CBS News.

“I think the possibility that kids are becoming more severely obese when they are younger, they are going to become sicker as younger adults. We know with diabetes the younger you start the harder is to manage it. It makes me worry about what’s happening in their bodes that’s going to follow them into a adulthood.”

If Obama-haters sabotage these eating standards they are not saving us money. They are simply is kicking the can down the road so taxpayers have to foot the bill later for higher healthcare costs. This strategy is penny wise and many pounds foolish. Public education should be about learning, not seducing youth into obesity and early death for short-term corporate profits.

I also think it’s fascinating that conservative politicians used to rail on the gay community about our dangerous so-called lifestyles. But, clearly the most dangerous lifestyle is the all-you-can-eat buffet. Yet, these hypocrites celebrate this reckless overindulgence and sinful gluttony.

When these phonies talk about lifestyles, they simply mean that they don’t like other people having sex without feeling guilt and shame. In terms of lifestyles, these conservatives protected the cigarette lobby for decades. They now worship the deadly NRA. They make sure Big Coal is polluting our air. They are opposed to mass transit, so more people have to drive in cars – which leads to accidents. They are often pro- tanning bed, which causes cancer. And they keep schoolchildren from learning how to eat right.

The evidence is clear – conservatism is a dangerous lifestyle that harms all of us.