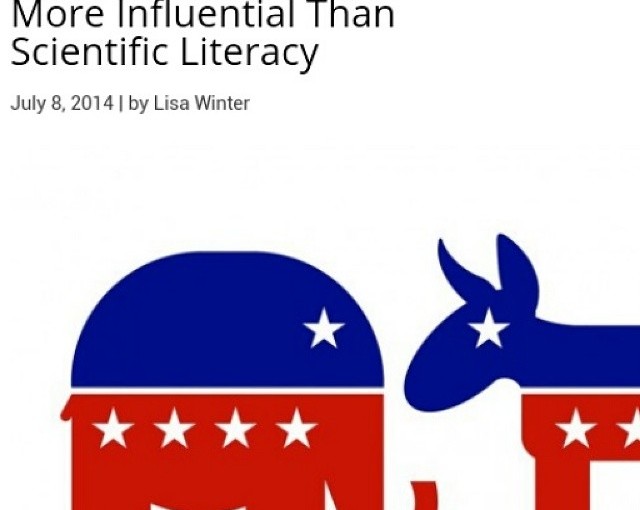 On June 21, former Republican Treasury Secretary, Henry Paulson, wrote a provocative op-ed in the New York Times. He practically begged Republicans to support efforts to mitigate climate change. Here is what he wrote:

“There is a time for weighing evidence and a time for acting….We’re staring down a climate bubble that poses enormous risks to both our environment and economy. The warning signs are clear and growing more urgent as the risks go unchecked.”

Paulson isn’t alone. There are a handful of Republican consultants in Washington, DC who are trying to drag their party into the 21st Century. They were featured in a Sunday cover story for the New York Times magazine. They have their own organization, the YG Network. They have their own serious-minded publication too, National Affairs, which at least makes the attempt to use empirical evidence to solve problems – albeit in screwy, convoluted Republican sort of way. Still it’s progress in this day and age of Republican no-nothings.

These Republican operatives have urged the GOP to reject the extremist wing of the party, not be so negative and oppositional, and focus on helping the Middle Class, instead of being Wall Street’s butler.

Personally, I don’t support their policies, but do support their project. Progressives desperately need an opposition party that is not literally insane. We can’t afford to have one of our two parties be a Christian Ayatollah Party that rejects reality. This is because we can’t win all the time. And, when we lose, the country cannot fall off a cliff, as we did with George W. Bush. We need a normal, semi-rational, sort of fact-based Republican Party, for this nation to succeed in the modern world.

With the inmates now running the GOP asylum, the stakes are too high. It’s a dangerous game of feast or famine. It has left us in a situation where all of our eggs in the Democratic basket. And, this significantly decreases our leverage to make Democrats embrace progressive solutions.

This brings me to a New York Times op-ed by Dartmouth professor, Brendan Nyhan, which came out on the same day as the article on the Republican reformers. The scholar pointed out that 46 percent of Republicans said there is not solid evidence of global warming, compared with 11 percent of Democrats.

Of course, that’s not surprising. What is, however, is that many of these Republicans are not the ignoramuses we are tempted to believe they are. In fact, they are fully informed of the facts, but they choose to reject sound science when it contradicts their backward belief systems. According to professor Nyhan’s New York Times op-ed:

In a new study, a Yale Law School professor, Dan Kahan, found that when he instead whether respondents knew the theory of evolution, omitting mention of belief, there was virtually no difference between more and less religious people with high scientific familiarity. In other words, religious people knew the science; they just weren’t willing to say that they believed in it.

What this amounts to is lower form of tribalism. You have otherwise smart Americas who are rejecting facts because their social peer group clings to fiction. They are consciously choosing to reject the latest knowledge at the expense of this nation. At the expense of their own children. At the expense of the future. They are embracing superstition rather than scholarship. And they know better – but prefer to deny truth out of loyalty to their sectarian tribe.

The implications of this research are huge. If you elect one party – the Democrats – you are getting science-based policies. When you elect Republicans, you get fiction instead of fact. And policies based on mysticism and magic. You get people like George W. Bush, whose policy on Russia was to look into Vladimir Putin’s eyes and search his missing soul. You get that fuzzy evangelical talk of gut feelings and hearts – but not much about minds.

The bigger question, is how can serious conservatives like Henry Paulson convince fellow Republicans to take climate catastrophe seriously when they think the solution is building a motorized version of Noah’s Ark?

The GOP reformers of the YG Network try to appear humble when they say, “the policy vacuum on the right has been the fault of think tank professionals, like us.”

In reality, there is a right wing policy vacuum because the base is vacuous. They are gullible dupes who believe in faith healing and the prosperity gospel, instead of medicine and economics. They are detached from reality, and as long as such people are considered the base, there will be no basis for reasonable and rational polices within the Republican Party.

In the foreseeable future we will not see reform in the GOP. Instead, we will hear from politicians like Florida Senator Marco Rubio who will deny climate catastrophe, even as the rising tides are already flooding parts of Miami Beach. He’s simply pandering and giving the base what they want – which is official sanction of their denial.

At some point, the few remaining reality-based Republicans need to jump ship – instead of trying to justify and rationalize the buffoonery of today’s silly conservative movement. They need to vote or work for people who actually share their values philosophy – which are clearly Democrats.

I’d love to know what you think. Are you surprised that Republicans aren’t as ignorant as they appear? That their objection to science and knowledge isn’t lack of information – but a conscious choice to reject facts that collide with their religious beliefs?