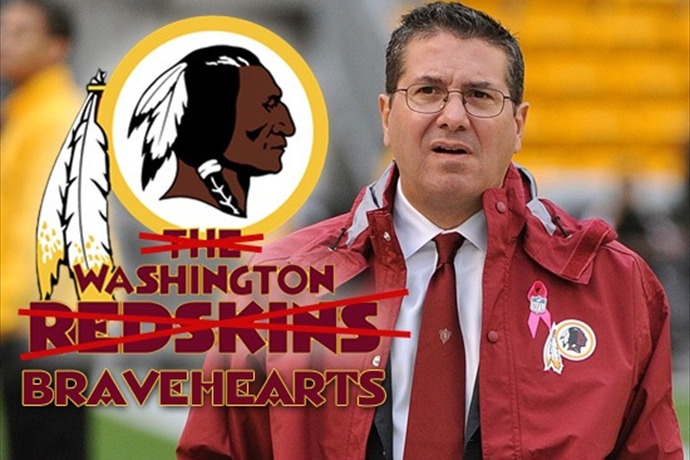 The Washington Redskins are under fire because people find the team name distasteful and offensive. But, I’m not sure how they’re going to replace the word “Washington.”

All kidding aside, The United States Patent and Trademark office have now weighed in on this ongoing controversy. The office cancelled six federal trademarks owned by the tram, saying the term “Redskins” was disparaging to “a substantial composite” of American Indians.

This ruling means that anyone can now create products using the team’s logo without authorization.

Pirated products. Cheap knock-offs. Now all of us can act like China.

Every man or woman has to pick a hill he or she will die on. A cause so near and dear to your heart that he will fight to the bitter end. That nothing – not loss of wealth or health or love or reputation will stand in the way of her mission.

Oddly enough, it appears that the owner of the Washington Redskins, Daniel Snyder, is willing to die on infamous Redskins Hill. What an absolutely foolish hill to plant your flag on. Snyder is a man who has everything, yet is willing to risk it all to stand boldly in favor of bigotry.

I’m sure the term Redskins was hunky dory at one time. Like before the civil rights movement and the gay rights movement. At a time when Archie Bunker was considered a mainstream kind of guy.

Daniel Snyder defends his position by saying that the Redskins name is part of a long tradition. But just because something has gone on for a long time doesn’t make it right or moral. In fact, most ancient traditions are somewhat backward or even barbaric seen through a modern lens.

Clearly, our country has become more enlightened in the past few decades. We can now see that things we once considered traditional values are really valueless traditions.

For example, once upon a time our nation endorsed slavery. At one time, women couldn’t vote. Gay people had to hide in the closet. There was even a time when Republican didn’t automatically mean irrational and closed minded, as difficult as that may be to believe. But times change. People evolv 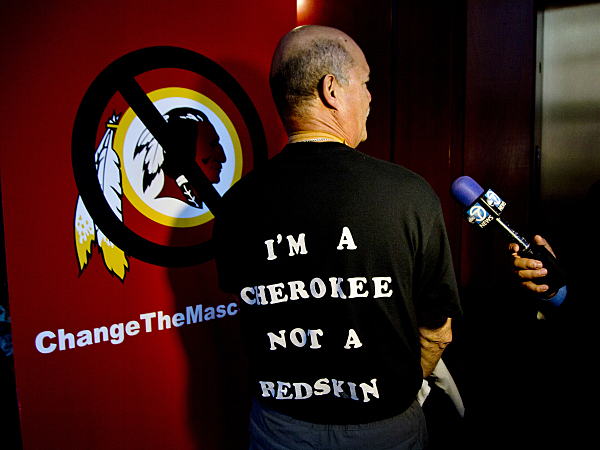 e with knowledge that gives them the ability to see the world in a new light.

To still use the name “Redskins,” even though Native Americans have repeatedly and clearly said it is demeaning, is outrageous, obnoxious and offensive.

One would think a savvy businessman like Snyder would actually see an opportunity in changing the team’s name. He could sell all the remaining team paraphernalia as collector’s items.

Of course, most fans wouldn’t want to wear the offensive old logo – so they would buy spanking new Redskins gear. This means tons of t-shirts, hats, sweatshirts, headbands, coffee mugs, footballs, and socks with the new team insignia.

Ka-ching! That’s the sound of some serious coin flowing into Snyder’s bank if he created a new name and logo. It is beyond astounding that Snyder is so blinded by legitimate criticism that he can’t see a name change as a financial boon for his franchise.

In the heyday of this football team, the offensive line was called “the hogs.” And in this tradition, Dan Snyder should put one of those plastic snouts they sell at the stadium on his face. Because is being pig headed.

Congresswoman Betty McCollum, a Democrat from Minnesota said it best:

“Be a hero to Native American children who suffer from self-esteem issues. Raise the level of integrity in the NFL. Be a hero. Say that times have changed, and you’re changing with them.”

If Snyder doesn’t come around and do what’s right, the National Football League needs to step in and force a name change. Right now they are fumbling on a controversial issue that won’t go away. It is an embarrassment to the league and tarnishes the NFL brand to have a team called the Redskins.

The league should want its fans discussing football, not foolishness. This is an ugly sideshow and a distraction that the NFL must end sooner than later.