Today, Donald Trump banned transgender soldiers from serving in our military. On a whim, our Comrade in Chief shamed America, betrayed our values, degraded our military readiness, and destroyed more than 10,000 careers.

This is an outrageous move by a monumental coward who was a college athlete until he suddenly had bone spurs, just in time for the Vietnam War, then miraculously healed when the war ended, and today can’t quite remember what foot the bone spurs were in.

It’s nauseating to think that our Putin-selected, draft-dodging President might be deliberately harming our military and running lives, simply as a diversion tactic from his obvious, and nefarious, ties to Russia, the removal of press secretary Sean Spicer, as well as his broken promise to build a wall and have Mexico pay for it, and his failed effort to reform healthcare. 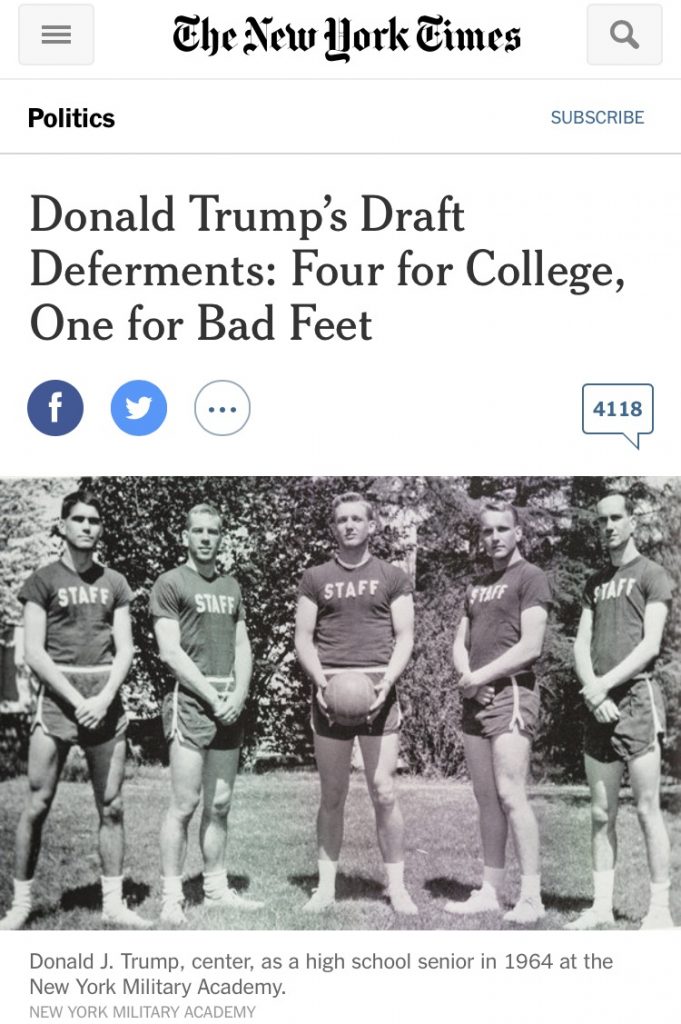 Given these disasters, Trump is the least popular president in modern times – having squandered his honeymoon period with a chaotic and backbiting West Wing, humiliating foreign trips, a failed legislative agenda, and his family and campaign staff’s secret meetings with Russian operatives.

On Monday, USA Today’s top headline was “Americans Split on Impeachment,” with 42-percent of Americans believing Trump should be removed from office. This is remarkable and unprecedented, considering he has only been in office for 6 months.

With the news bad, and getting worse, the president is desperate for distractions to get people talking about anything other than his lies, disappointments, weird Russia connections, and catastrophic presidency.

One misdirection play was Trump’s embarrassingly inappropriate, overtly political, Hillary Clinton bashing l speech to the Boy Scouts. He followed up this monstrosity with vicious attacks on Attorney General Jeff Sessions. When these efforts at distraction flopped, Trump upped the ante by banning transgender service members.

As usual, the Comrade in Chief announced a major policy change via Twitter. According to the presidential Tweets:

“After consultation with my Generals and military experts, please be advised that the United States government will not accept or allow Transgender individuals to serve in any capacity in the U.S. military. Our military must be focused on decisive and overwhelming victory and cannot be burdened with the tremendous disruption that transgender in the military would entail. Thank you.”

Once again, Donald Trump lied to the American people. The Rand Corporation reports that transgender medical care in the military costs one-one hundredth of one-percent of the annual military healthcare budget. In other words, it’s a rounding error – that will be far eclipsed in cost by litigation challenging the ban.

I’d also like to know how decreasing the number of soldiers helps with overwhelming victory? And, there is not one shred of evidence, by the way, that transgender troops harm readiness.

It’s worth noting, the Palm Center reports that 18 of our allies, including Israel and the United Kingdom, allow transgender troops to serve – with no problems to report.

Right wing groups, such as The Family Research Council, claim that transgender troops make some soldiers uncomfortable. That’s the same shallow, debunked argument used to ban African American troops, women in the military, and gay soldiers. The chicken little’s who said the sky would fall have been incorrect every time – and they are wrong again. Diversity has made our military stronger, not weaker. What has decreased America’s strength is Donald Trump.

Finally, would you rather have next to you in a Foxhole, a transgender soldier who fought to get into the military, or a president who fought to get out of it? Not to mention, his two “brave sons”, who murder helpless animals on expensive safaris, never served our country in Afghanistan or Iraq.

I think the real problem here is that the president is in foxhole – with his eyes glued to FOX News. He ought to put down the remote control and meet with transgender troops before making this consequential decision.

Unfortunately, brave trans men and women who honorably serve this country will have their careers ruined by a president who only serves himself.

This is Wayne Besen with your daily Reality Check. Until we meet again, have a great day.