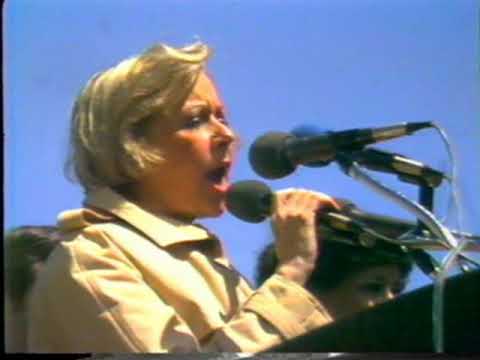 A Chicago icon and important part of the city’s history has departed. Jane Byrne, Chicago’s first and only female mayor has passed away. She was 83 – and still recovering from a stroke she suffered in 2013.

She burst onto the scene, winning the mayors race in 1979, after City Hall had failed to plow the streets after a snowstorm that shut down the city with over two feet of snow. Upon winning she declared: “I beat the whole goddamned machine singlehanded.”

That says it all.

By all accounts her one-term as the city’s mayor was challenging and tumultuous. Byrne not only battled sexism, but was bedeviled by the problems that affect all mayors in Chicago.

During her first three months in office she faced union strikes by the transit workers, firefighters, and public school teachers. These fights were downright bitter, with her opponents referring to her as “Calamity Jane” and “Attila the Hen.”

Though she tried to come back from this defeat, her historic one term as mayor was the pinnacle of her political career.

The last two decades of her life, Byrne receded from public view, earning her the moniker, “the forgotten mayor.”

Though her tenure in City Hall was rocky, there is no denying that Byrne was forward thinking – and we still feel the positive impact of her tenure. Her key accomplishments include:

Fortunately, this history-maker was recognized and honored before she passed away. In August, the Circle Interchange was renamed the Jane Byrne Interchange, and the City Council changed the name of the park outside Water Tower to Jane M. Byrne Plaza.

Mayor Rahm Emanuel had this to say:

From the entire WCPT family: Our condolences and best wishes for her surviving family and friends.

Jane Byrne left an important legacy for women nationwide. She was vibrant character full of soul, originality, and vitality. Jane Byrne a strong woman and a key part of our city’s great history. She’ll be remembered fondly and missed.

Previous post:
Obama Should Use The Element of Surprise on Immigration Reform Next Post:
New Chicago Archbishop Blasé Cupich a Repudiation of ‘Culture War Cardinals’
about the author: Wayne Besen