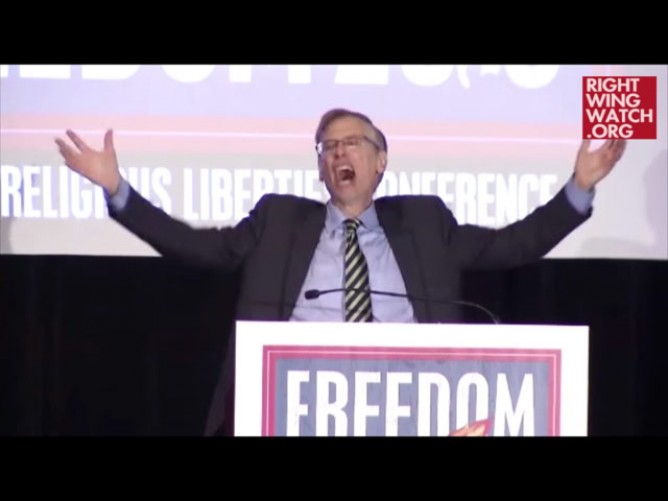 GOP Candidates Bow Down Before Bigots at Hate Conference

There used to be a time when sane politicians ran away from the insane. They would avoid embarrassing situations where they were photographed with loose cannons or people with loose morals.

In today’s Republican Party the script has been flipped. The candidates line up to fete the outrageous and the perpetually outraged. They have cemented their ties to the demented, kowtowing to kooks, crackpots, and crazies. A long line of losers (Kim Davis), lowlifes (Josh Duggar), and loons (The Duck Dynasty cast and Ted Nugent) are now Republican Royalty.

In the latest twist, three Republican presidential candidates have aligned themselves with Kevin Swanson, a twisted preacher who has a queer obsession with homosexuals. Instead of jettisoning, they joined Swanson in Iowa at his National Religious Liberties Conference, a forum to spin gay bashing into a defense of religious freedom. According to their warped logic, unless they can dehumanize LGBT people, these poor Christian “victims” are persecuted.

Former Arkansas Gov. Mike Huckabee, Louisiana Gov. Bobby Jindal, and Sen. Ted Cruz, cravenly appeared at the conference. By doing so, they gave their imprimatur to a rabidly homophobic preacher who believes that LGBT people should be executed. Well, not quite – the good reverend wants to give gays a chance to repent (aka convert) before he intervenes to take their lives in the name of the Prince of Peace.

Apparently, some people urged Swanson to tamp it down, as not to tar these presidential candidates with his rabid anti-gay ranting. He breezily dismissed these suggestions and went on a full-blown bigot binge.

Swanson’s rhetorical raw sewage oozed, squirted, and swished – until it spilled and then streamed into the pews. The stench is still fresh, fouling the atmosphere and soiling American politics.

During his sermon, Swanson reiterated his view that both the Old and New Testament require the death penalty for the crime of homosexuality, as well as his position that any Christian who attends a gay wedding can only do so in order to hold up a sign informing the couple that they ought to be murdered.

He said that if he found out that one of his own sons were gay and invited him to his wedding, he would create a spectacle to express his disapproval.

“There are families, we’re talking Christian families, pastors’ families, elders’ families from good, godly churches,” Swanson said, according to a video by Right Wing Watch, “whose sons are rebelling, hanging out with homosexuals and getting married and the parents are invited. What would you do if that was the case? Here is what I would do: sackcloth and ashes at the entrance to the church and I’d sit in cow manure and I’d spread it all over my body. That is what I would do and I’m not kidding, I’m not laughing.”

“I’m grieving, I’m mourning, I’m pointing out the problem,” Swanson bellowed as he described people trying to “carve happy faces on the sores” of a society that is utterly “messed up.”

It is astounding that the amoral empty souls who filled the putrid pews mistake this gutter-form of fanaticism as an actual religion. No, it is pure hatred in its most vile form, with the patina of Jesus to mask the monstrousness.

At the event, according to Right Wing Watch, a conference speaker “distributed literature at the event laying out how and why gay people should be put to death, discussing stoning and throwing people off cliffs as possible punishments.”

Not surprisingly, the mainstream media largely ignored this event, giving the three presidential candidates a pass. The one exception was MSNBC’s Rachel Maddow, who had an excellent segment that highlighted the radicalism of Swanson and the reprobates who enable his evil passions.

“It really was a ‘kill-the-gays’ call to arms,” Maddow said. “This was a conference about the necessity of the death penalty as a punishment for homosexuality…A pretty major theme of the event both in terms of the literature that was available at the event and the way the host of the conference spoke from the stage, a significant theme was the practical challenges and the timing of how exactly and when exactly the United States of America should start rounding up gay people in this country in order to execute them.”

Cruz, Huckabee, and Jindal are either extremists or extreme opportunists who pander to vultures to win votes. They know Iowa’s evangelical vote propelled Rick Santorum to victory in the last caucus and they hope to follow in his footsteps.

This is a shameful chapter in the GOP’s history and indicative of how low that party will go to achieve power.

Previous post:
White Flight From Political Reality is Deadly Next Post:
The GOP’s Shameful and Opportunistic Reaction to Terrorism in France
about the author: Wayne Besen