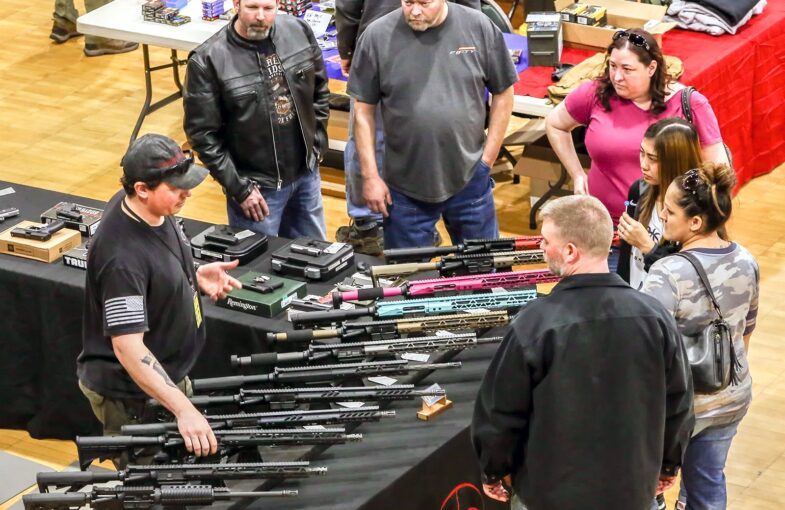 Hey gun nuts and gangs, why don’t you donate arms to Ukraine?

Americans are violent, yet charitable. Time to marry our two impulses to help defeat Russia

In an age of political polarization, here is a unique proposal to bring Americans together. Let’s ask our citizens to donate portions of their massive private gun stockpiles to Ukraine. There are 40 million Ukrainians who are valiantly fighting Russia’s barbaric, unprovoked attack on their country. They are in desperate need of the one unnatural resource we have in overabundance – firearms and ammunition. In a show of support and solidarity, we can supplement government supplies with private benevolence.

The Biden administration should be applauded for providing more than $2 billion in military assistance to Ukraine, with roughly $1 billion more last week. This includes a direct weapons transfer of 1,000 pistols, 400 machine guns and 400 shotguns. This sounds like an impressive array of weaponry, until one compares it the number of firearms haphazardly floating around the United States.

According to American Gun Facts, there are “an estimated 400 million guns in the United States between police, the military, and American civilians. Over 393 million (Over 98%) of those guns are in civilian hands, the equivalent of 120 firearms per 100 citizens. The average gun owning American has 5 firearms…There were nearly 40 million guns purchased legally by Americans in 2020 alone according to FBI records. This was higher than any other year on record.

The Small Arms Survey, a research project at the Graduate Institute of International and Development Studies in Geneva, found that the U.S. has nearly half the world’s firearms and this makes America the most armed country on earth. Clearly, we have more guns than we need or know what to do with. Meanwhile, Ukrainians can’t kill Russians with slingshots or by throwing stones. They immediately need more weapons and ammunition to ensure that they can send body bags home to Russia, which would increase domestic pressure on Putin to end his bloody war of choice.

So, attention gun nuts and gang leaders – you can make a difference in Ukraine today by donating a portion of your firearms and ammunition. Private charity can supplement our government’s efforts and give brave Ukrainians a fighting chance to successfully defend their homeland. The more they can beat back Russian advances on key cities and undermine the Russian military, the less likely Putin will be able to act on his warped ideology and megalomania. It would decrease the dictator’s efforts to expand his war beyond Ukraine. So, success in Ukraine would bolster our national security and could potentially save lives in NATO countries.

This is a political win for everyone.  Liberals are rightfully horrified by the number of guns in the United States. More Americans have died from gunshot wounds in the last five decades than in all the wars in American history. If we sent 50-100 million privately owned guns to Ukraine, progressives would rejoice as less guns would be available for wanton murder, armed robbery and school shootings.

Meanwhile, right wing conservatives could celebrate because their guns would be used to kill people. Obviously, they don’t own stockpiles of lethal weapons for hunting deer. They own weapons of war because many have sick, paranoid fantasies where they are Rambo, shooting up perceived enemies. But their murder weapons are uselessly collecting dust in country bunkers – a total waste of money and armaments.

Come on right wingers – if you donated 1/3 of your weapons to Ukraine to kill perpetrators of a genocidal assault, you’d not only be heroic, but you’d still have enough firepower to protect your beloved lawns. Or, for the more ambitious, stage another Jan 6-style coup on the U.S. Capitol. Don’t worry conservatives, after your gun donations, there would still be more than 250-350 million guns in circulation for weak cowards to “stand their ground” because they are petrified of an actual fistfight.

There is no excuse for toy soldier, right wing, couch-potato fantasists to hoard their weapons in a time of actual war. If Russian Nobel Peace Prize winner, Dmitry Muratov, can auction his esteemed medal, surely conservatives can give away some of their murderous metal that’s just taking up space in the garage.

Perhaps, the reason they haven’t already donated their firearms is because too many desire living in a Russia-like autocracy. They are fed propaganda points by Putin puppets like Donald Trump and Tucker Carlson. While they cynically wrap themselves in flag drag and look foolish with trucker convoys promoting a warped sense of “freedom”, they are selfishly withholding weapons from actual freedom fighters who are defending democracy from tyranny.

Meanwhile, the NRA would surely support partially draining the U.S. gun supply – because that would create new demand. They started out as a relatively benign organization that represented hunters and taught gun safety. Sadly, they fell victim to greed and morphed into a death machine, representing gun manufacturers. If Americans unloaded millions of guns to Ukraine, it would open the market for new gun purchases. After all, what red blooded American can survive with only five or ten guns for protection?

Finally, violent city gangs should chip in and donate a sizable number of guns to Ukraine. When I lived in Chicago, every summer weekend was a bloodbath. It’s time these hooligans did some good. At the very least, it would be a good PR stunt – showing that they stood for something other than killing school children and whacking unlucky citizens caught in their reckless crossfire.

Americans are a gun-worshipping, violent people. Paradoxically, we also have huge hearts and like to help the unfortunate. According to Giving USA, “Americans give around 3 percent of our collective income to charity — more than the citizens of any other country.” It’s time we marry our pathological need to arm with our empathetic impulse to give. Let’s put our private gunstocks to good use, by donating them to Ukrainians, who are on the front lines defending civilization from Russian savagery.

Previous post:
Is Putin the world’s first suicide bomber in a nuclear vest? Next Post:
The stark contrast between Clarence Thomas and Ketanji Brown Jackson is revealing
about the author: Wayne Besen