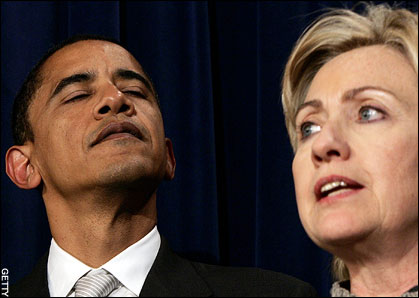 Hillary and Obama: Hug or Slug it Out?

Prior to the killing of 18-year old Michael Brown by police in Ferguson, Missouri, the world was abuzz with Hillary Clinton’s disparaging comments in the Atlantic about President Barack Obama. For example, she derided Obama’s foreign policy principle of, “Don’t do stupid stuff.” She also called his decision not to assist Syrian rebels at the beginning of their civil war as a “failure.”

I support Hillary Clinton and would like her to be the first woman president. I understand her need to differentiate herself from an unpopular president, particularly on foreign policy. But, why do it now – so far out from the election? I thought her comments were in poor form and bad taste. It was too soon and unnecessary. Hillary hasn’t even announced her candidacy – so there was no political need to kneecap the President when he’s vulnerable. Why not wait until 2015 to make such disparaging comments?

When Hillary doesn’t want to show her hand, she’s a world class pro at giving lame, insipid interviews to the media. This was a good moment for her to say the bare minimum and punt. There is a time and a place for her to assert her differences with Obama – but doing so now made it look like she was kicking him when he is down. If Hillary keeps this up, the President will endorse Joe Biden (or Elizabeth Warren). It won’t help Biden win – but it would certainly be a blow to Hillary’s momentum.

Obama has a closing window of opportunity until the media starts calling him a lame duck. What Hillary did was help Republicans in their efforts to prematurely slam that window shut. It was unbecoming and unworthy of a sophisticated woman and decorated public servant.

I could understand if a lesser-known candidate pulled this as a publicity stunt. But Hillary doesn’t need to do that. She can command media attention at any moment of her choosing. Hillary could refrain from saying another word for an entire year. She could stay holed up in her New York home with Bill, out of the public eye. And the moment she emerged from hibernation she would be the Democratic frontrunner. She would have a media entourage, oversaturating the airwaves with her sound bites.

So why become the center of attention now, when the president is engaged in a series of difficult foreign policy crises? His poll numbers have dipped and he has to deal with a very complicated, violent world. One, by the way, that she helped create with her vote to send troops into Iraq.

The President has to deal with naïve pacifists who oppose any intervention, and bloodthirsty warmongers, like Sen. John McCain, that seemingly want to bomb a new country each day. At this difficult and challenging juncture, Obama needs support, not sabotage – and friendly fire, really isn’t friendly at all.

Hillary tried to downplay the treachery by saying she would “hug it out.” But if you look at what she actually said, it seems she prefers to “slug it out.”

If she made the same comments next spring, I’d understand and support her. But, I just don’t think Hillary made a wise decision. It was premature and looked immature. As former Secretary of State, she has a stake in ensuring that this administration is successful, with a high Obama tide lifting her presidential boat. If Americans feel good about the direction of this country, it increases her chances of winning.

Furthermore, her policy prescriptions in Syria are questionable. She claims to have wanted to aid moderate rebels, but it remains unclear if genuine moderates were truly available for the United States to assist militarily. Many of these moderates were urban professionals, such as doctors and lawyers, with no military experience. This could have led to a disastrous situation where American weapons ended up in the hands of extremists. This is exactly what happened in Iraq, when the army abandoned its American-made weapons and they ended up in the hands of ISIS.

I also question the wisdom of Hillary’s book and subsequent tour – which opened her up to withering criticism and weakened her popularity so far out from the presidential election. She was already a household name, so why take the inherent risk of overexposure? I’m not sure whom her advisers are, but she needs to find new ones.

Hillary – I love you. But hold off on campaigning until 2015. In these challenging times, the President needs hugs, not slugs. Hopefully the pummeling she got during the book tour reminded her that the premature spotlight can be more searing than illuminating, and in politics the early bird runs the risk of looking like a worm.

Previous post:
Wayne Besen’s ‘I’ve Got Issues’ on WCPT (Aug 9 Edition) Next Post:
August 16, 2014 – A Discussion of the Protests In Missouri
about the author: Wayne Besen