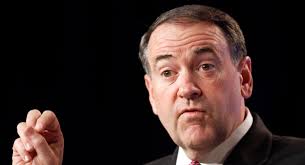 Huckabee: From Happy-Go Lucky to Harpy-Go-Nutty

In a desperate plea to scream “look at me” Mike Huckabee has jumped the shark. First he tweeted,

“Planned Parenthood isn’t a healthcare provider any more than Benghazi was a spontaneous protest.”

Then, in an interview with Breitbart, Mike Huckabee took his reckless and inflammatory rhetoric to a new, despicable level. In the article he wrote:

“This president’s foreign policy is the most feckless in American history. It is so naive that he would trust the Iranians. By doing so, he will take the Israelis and march them to the door of the oven…We are a nation of law—not emotions, not men, not money, not power—but a nation of law. Our worth and our value comes from a higher source, God. Not the government, but from God.”

How unbelievably vile and shameless it is for Mike Huckabee to exploit the Holocaust to boost his sagging presidential ambitions. What he said is insensitive and grotesque. This was nothing more than a pathetic, last-ditch plea for attention so Huckabee would finish in the Top 10 in polls to assure himself a place at the first GOP debates in August. It was meant for pure shock value to steal headlines away from The Donald, which is futile, because no one can out-Trump the actual Trump.

The transformation of this happy-go-lucky preacher into a “harpy-go-nutty” politician is jarring, but indicative of how the Republican Party has lost its way. Instead of Ronald Reagan’s “Morning in America,” America should be mourning the sorry state of the modern GOP.

Jewish groups expressed revulsion with Huckabee’s narcissistic attention-seeking overreach. Jonathan A. Greenblatt, national director of the Anti-Defamation League, said, “Comments by Mike Huckabee suggesting the president is leading Israel to another Holocaust are completely out of line and unacceptable. To hear Mr. Huckabee invoke the Holocaust when America is Israel’s greatest ally and when Israel is a strong nation capable of defending itself is disheartening.”

The National Jewish Democratic Council denounced Huckabee’s remarks: “They may be the most inexcusable we’ve encountered in recent memory. To state that President Obama is leading Israelis ‘to the door of the oven’ is not only disgustingly offensive to the President and the White House, but shows utter, callous disregard for the millions of lives lost in the Shoah and to the pain still felt by their descendants today.”

Predictably, Huckabee dug-in and refused to apologize. Ever since George H.W. Bush was labeled a “wimp” by his detractors on the far right, Republican candidates have embraced an implacably stubborn machismo. Even Lindsey Graham has taken a fruitless stab at it by destroying his Trump-compromised mobile phone in a blender. For the modern Republican candidate, saying “I’m sorry” is a mortal Sin.

Huckabee is the latest Republican to try to gain momentum by being rude, crude, and outrageous. While this may play with the GOP base, to normal people it looks classless and crass. It looks un-presidential.

Thanks to Obama, we are talking to Iran for the first time since 1979 and just inked a nuclear deal to avert us – for now – from a bloody and expensive war that Republicans would love to purchase on America’s credit card.

Last week, the American flag flew high on a U.S. embassy in Cuba. Shortly after reelection, Obama signed an environmental agreement with China. The president has led the way in leveling sanctions against the evil Putin regime – overcoming objections from some European counterparts. Obama has significantly reduced American troops in the Middle East.

My only criticism of Obama’s foreign policy is the Trans-Pacific Partnership, which, of course, is supported by Republicans.

Finally, Huckabee said, “Our worth and our value comes from a higher source, God.”

Huckabee’s loose God Talk was fine when he was a small-time country preacher in Arkansas. However, he is on the Big Stage and is running for a secular office that represents more than 320 million people with diverse beliefs and viewpoints.

Men who serve in government – not God – actually make laws. These laws were not printed on heavenly parchment, but paper paid for by taxpayers. Throughout history, there were periods when clergy ruled the West and they were called the Dark Ages and Medieval Times. Unfortunately, this is what Huckabee means when he says he is a good ol’ boy who will return us to the good ol’ days.

Previous post:
Establishment Republicans Should be Ashamed of What They Have Established Next Post:
Staged Planned Parenthood Vote Riles The Base
about the author: Wayne Besen