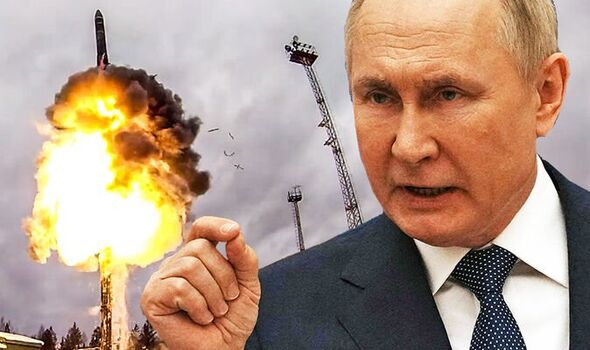 Is Putin the world’s first suicide bomber in a nuclear vest?

There is no World War III, Just an Extinction Level Event for Humanity

We have entered a precarious moment in human history that could easily spiral into Armageddon. Vladimir Putin appears to be a man with a 20th Century mindset in control of 21st Century weapons. The concept of all-out war, such as World War I and World War II, is obsolete but Putin doesn’t seem to know, or worse, is too mentally unstable to care. But, if the world’s nuclear, chemical, biological and cyber arsenals are fully unleashed it’s game over for humanity.

Russia has 6,257 nuclear bombs, while the United States is in possession of 5,500. Additionally, NATO allies, the United Kingdom has 225 and France 290. This is enough firepower to obliterate life on earth. Even if nuclear weapons aren’t detonated, modern life can be destroyed by sophisticated conventional weaponry too. In other words, there are no more victors in warfare, only losers. The United States alone has 14 Ohio Class Trident nuclear submarines that can unleash 4,032 nuclear bombs. Meanwhile, the Russian RSM-56 Bulava is a submarine-launched missile with nuclear warheads that deliver a punch 10 times more powerful than the bomb dropped on Hiroshima in1945.

There are also 200-ton intercontinental ballistic missiles that can break off into ten different explosions, each 40 times more powerful than the Hiroshima bomb. Good luck surviving the nuclear holocaust. Your little right wing country bunker with cheap, tasteless Alex Jones food rations isn’t going to save you.

Nuclear weapons aren’t all bad, in that the potential for mass devastation has likely prevented many conventional wars from breaking out and has thus spared hundreds of thousands of lives since the end of World War II. However, a doctrine of mutually assured destruction is only effective if the leaders facing off are cleaving to a modicum of reality.  All goes out the window when one side is governed by a sociopathic tyrant indifferent to human life. Is Vladimir Putin that leader, who is willing to sabotage humanity if he doesn’t get his way?

Putin’s savage behavior towards civilians in Chechnya, Syria and now Ukraine raises the uncomfortable specter that he is a profoundly sick man. When combined with his oppressive police state tactics at home, stamping out the free press and poisoning political opponents abroad, it’s fair to conclude that we are likely dealing with a psychopath. The situation is even more dire, when Putin’s mental disorders are married to the revanchist ideology of reassembling an overarching Russian State.

Putin ordering his nuclear forces to be on high alert only adds to grave concern about the Russian leader’s mental state. Not, to mention his incendiary threats to The West. “Whoever tries to interfere with us,” he warned, “should know that Russia’s response will be immediate and will lead you to such consequences as you have never experienced in your history.” He said that Russia “is today one of the most powerful nuclear states.”

If all-out war comes, it will happen in one of five ways – which all seem like distinct possibilities, given the trajectory of the bloody conflict in Ukraine.

The first scenario could arise through Putin exhausting our moral capacity for watching excruciating mass suffering on live TV. Will the populations of NATO countries be able to stomach the wanton shelling and starvation of Ukrainians without coming to their salvation? Will pressure build on politicians to use NATO airpower to feed, clothe, arm and shelter Ukrainians dying in droves?

In only two weeks of fighting, the U.N. refugee agency UNICEF has said that two million people have fled Ukraine, including one million children. How will the civilized world respond when Russia finally enters Kiev, starving, cluster bombing and brutalizing the population? Even today, hundreds of thousands of Ukrainians are somehow surviving without heat, water or electricity. How long can we watch the carnage from the sidelines? If we do react, this would bring NATO troops into direct contact with the Russian military. Then, what?

The second scenario involves Mother Russia using tactical nuclear bombs on the battlefield. What we have learned so far is that Russia’s army is overrated.

“The Kremlin spent the last 20 years trying to modernize its military,” said Andrei V. Kozyrev, the foreign minister for Russia under Boris Yeltsin, in a post on Twitter. “Much of that budget was stolen and spent on mega-yachts in Cyprus. But as a military advisor you cannot report that to the President. So, they reported lies to him instead. Potemkin military.”

Russia’s surprisingly weak and undisciplined army is cause for optimism, on one hand, but a cause for nuclear concern on the other. If Putin believes he is failing, he might turn to tactical nuclear weapons. This would help him militarily but would also send a signal to NATO that Putin would end the world before slinking home in humiliating defeat. If nuclear weapons were used in battle, how could NATO not respond? Then, what?

A third possibility is one where Russia attacks our humanitarian and military supply lines to Ukraine. This could be a purposeful action or accidental, given that our bases funneling weapons to Ukraine are in NATO countries bordering the war zone. The United States and NATO have delivered more than 17,000 antitank weapons, including Javelin missiles. The American weaponry is part of a $350 million package. Altogether, the United States has provided more than $3 billion in security assistance to Ukraine since 2014.

While I fully support arming Ukraine to the teeth, we must remind ourselves that these weapons are frying Russian tanks, downing Russian aircraft and sending body bags back home. At some point, these arms shipments could lead to a direct confrontation between nuclear powers. Then, what?

A fourth route to nuclear war is the draconian sanctions against Russia. If they have the intended effect on Putin, Russia could see them as acts of war and launch a counter offensive.

The sanctions are only getting harsher. President Biden plans to ban the importation of Russian oil into the United States, (although the U.S. only receives 10 percent of its energy resources from Russia.) Private companies are also acting. For example, Apple, Boeing, McDonalds and Shell are leaving Russia.

Of more immediate concern to Putin is The West cutting off the Central Bank of Russia from its $643 billion in foreign currency reserves. This has led to the ruble plummeting, with Russians lining up to withdrawal money from ATM’s or fleeing the country with bags of cash.

Russia’s opponents have been clear about the intention of sanctions. French finance minister, Bruno Le Maire, told a radio show that Western nations were “waging an all-out economic and financial war on Russia” to “cause the collapse of the Russian economy.” A spokesman for Prime Minister Boris Johnson of Britain said that the sanctions were “intended to bring down the Putin regime.”

Given that the goal is regime change, could Russia act similarly to Japan in 1941, which responded to a U.S. oil embargo by bombing Pearl Harbor?  Will Putin order Russia’s submarines to cut undersea internet cables or unleash its full cyber capabilities, potentially plummeting the worldwide economy into chaos and millions of people into destitution? Putin may feel that if the Russian economy fails, why shouldn’t the rest of the world share in its pain? If this occurs, then what?

The fifth possibility is the most dangerous, but not far-fetched. In this scenario, Putin is a New Hitler with designs of taking over large chunks of Europe. As an ideologically driven megalomaniac, he uses a victory in Ukraine as a launching pad to attack smaller NATO countries to test our resolve. There is a significant amount of evidence that he won’t stop at Ukraine, including the fact he is willing to endure crippling sanctions to move westward. If the devastation in Ukraine is only a warm-up act, then what?

Dictators are dangerous precisely because their malignant narcissism leads to conflating their personal fortunes with that of the country they lead. As his isolation grows, Putin is becoming increasingly paranoid. He and his goons are negating civil liberties and cracking down with brutal penalties for Russian protesters. The Russian tyrant is also likely concerned about potential war crimes tribunals and palace plotters, particularly if his war isn’t going as planned. Leon Aron, the author of “Yeltsin” explains, in historical terms, Putin’s potential peril in The Washington Post.

The Russian national tradition is unforgiving of military setbacks. Virtually every major defeat has resulted in radical change. The Crimean War (1853-1856) precipitated Emperor Alexander II’s liberal revolution from above. The Russo-Japanese War (1904-1905) brought about the First Russian Revolution. The catastrophe of World War I resulted in Emperor Nicholas II’s abdication and the Bolshevik Revolution. And the war in Afghanistan became a key factor in Soviet leader Mikhail Gorbachev’s reforms.

An additional possibility that could lead to the End Times is the Republican Party’s general stupidity, insincere duplicity and gender insecurity. Washington Post columnist Jennifer Rubin is onto something when she wrote, “In their head-spinning transition from apologists for Russian President Vladimir Putin to proponents of World War III, Republicans reveal not only their utter lack of principle but also their obsession with toxic masculinity.”

Too many Republicans think that war is a game and treat it with the unseriousness they do democracy in America. Sen. Lindsey O. Graham (R-S.C.), for example, called for Putin’s assassination. Given Putin’s narcissistic identity with the Russian state, and paranoid KGB tendencies, who’s to say that he isn’t taking Graham’s words seriously? What if Putin concludes its better to preemptively launch nuclear warheads than be taken out in an imagined CIA plot?

If that wasn’t disturbing enough, The Washington Post reported on a recent rant that former President Donald Trump delivered to adoring GOP donors in New Orleans.

Trump pondered whether the “the United States should label its F-22 planes with the Chinese flag and ‘bomb the s— out of Russia.’ … ‘And then we say, China did it, we didn’t do it, China did it, and then they start fighting with each other and we sit back and watch.’”

Yes, that would work brilliantly, until a plane was shot down and the captured “Chinese” pilot was a white English speaker from Oshkosh, Wisconsin. Then, we’d potentially be at war with China and Russia. Thank God Joe Biden is our President.

Trump, and his buffoonish band of shrugging sycophants, are pretending his comment is merely comedy. But lest I remind them that Trump is not only a con artist and reality show actor, but he’s also a former President. Such churlish musing might be perceived differently in the Kremlin or in China. I know this is asking a lot of Republicans, but please cut the macho act and become responsible adults. Our lives may depend on it.

We must be tough with Russia, but we also must be smart. In Vladimir Putin, we are likely dealing with a nuclear armed sociopath, guided by an outdated ideology, immersed with delusions of grandeur. Whether we celebrate New Year’s Eve in 2023 or 2024, may come down to Putin’s mood swing and ideology. If he believes dying with “dignity” is preferable to living with defeat, the world may be on borrowed time. Putin could be the world’s first suicide bomber in a nuclear vest. These are serious times with no obvious solutions. Let’s enjoy life today, because, as the Ukrainians reminded us, we don’t know what tomorrow will bring. Or, in this case, if there will even be a tomorrow.