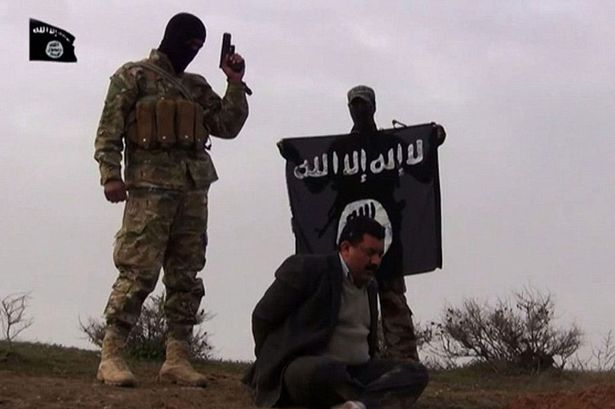 ISIS Needs To Be Eradicated

After the Cold War there was hope for a new order – one of peace and prosperity. If 2014 proves one thing – it is that this dream is dead. While there is no Cold War, we are forced to stare cold-hearted reality right in the face.

Which brings us to Iraq – the sand trap that keeps eating our national golf ball, when all we want to do is move on to the next green. Of course, we have to acknowledge that George W. Bush built the sand trap when he started his war of choice in Iraq. America is also complicit because of its continued cozy relationship with Saudi Arabia and Qatar, two nations that that promote, fund, and export Wahabbi and Salafi fanaticism. These backward teachings poison minds and create Jihadists across the globe.

When George W. Bush invaded Iraq, the United States created a vacuum filled by ideological monsters that are basically Jeffrey Dahmers who mask their murder in the guise of religious belief. The latest group, the Islamic State in Iraq and Syria, or ISIS, is so vicious that they make Al Qaeda look like boy scouts at an ice cream social.

These medieval barbarians beheaded American journalist James Foley. In response, America escalated its attacks on ISIS targets and threatened to bomb targets in Syria. As a progressive, I like to see military force used as a last resort. However, if there was ever a time to use our military, this is it.

There is simply no place in spectrum of humanity for those who fill the ranks of the Islamic State in Iraq and Syria. They are pure evil, a threat to civilization, and hell-bent on dragging the world back into the dark ages. I think the United States must do whatever is necessary to destroy these bandits – before their brand spreads and further metastasizes.

ISIS wantonly murders Christians, exterminates gay people like picnic flies, strips every bit of dignity from women, forces people to convert or die, and rules with iron fisted authoritarianism. In this particular case; in this rare instance; to stand for peace means to support wiping ISIS off the face of the earth.

Is ISIS genuinely a threat to the United States homeland? I don’t know. But I do know, that Iraqis and Syrians are people too. And they should not be subjected to extreme oppression and tyranny by religious nuts.

There was a terrific op-ed in the New York Times by Ed Husain, of the Council of Foreign Relations. He pointed out that 97-percent of Muslims are not Salafis or other types of radical fundamentalists. Still, three percent of a billion people can hold the entire Muslim world hostage, and place all of us at risk.

A powerful message must be sent to ISIS, that their deranged goal of a caliphate will never happen. Their pathological movement will be left in tatters and their leaders deceased. ISIS members say they aren’t afraid to die and want to be martyrs. Like the Make a Wish Foundation, we should rapidly make their dreams come true.

Meanwhile, Michael Foley, the brother of slain journalist James Foley, says that there’s “more that could have been done” by the United States to free his brother. He told the Wall Street Journal “our country’s hands are tied, in many ways, by the rigid policies that we tend to follow.”

The ISIS captors originally demanded $132.5 million from Foley’s family. Obviously, this wasn’t a serious ask and is beyond outrageous. But there have been several European reporters that have been released after their captors were paid ransom.

Personally, I think it’s a bad idea to pay ransom to murderous thugs. It only encourages them to find more hostages. Then, they perversely take the ransom money to buy weapons that are used to kill other people.

If we or the Europeans pay ransom to save a couple of lives – but in doing so fund terror weapons — the lives of other people in the Middle East will be lost. Just because we will never see or hear these victims scream or weep, doesn’t mean they don’t exist or their lives aren’t as worthy. We simply can’t pay for hostages and become an ATM machine for homicidal pirates.

There is no doubt the United States will be successful in its military objectives. However, the very fact we have to fight savages in the 21st Century is a sad commentary on the state of humanity in the modern age. While the Cold War has long ended, the end to war is nowhere in sight.

Previous post:
August 16, 2014 – A Discussion of the Protests In Missouri Next Post:
Join Wayne Besen at Sidtrack on Saturday, August 30 — for a LIVE broadcast of ‘I’ve Got Issues’
about the author: Wayne Besen