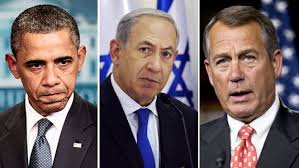 I am a fervent supporter of Israel, yet I bitterly oppose Benjamin Netanyahu’s speech in front of Congress. This disgraceful talk is the result of political collusion between House Speaker John Boehner (R-OH) and Netanyahu to humiliate President Obama, sabotage nuclear talks with Iran, and help the Israeli leader win reelection.

Netanyahu and his Rapture-seeking supporters in Congress claim that they are pro-Israel. Yet it is perplexing to see how this unauthorized congressional address helps Israel, when it has profoundly frayed relations between the two allied nations. The Iranian Ayatollahs themselves could not have invented a better scenario to undermine the once-strong U.S. and Israeli bond.

Netanyahu should go home and give peace a chance. Secretary of State John Kerry is working on a deal to scuttle Iran’s nuclear ambitions. We should try smart diplomacy and exhaust every option before we blindly rush into another costly and bloody war. Netanyahu’s urging of the U.S. to prematurely spill blood and treasure is reckless. If Israel succeeds in pressuring our nation into war, this will surely embolden every conspiracy-loving anti-Semite to come out of the woodwork and blame the Jews. Netanyahu should mind his own damn business and keep his face out of our domestic politics. If the Israeli leader wants to bomb Iran before peace talks are exhausted – he should do it himself.

Israel’s great strength is that it has bipartisan support. Netanyahu has squandered this advantage by snubbing President Obama and turning Israel into a satellite of the Republican National Committee. Lest he forget that 70% of American Jews voted for Obama and find the politics of the modern GOP repugnant. I applaud Democrats, such as Vice President Joe Biden and Sen. Elizabeth Warren (D-MA), for skipping Netanyahu’s petulant and partisan screed.

Israelis should vote Netanyahu out of office. His absence of vision, deployment of fear, lack of commitment to the peace process, undermining US and Israeli relations, and destructive pandering to Israel’s extreme right makes him unfit to continue leading.

What is the rationale for another Netanyahu term? Unless voters are happy with the precarious status quo, where an increasingly delusional, ultra-religious nation happily dances to patriotic songs while plummeting into the abyss, otherwise known as the future.

The curious part of the “Cult of Netanyahu” is that his supporters pretend to be the ultimate patriots who are protecting Israel. Meanwhile, under this “tough” leader, peace talks with the Palestinians have floundered and provocative settlements have expanded in the West Bank. I have yet to hear one lucid explanation on how these arrogant and oppressive settlements have helped Israel. They have done nothing but marginalize peace-seeking Israelis and Palestinians, created worldwide outrage at Israel, which has helped fuel a rise in global anti-Semitism and isolate Israel.

I could understand enduring such backlash if it was necessary for the security of Israel. For example, I favor Israel keeping the Golan Heights for strategic military advantage. I’m fine with the blockade on Gaza because instead of importing goods to better the lives of civilians, Hamas has used the sea to smuggle in arms and materials to build terror tunnels. Until the people of Gaza understand that a non-violent peace movement is the answer, instead of indiscriminately lobbing missiles at innocent Israeli families, they will be in a prison of their own making.

But the combustible settlements in the West Bank are in a different category. They are completely superfluous and do nothing to enhance Israel’s security. They are a sop to hardcore Israeli fundamentalist settlers that dream of a Greater Israel with borders from the Mediterranean Sea to the Jordan River. These settlements are also a bribe to America’s evangelical Christians, some of who believe that the Jews must control all of Israel for Jesus to return. The substitution of rational, clear-eyed domestic and foreign policy with kowtowing to religious extremists is what truly threatens Israel’s security.

I’m an American supporter of the Jewish State, but I refuse to drink Netanyahu’s tainted Kool-Aid. I’m not going to buy into his irrational, war-mongering, fear-based apocalyptic warnings – so he can appease the fantasies of paranoid religious zealots.

Israel needs forward thinking leaders that will genuinely pursue peace because it is in the long-term interest of Israel’s national security. Does an Israeli minority really want to be lording over a Palestinian majority in 10 or 20 years? How’s that going to play on the world stage?

If durable peace could be achieved with Israel’s archenemies, Egypt and Jordan, it could also happen with the Palestinians. In the meantime, as a United States citizen I’m appalled by Netanyahu’s brazen speech. The George W. Bush of Israeli politics should be criticized and ultimately snubbed. Then he should go home and lose his election. That would be the most pro-Israel gift imaginable.

One Response to Israeli Republican Benjamin Netanyahu Should Go Home