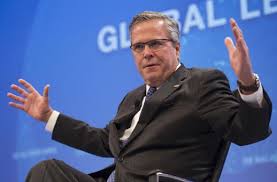 The Republicans love to call Jeb Bush the “popular governor” of Florida. Well he was popular, but only with Republicans. The rest of us not so much.

They also love to dub Bush the “Education governor” Again, not so much!!

He took aim at the public school system in his devious plan to privatize. He supported vouchers. He instituted something called Florida Comprehensive Assessment Test or FCAT testing – which is a corporate sponsored standardized test.

He also took aim at public school teachers and students. If Jeb Bush was the “education” governor, than why did most teachers despise him during his time in Tallahassee?

His unfair and logic-defying merit and punishment system tying teacher pay to test results gave administrators reasons to teach to the test and forgo real learning. This is why in a 2013 editorial, a Washington Post columnist wrote “the accountability system Jeb pioneered is in shambles.”

Recently a nonprofit group released thousands of e-mails showing how his Foundation for Excellence in Education has been working with public officials in states to write education laws that could benefit some of its corporate funders.

Former Gov. Jeb Bush has an undeserved reputation as an education reformer. Florida’s recent education progress has come not from implementing Mr. Bush’s policies but from cleaning up after them.

Mr. Bush has been visiting legislators in Tallahassee to talk about education policy. Get out the mops and buckets. Taxpayers also should reach for their wallets, since the former governor’s new big ideas involve transferring more public dollars to the for-profit companies behind him.

Gov. Rick Scott’s frantic reversals in preparation for a reelection run — he has called for teacher raises not linked to the FCAT — show how unpopular Mr. Bush’s education legacy is.

Mr. Bush’s fans note that Florida’s education rankings and results have improved. The dubious rankings give Florida credit simply for having “accountability,” systems even if those systems are bogus.

But the real victims were the students. His so-called reforms were nothing short of devastating. In his miserable test plan, children who did not pass were “retained” and it could happen more than once.

And keep in mind this humiliation and failure generally only affected poor and minority children. This caused havoc in the schools as teachers tried to educate children who were 2-3 years older than the other students in class. These older kids predictably acted out as class clowns or took on roles as class bullies. As troubling as the identity of clown or bully was – it beat embracing the embarrassing role of class dunce.

Instead of working to erase academic deficits though remedial education and moving children to the next grade with their peers, Bush chose to retain and humiliate. But how many 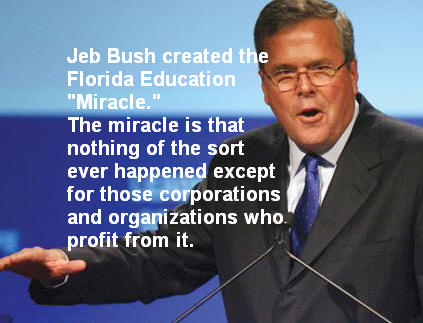 18-year-old High School students, stuck in the 10th grade, dropped out because of this ill-conceived plan? How much poverty, hopelessness, helplessness, and crime did Bush’s politicized educational model cause?

I’ll never forget a conversation I had with one Florida teacher who worked at a mostly minority elementary school. This teacher had walked in on a young girl curled up in a ball in the corner crying. The teacher asked what was wrong. The student said she had just failed Jeb’s standardized test and would be held back to repeat the same grade. Many of her friends were moving on but she wasn’t. She told this teacher that she felt like a failure and a skunk. She’s not a skunk, but Jeb Bush’s education plan sure stunk like one.

Bush is also truth challenged. He’s been touting his success in starting a charter school in Miami. With great fanfare Jeb paraded around with African American leaders touting the Liberty City Charter School, in one of the worst neighborhoods in Florida. This was his banner school – his poster school — that he boasted about to portray himself as the “Education governor.”

So, what happened to the Liberty City Charter School? It went out of business. It is gone. It is now defunct – and with any luck his presidential campaign will be too.

Jeb Bush is not an “Education Governor.” His signature issue is a bust and his so-called achievements are empty boasting. But unless you are from Florida, like I am, you might not know this.

Previous post:
Marco Rubio: A Fresh Face, with Policies that need a Facelift Next Post:
Ted Cruz: A Candidate for Deadbeats and Tax Cheats
about the author: Wayne Besen