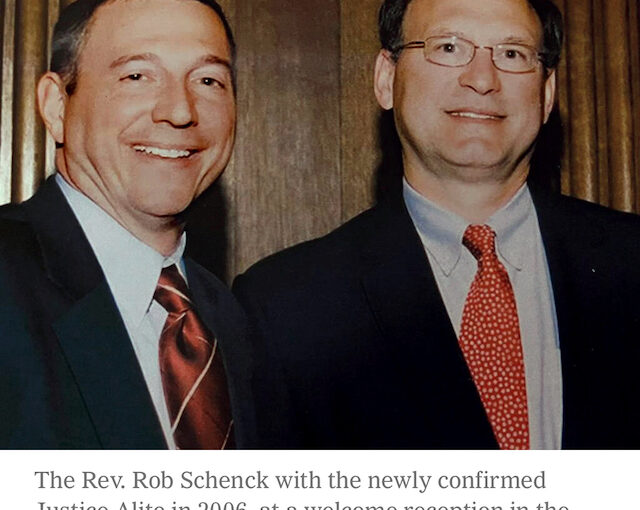 The United States appears to have two different Supreme Courts operating under the same ornate, marble roof. One has sworn fealty to a radical movement and the Bible, while the other has pledged allegiance to the U.S. Constitution and America. The conservative justices who have clandestinely, and sometimes publicly, bastardized and belittled the Supreme Court should immediately resign in shame and infamy. They have brazenly abused their positions of trust, lowered the court’s moral authority and turned our justice system into a partisan tool in an unholy effort to force Americans under the sway of their preferred churches. Their rulings increasingly seem like deliberate political acts from vengeful partisan hacks.

I don’t speak these words lightly and truly miss the days when we could trust in the institution of the Supreme Court. But the latest influence peddling scandal, among conservative justices, leaves no room for doubt that the High Court has reached a new low point. A whistleblower revealed to the New York Times that right wing Justice, Samuel Alito, prematurely revealed the outcome of the Hobby Lobby decision to a right-wing mega-donor—weeks in advance—with deep ties to the anti-abortion movement.

How did this happen?

On June 3, 2014, Ohio conservative mega-donors, Gayle and Donald Wright dined privately with Justice Alito and his wife, Martha-Ann. The following day, Gayle Wright contacted anti-abortion activist Rev. Rob Schenck, who led the nonprofit, Faith and Action. In an email-obtained by the Times, she wrote, “Rob, if you want some interesting news please call. No emails.”

According to Schenck, who now disavows his former right-wing views on abortion, Gayle Wright told him that Hobby Lobby would win its case and that Justice Alito had written the majority opinion. Additionally, the Wright family obtained prime seats at the Supreme Court to watch the Hobby Lobby decision in person.

“We were invited to use seats from Nino and Sam,” she had written to Schenck days earlier, using nicknames for Antonin Scalia and Samuel Alito. “Wow!”

Schenk explains why he is coming forward now: “What we did, was wrong…You can position yourself in a special category with regard to the Justices. You can gain access, have conversations, share prayer.”

In fact, Schenk’s organization crafted a cunning scheme in 2000 to procure influence with conservative Supreme Court Justices. He would recruit wealthy, high society conservative donors to cozy up to tainted justices like Alito, Scalia and Clarence Thomas. He dubbed his team the “Ministry of Emboldenment” and the dubious project “Operation Higher Court.” According to the Times:

Mr. Schenck recruited wealthy donors like Mrs. Wright and her husband, Donald, encouraging them to invite some of the justices to meals, to their vacation homes or to private clubs. He advised allies to contribute money to the Supreme Court Historical Society and then mingle with justices at its functions. He ingratiated himself with court officials who could help give him access, records show.

With such unscrupulous judges, clinging to right wing agendas, the effort was easier than expected.  The Times reports:

He [Schenck] gained access through faith, through favors traded with gatekeepers and through wealthy donors to his organization, abortion opponents whom he called “stealth missionaries.”

Wright often hunted with Justice Scalia, according to the businessman’s obituary, and the couple socialized with the Alitos, Scalias and Thomases. They hosted the Alitos at their retreat near Jackson Hole, Wyo., and the Alitos had the Wrights for dinner at their home in Alexandria, Va.

Mr. Schenck said he visited Justices Scalia and Thomas in chambers, where he shaped his prayers as political messaging, using phrases like “the sanctity of human life” to plea for an end to abortion. (Peggy Nienaber, who worked with Mr. Schenck, was recently recorded saying that the group had prayed with justices at the court.)

Is this the High Court or the Handmaid’s Tale? What’s going on here?

Seeking to go public with the truth, Schenck sent a letter regarding his being tipped-off on the 2014 Hobby Lobby decision to Chief Justice John G. Roberts Jr. So far, Roberts has failed to respond. This is instructive, because Robert’s Court is currently investigating the early leak of the draft decision to overturn Roe v. Wade.  Both opinions, favoring the extreme right, were written by Justice Samuel Alito.

Although caught in what appears to be a bald-faced lie, Alito says he played no role in either leak, while the preponderance of the evidence says otherwise.

It seems that Alito’s egotistical desire to be conservative folk hero and movement leader, has created a situation where his loose lips could sink the Supreme Court’s ship. Or, at the very least, further erode trust in the Supreme Court. This latest scandal comes on the heels of Justice Clarence Thomas refusing to recuse himself from Jan. 6 related cases, even as his “treason wife” Ginni, peddled the Big Lie conspiracy and labored intensely to overthrow democracy.

Democrats should vow to never again vote for a member of the Federalist Society, a conservative legal organization, that apparently grooms lawyers and judges who are devoid of integrity and often don’t seem to have allegiance to the U.S. Constitution.

At this point, expanding the court must be an option too. The current crop of conservatives is simply too corrupt, too unethical and too consumed by repulsive conflicts of interest to continue holding the reins of such enormous power. They have soiled the Supreme Court’s role as a fair arbiter of justice. The only balm for this catastrophe is the implicated Justices stepping down. But we all know they lack the morality and professionalism to put country before pet conservative causes.