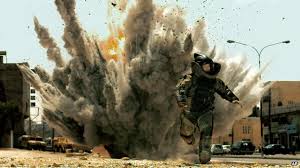 Mr. Obama, Stay Out of Iraq

Iraq is back—and that’s rarely good news. The country is rapidly sliding into a sectarian Hell and the Iraqi government has urgently called Uncle Sam for help. Leading Republicans on Capitol Hill are giddy for the chance to dive in and complete Mission Impossible. They are also relishing the opportunity to point fingers at President Barack Obama, accusing him of leaving Iraq for terrorists by withdrawing U.S. troops in 2011.

House Speaker John Boehner slammed the president, saying that Obama was caught “taking a nap.” Sen. John McCain (R-AZ), who would drop a bomb with his coffee each morning if he could, harshly criticized Obama.

“There is no strategy,” said McCain. “The president said he would not rule out anything. Is that a strategy? Is that a way to counter the Islamic State of Iraq and Syria?”

The Bush administration manipulated the media and terrified the public into supporting an invasion with empty threats of smoking guns in the shape of mushroom clouds. President Bush was warned of “The Pottery Barn Rule” by his own Secretary of State, Colin Powell: “If we broke Iraq, we’d own it.”

Bush and his Republican cohort, as well as more than a few Democrats, ignored Powell’s sage advice (and ultimately persuaded Powell himself to sell this farce at the United Nations) and attacked a country that had not attacked us first.

The ruinous decision to go to war was railroaded through with a huge PR campaign that relied heavily on FOX News propaganda. These dishonest efforts paid off, with many Republicans, at the time, confusing Saddam Hussein with those who flew planes into the World Trade Center.

A war mongering Republican administration foolishly shoved Humpty Dumpty off the wall, and now they are spitting mad at President Obama because he stopped trying to glue this hopelessly rotten egg back together.

I certainly hope Obama isn’t goaded into taking military action, just to prove to his critics that he’s tough. They are bitter because he didn’t go to war in Syria. These mindless hawks wanted Obama to poke the big, dumb, Russian bear in the eye over their invasion of Crimea. Now, they want the president to get involved in a brutal civil war with ancient roots between Sunnis and Shiites.

Iraq is flypaper for fanatics, where there is a thin line between our designated good guys and bad guys. Personally, I have more interest in a cable rerun of Kramer vs. Kramer, than being trapped in this ancient repeat of Allah vs. Allah.

In 1920, the British transformed historic Mesopotamia into an artificial entity known as Iraq. In doing so, three distinct groups, the Arab Sunnis, the Shiites and the Kurds, were shoved into a tinderbox and expected to live happily ever after.

When the Western powers went home, it took a psychotic strongman, Saddam Hussein, who bathed opponents in acid, to tame religious passions. Along came George W. Bush and his unresolved daddy issues. He overthrew this tyrant and for a decade the United States used its superior weaponry to play referee.

In 2011, when Obama withdrew the troops, the referee went home and these sectarian groups were left to their own devices. Republicans seem to believe that had we left the referee in Iraq indefinitely, these three groups might have forged a modern state. Conservative New York Times columnist David Brooks said:

“We’ll never know if all this effort and progress could have led to a self-sustaining, stable Iraq.”

Brooks fails to understand that the term “stable Iraq” is an oxymoron. There is no evidence that supports the idea that a functional state can be built. There is simply too much God to have a working government in Iraq. If you don’t separate mosque or church or Temple from state, it almost always ends in death and destruction.

This time, we should let Iran do the fighting instead of the United States. The Sunni insurgency has threatened to invade Karbala and Najaf to destroy Shiite shrines. Why should the US, who Iran calls “The Great Satan,” risk the lives of our soldiers to defend their holy sites?

If we are going to support any group in this endless abyss, it should be the Kurds. Let’s help them build a modern, peaceful state and make that our legacy.

If you break a vase at The Pottery Barn, you are obligated to clean it up and pay for the damage – but it doesn’t mean you have to work at the store for the remainder of your life. The U.S. spent billions of dollars and lost more than 4,400 Americans. It’s time to admit we made a tragic mistake by invading Iraq and leave the damn store, once and for all, before we end up breaking more pottery.