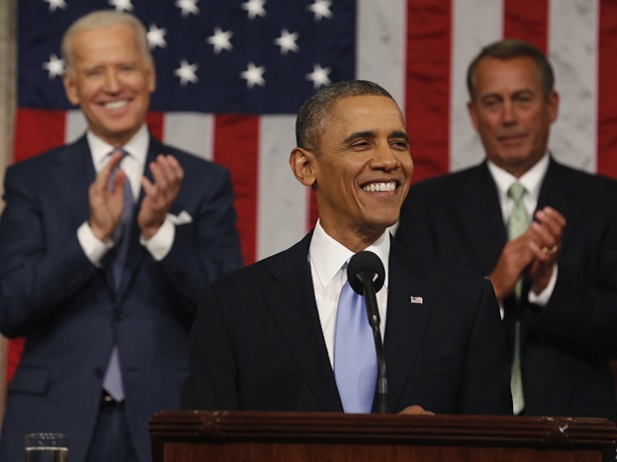 Obama: The Lame Duck is Soaring Like an Eagle

He was supposed to be a lame duck, but instead he is soaring like a majestic eagle – unloading a barrage of bird droppings at the puny Republican Congress below.

The president delivered a defiant State of the Union address. He thumbed his nose at Republican lawmakers saying, “I won’t be running again for re-election.” When they appeared giddy he retorted, “That’s because I won the last two.”

This punchy line reminds Republicans that Obama is the only politician with a true national mandate. Most GOP representatives in the House serve in protected gerrymandered seats in homogeneous “safe districts” with more cows than people. They hardly represent America’s ideological or demographic diversity, as the president surely does.

Some have criticized the president for not groveling at the feet of Republican leaders. These critics don’t seem to understand the purpose of a State of the Union address. This speech is an opportunity to seize the bully pulpit and advocate for policies that a president believes will best advance this nation.

Obama did so with a purpose and passion we haven’t seen since he first ran for president. Obama finally seemed to remember that he is the greatest orator of our generation and embraced the soaring rhetoric that originally made him a rock star.

His detractors are apoplectic. They believe that Obama should have given a somber speech. They wanted to see a chastened president crying in his beer over the midterm defeats.

The critics are flat out wrong. A State of the Union address is not the appropriate time to conduct negotiations with inflexible Republicans. It is not the time to offer bland, milquetoast compromises. It is the time to say, “This is who I am, what I want, and how my ideas will improve this nation.”

President Obama threw down the gauntlet. America now knows what the Democratic Party stands for. He created the parameters for the 2016 race. Here is Obama’s clear vision for his Party and America:

• We are about helping working people and the middle class. Our opponents are only about tax cuts for the wealthiest one percent

• We believe in equal rights for all people. The president was particularly strong on LGBT issues – acknowledging transgender people for the first time in State of the Union history.

• The president said we believe in a fair immigration system that strengthens this nation.

• We believe a healthier nation is a more productive and powerful nation. We are proud that 11 million more Americans now have access to healthcare.

• Obama said that he believes education should be the key to the future, not an avenue for crushing debt upon graduation

• The president basically said that we should fight terror – but not live in a state of terror, as we did under the paranoid Bush/Cheney regime

• We believe in a powerful military. But keeping the armed forces strong means avoiding costly quagmires that foolishly sap our strength both at home and abroad.

• We believe that anyone who works for a living should not have to live like a pauper. That’s why we believe in raising the minimum wage.

• We believe the scientific consensus that says climate change is real and man-made. 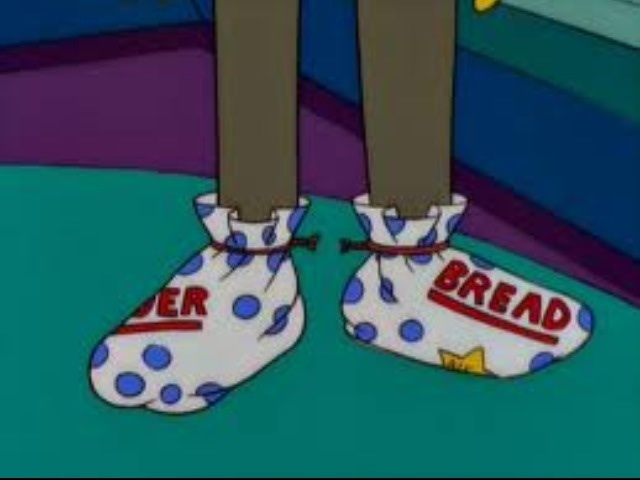 The President also reminded Americans that his policies have worked. The stock market is soaring, unemployment is down to 5.6%, gas prices are plummeting, we still have an auto industry, and confidence in the economy is growing every day. Had it not been for the GOP’s obstructionism, for example, opposing infrastructure spending at a time out nation suffered from high unemployment and a freeze on private spending, our economy would have recovered years earlier.

“If you disagree with parts of it, I hope you’ll at least work with me where you do agree,” the President said to Congress. “And I commit to every Republican here tonight that I will not only seek out your ideas, I will seek to work with you to make this country stronger.”

Unfortunately, the Republicans have so demonized this president, that when they actually do try to work with him their party nuts pop out of their shells and derail progress.

Ernst nostalgically spoke of how she wore bread bags on her feet as a schoolgirl to keep her shoes dry in the winter. Such indignities are what happen when government doesn’t intervene to help the poor. Thanks to Obama’s speech, people now know that the Democrats have an alternative plan to bread bags, which will actually put bread in peoples’ pockets.

Previous post:
January 24th 2015 – I’ve Got Issues: Ernie Banks passes at age 83, President Obama & The State of the Union, and Darrell West joins us to talk about wealth disparity in America. Next Post:
Scientists and the American Public at Odds
about the author: Wayne Besen