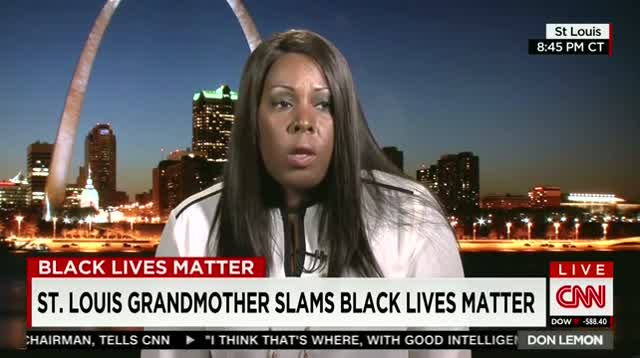 The death of a 9-year-old girl who was shot and killed in Ferguson, Missouri, while she sat in bed doing her homework prompted a spontaneous online video rant by Peggy Hubbard. In her viral video, she slammed the Black Lives Matter movement for what she said was defending thugs and focusing on police violence, when the real threat was black on black violence in low-income neighborhoods.

Her raw, emotional plea was understandable and touched a nerve. People enthusiastically lined up behind Hubbard in agreement, while others condemned her. They said she was giving ammunition to conservatives who want to blame African Americans and keep the status quo that includes frequent police abuse and rampant inequality.

Hubbard was correct to call out and condemn the mindless violence and sociopathic, often gang-related, bloodlust that has destroyed neighborhoods and caused families to cower in fear. However, she was incorrect to separate the bloodshed from the inequality and lack of opportunity that continues to plague the African American community. The two are not mutually exclusive and are deeply connected.

Would the dead-eyed, murderous young zombies that roam inner cities be that way if they had equal opportunity in education, access to good jobs, the ability to roam freely without police harassment, and a society that invested in their future? Would the “dead eyes” sparkle and come to life if anyone actually cared and offered a glimmer of hope and support?

We also can’t forget the impact of institutional racism that was craftily and deliberately designed to keep African Americans down. The primary reason we have concentrations of poverty (aka ghettos) is because up into the 1970’s African Americans weren’t allowed to move into primarily white neighborhoods. They were victims of red lining in real estate that froze them out of most neighborhoods. And, if they managed to get a home, the neighbors were often hostile – sometimes violent.

When this system of oppression finally began to break down, white Americans fled to the suburbs, taking money and business opportunities with them – and leaving depressingly large swaths of destruction and widespread economic destitution in many downtowns. One can drive through such neighborhoods today and witness how they are scarred with abandoned buildings and devoid of opportunity. If one is born into such a barren, economic landscape – replete with inferior schools and a scarcity of city services – illegal, violent economies such as the drug trade become viable options.

It is bizarre how anyone could still be in denial of the obstacles faced by African Americans. We have had a solid year of illuminating video highlighting how African Americans are routinely singled out and roughed up by police. Some of the abuse is financial, with cops targeting black people at disproportionate rates for traffic tickets. When these simple traffic fines can’t be paid, African Americans are slapped with penalties, leading to jail time – which often costs them their jobs. And, if they end up in front of juries, the chances are they will end up in jail with longer sentences.

African Americans also have a more difficult time receiving loans. It is more challenging to land jobs. On CNN’s State of the Union, University of Virginia student council president Jalen Ross pointed out that, “Every day, a black-name resume is 50 percent less likely to get responded to than a white-name resume.” He was referencing a 2003 study from the National Bureau of Economic Research called “Are Emily and Greg more employable than Lakisha and Jamal?”

A new study by Graduate School of Education at the University of Pennsylvania found that while black students represented just under a quarter of public school students in 13 states, they made up nearly half of all suspensions and expulsions

A new survey conducted by the Public Policy Research Lab at Louisiana State University found nearly four out of five white residents believe New Orleans has mostly recovered from Hurricane Katrina, while nearly three out of five blacks say it has not, a division sustained over a variety of issues including the local economy, the state of schools and the quality of life.

While a plurality of New Orleans residents rate the quality of life as about the same as before Katrina, the L.S.U. survey reports, more than one-third of blacks say it has gotten worse.

Meanwhile, conservative white America is becoming increasingly paranoid. A New Yorker magazine article points to a 20011 Harvard Business school study that found that more than half of white Americans believe that whites have replaced blacks as “the primary victims of discrimination” today, even though, “by nearly any metric statistics…continue to indicate drastically poorer outcomes for Black than White Americans.”

While Peggy Hubbard’s video was cathartic for some, the issue of race inequality and violence in America is not simply black and white. It is multifaceted, multilayered and comes in many shades of gray.