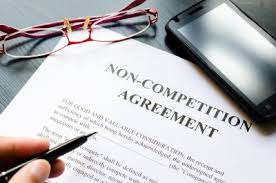 A lot of business owners claim they love capitalism. But the key to capitalism is competition. Yet, a lack of competition is directly written into its name – hence “non-compete.”

• The New York Times reports that there is evidence that shows wages in states that enforce non-competes are 10 percent lower than in states that limit or ban them.

• The Treasury Department says that 30 million Americans are tied by “non-compete” clauses.

• The New York Times reports that one-out-of-five workers is bound by a non-compete clause.

• Even people who are no threat to revealing sensitive trade secrets to a new employer are chained to these contracts. They include factory workers, ditch diggers, fast-food workers, and pet sitters.

This is outrageous, abusive, unfair, and absurd. Non-compete clauses exist for one reason: To keep workers locked in place, which undermines their bargaining position, ensuring fewer benefits and lower wages. After all, if a person can’t leave his or her current job, the boss can pay them whatever the hell he or she wants to.

New York Times columnist Paul Krugman described these arrangements as, “the road to serfdom, where employees are yoked to corporate employers the way Russian peasants were to their master’s land.”

Unscrupulous bosses will claim that people sign non-compete clauses of their own free will. But how many people living paycheck-to-paycheck are truly free to turn down a job offer to put food on the family table today – to protect their right to bargain for a future job? This is a luxury most people simply don’t have.

Especially in an economy where approximately 117 million adults stuck on the lower half of the income ladder have been completely shut off from economic growth since 1970. There has been close to zero growth for working-age adults in the bottom 50%. Are these people really in a position to turn down a job because it has a non-compete clause?

My words of wisdom to bosses: if your employee is so valuable and talented that she can do a better job than you if she leaves – well, maybe you should treat her better. Maybe you should raise her wages or give a better benefits package, instead of using coercion and the threat of career suicide to keep her on the job?

The American Dream is about second chances, new beginnings, and the freedom to reinvent and create a fresh start. The non-compete takes away any chance for new horizons and “makes or breaks” a person, often for life, based upon one experience, at one job.

How is that fair?

If the Democrats are wise, they will seize upon this issue and make it their own. It is time that all non-compete clauses are banned in every state.

This is Wayne Besen for the Progressive Broadcasting Network. This is your daily Reality Check.

Please sign up for my YouTube page. YouTube/WayneBesen
If you like my work, give a tax-deductible contribution today. Go to Truth Wins Out and press Donate.

Until we meet again. Have a great day.