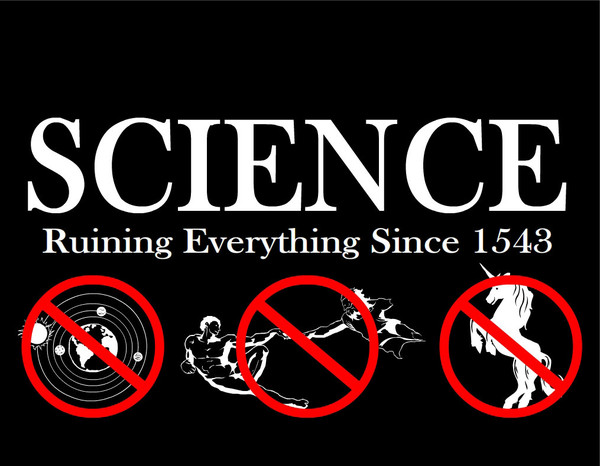 Scientists and the American Public at Odds

The American public and scientists rarely see eye-to-eye, according to a new Pew Research Center poll.

According to the poll, scientists aren’t too concerned about genetically modified food, pesticide use, and nuclear power, while those ideas spook the public. Scientists are more certain that man causes global warming, evolution is real, overpopulation is a danger, and mandatory vaccination against childhood diseases is critically important.

Based on these issues, I’m assuming that there are few scientists who vote Republican and even fewer that are Tea Baggers.

Sixty eight percent of scientists said it is safe to eat foods grown with pesticides, compared with only 28 percent of the general public. I can see why people are uncomfortable with this. Our interaction with pesticides is whacking roaches and rats. So, when we hear that there are pesticides in our food, our natural reaction is to think of Raid.

Ninety-eight percent of scientists say humans evolved over time, compared with 65 percent of the public. This is basic science. It is astounding that so many Americans still cling to backward religious teachings and mythology in the face of overwhelming scientific evidence. I guess this shows that we still have more evolving to do.

The Pew poll showed that 86 percent of scientists favor mandatory childhood shots while 68 percent of the public did. What is wrong with these people? It seems we need a vaccine against stupidity. And, who are the incompetent 14-percent of quacks against vaccinations and how fast can we have them fired?

Vaccines have nearly eradicated bugs that used to kill us. That’s why we don’t hear too much about polio, small pox, and measles. If a parent refuses to vaccinate his or her child, it is a form of child abuse.

“I’m not going stand up here and dispense medical advice,” Earnest said. “But I am going to suggest that the president’s view is that people should evaluate this for themselves, with a bias toward good science and toward the advice of our public health professionals, who are trained to offer us exactly this kind of advice.”

That statement is absurd. He sounds like Marco Rubio when he talks about global warming and claims he doesn’t know if it’s real because is he isn’t a scientist.

Thanks to a few selfish and thoughtless parents, measles is staging a comeback like a Rocky movie, with infection spreading to 84 people across 14 states, according to the CDC.

Fortunately, I do have some good news on the polling front. A new poll by Stanford University and the New York Times reports that 48-percent of Republicans are more likely to vote for a candidate who supports fighting climate change. While 47-percent believed that fighting climate change would hurt the economy.

Of course this is crazy, because fighting climate change requires new technologies, which create jobs. The problem is, that moderate Republicans tend to live in Blue states. And the presidential primaries are controlled by Red State flat earthers – and funded by people like the Koch Brothers, who essentially pay off Republican politicians to say they don’t think climate change is man made.

The poll also found that 67-percent of all poll respondents, including 72 percent of independents and 48-percent of Republicans said that they were less likely to vote for a candidate that claimed climate change was a hoax.

The real winner here is Al Gore. He took a heaping helping of abuse and mockery from right wing pundits and media. But now they are coming around to his position, with a national consensus emerging on Gore’s signature issue.

Back to the original Pew Poll: Nearly two-thirds of scientists favored building more nuclear power plants, but only 45 percent of the public did. More of the public, however, favored offshore drilling for oil and fracking than scientists did.

This is a tough issue, because we certainly do need energy. Unfortunately, all of the above options are dreadful. Nuclear power can lead to Three Mile Island. Fracking can lead to earthquakes and contamination of ground water. Offshore drilling can create destructive oil spills like we had with BP in the Gulf of Mexico. That’s why our country should invest in alternative energy – so we can transition to clean, safe, efficient ways to fuel our nation.

More than four out of five scientists thought the growing world population would be a major problem, but just less than three out of five members of the public did.

Maybe we should start listening to scientists with microscopes instead of politicians and preachers with micro-brains? If we did, the world would be a much better and safer place to live.

Previous post:
Obama: The Lame Duck is Soaring Like an Eagle Next Post:
January 31st 2015 – I’ve Got Issues: John McCain yells at protesters, Mitt Romney is out…again, and we take your calls to hear what you think.
about the author: Wayne Besen

One Response to Scientists and the American Public at Odds