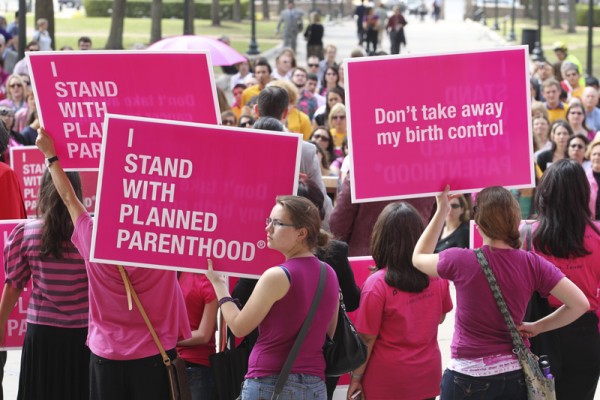 The Republican “War Against Women” continues, with a partisan vote in the United States Senate to eliminate funding for Planned Parenthood. The group is under fire after a fake non-profit, The Center for Medical Progress, filmed undercover video of discussions with Planned Parenthood executives talking about the transfer of fetal tissue for medical research.

The Republicans passed the measure 53-46. However, they did not reach the 60 votes needed to override a veto from President Barack Obama. So, this was more of a symbolic vote that allowed Republican presidential candidates to parade and preen in font of anti-choice activists. It was a show pony charade with no substance, just like empty Republican votes against Obama Care that accomplished nothing and wasted taxpayer’s money on political gamesmanship.

Two Democrats disgracefully joined the witch-hunt against Planned Parenthood – Sens. Sen. Joe Manchin (D-WV) and Indiana Sen. Joe Donnelly (D-IN). They should be ashamed of themselves for regurgitating GOP talking points and voting like Republicans.

Thanks to Planned Parenthood, abortions and unwanted pregnancies are at a 40-year low. If Republicans were really pro-life, they would give Planned Parenthood more money, not less. Instead they want to play politics with the lives of women and beat the drums of a bogus controversy.

First of all, Planned Parenthood did nothing wrong. The surreptitious and heavily edited videotapes actually reveal that the organization was not trying to profit off of fetal tissue. They were simply trying to break even and cover operational costs.

Providing fetal tissue for medical research is a good cause and should be supported – not skewered by shortsighted conservatives. The tissue is used to help find cures for ALS, Alzheimer’s disease, AIDS, cancer, and Sickle Cell anemia.

The question is, why don’t conservatives want to find cures for diseases? This proves, once again, that they are not pro-life and have a bizarre fetus fetish. They simply don’t give a damn about a person once they have been born.

Indeed, those who are howling the loudest about this research should be banned from using the medical advances that come from it. But we all know that these self-serving hypocrites will be the first in line demanding life saving fetal-based medications and therapies.

Here are some facts: 1 in 5 American women have visited a Planned Parenthood clinic. Federal dollars do not go towards providing abortions, unless rape or incest is involved. The federal money, that Republicans want to cut, is used for birth control, testing for sexually transmitted infections, and cancer screenings.

Abortions make up less than 10 percent of Planned Parenthood’s services nationwide. Planned Parenthood has roughly 700 health centers. Only a handful in three states have fetal tissue programs – which we have established are necessary for groundbreaking research that will lead to curing diseases.

The real scandal is not the videos supposedly exposing Planned Parenthood. The true outrage is that Republicans do not believe a woman has a constitutional right to choose. The real offense is that Republicans are kicking below the belt and sleazily taking underhanded actions to undermine women’s health. This is about a War on Women. This is about an ongoing, coordinated, strategic assault on reproductive rights.

The biggest joke of all was Sarah Palin whining about the evils of Planned Parenthood. Instead of complaining, Sarah should visit one of their clinics with her unmarried daughter, Bristol, who has had two babies with two different men. Bristol, a former abstinence spokeswoman for Candie’s Foundation, was paid $262,000 to avoid premarital sex and failed. She is Exhibit A of why planning parenthood is so important.

The question of abortion is between a woman and her doctor. Period. End of story.

There is no place for meddling, busybody politicians to insert their beliefs and ambitions for higher office into this decision. This is why the latest theatrical vote on defunding Planned Parenthood was an abomination designed to strike a blow against genuine liberty.

Conservatives like to claim there are options such as adoption. But the only thing most of these phonies are willing to adopt is lazy anti-choice political rhetoric. As for the unadopted kids, as far as conservatives are concerned they can rot away in cold state facilities or unceremoniously bounce from one foster home to the next. (Unless it is a home with loving gay foster parents — then these zealots want the kids snatched away and returned to the state)

With the Republican debates underway, there is no doubt that we will hear anti-abortion lectures from the various lecterns. Although there are 17 candidates, virtually all will spew the same, tired Party Line on abortion, with the hope of winning the endorsements of social conservatives.

Such extremism is awful for women and bad for America. It is time for conservatives to end their nasty war against women.