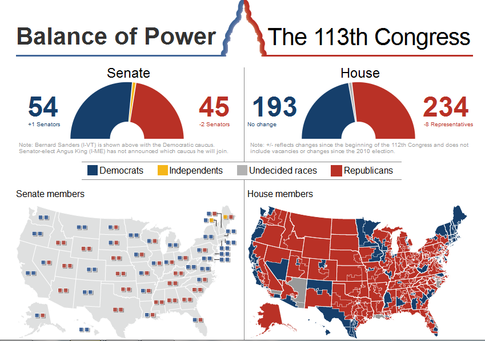 The 113th Congress is a Horror

We could create a new horror genre based on this Congress: Friday the 113th. It would star no one, there would be lots backstabbing and bill killing and it would leave our nation in critical condition.

Having accomplished virtually nothing for this country, the 113th Congress is slithering off for its summer vacation. Because if anyone deserves to relax in a hammock and drink lemonade by a shade tree – it’s your local Congressman.

Thanks to intransigent Tea Baggers, this Congress may be our worst ever. The New York Times reports that these losers have passed just 142 laws — 34 of them ceremonial — compared to the 151 passed by the same date by the last Congress, which produced fewer laws than any in history. By comparison, the infamous 1947-48 “do nothing” Congress passed 906 laws.

The GOP is the party of “no” and has been wrong about everything, even as they don’t actually do anything. With no record to run on, 40 percent of all midterm political campaign ads are anti-Obama. Thirty percent rail against Obamacare, as if insuring the poor and those with preexisting conditions is the epitome of evil.
Here is what is wrong with Congress:

1. The Supreme Court sold America out to corporations and billionaires who flood campaigns with unlimited contributions. Thanks to the Scalia/Roberts court, we are poised to shatter records with $2 billion spent on television ads on congressional races. This represents a sharp 70 percent rise since the 2010 midterm election. This grossly distorts the political process and elevates the favored issues of a few over the pressing issues of the many. The Supremes say that money is speech. If this is true, some Americans are now born with more speech than others.

2. Gerrymandering: the partisan drawn districts have made lawmakers captive to extreme special interests. This is especially true for Republicans. If they don’t spew the Party Line they will face lavishly financed Tea Bagger primary challenges. This has erased any chance for compromises – and without give and take, productive lawmaking ceases to exist.

3. The shortsighted Republican Party and stooges like Grover Norquist have relentlessly demonized all taxes and all government. This is why traditionally non-controversial issues, such as infrastructure projects or raising the debt ceiling, have lately become political footballs. It’s outrageous that filling potholes has become politicized. When purchasing concrete to fix bridges becomes controversial, don’t expect anything concrete to get accomplished on Capitol Hill.

4. The barely concealed racism against Obama. I’m not saying that the majority of Republicans are racist. But I am saying that racists are welcome in the Republican Party’s big tent. Gays aren’t welcome. Hispanics are tossed to the curb. But they always seem to have a place for the David Duke wing of the party. This has made it nearly impossible to be seen with Obama, no less cut deals with the president, because it is the equivalent of cutting a deal with the Devil.

5. Voter suppression. Having alienated virtually every minority, the GOP is losing demographic turf. Republicans realize that they can’t consistently win if they play by the rules. So they cheat. They have created obstacles and bogus issues such as voter ID laws to stop the virtually non-existent problem of voter fraud. They have closed polling stations or shortened weekend voting – or basically any measure that would make it easy for minorities to vote. This is bad for America and makes people lose interest in politics.

6. The media. The so-called liberal media is anything but. They are so terrified of being branded liberals by aggressive conservative hacks and flaks, that they often refuse to assign blame to Republicans for causing gridlock. In the effort to be fair and balanced, they create unfair and unbalanced stories in which Democrats and Republicans are equally culpable for Congress’ dysfunction.

7. The language and self-righteous certitude of the Religious Right has infected Congress like a virus. If God has positions on legislation – as the Religious Right asserts – then voting the “wrong way” is now a vote against God. This makes it nearly impossible to compromise because even the most basic issues are tied up in a paradigm of principles.

8. Voter turnout for the primaries this year is 14.8 percent. If people would just get off their rear ends and show up to vote we could fundamentally transform this country for the better. But they aren’t, so the wealthy puppet masters have even more power to manipulate the outcome of races or rent members of Congress.

It is up to you to save this country. You can either be demoralized or you can shape our nation’s destiny. I know what kind of country I want to live in. Do you?