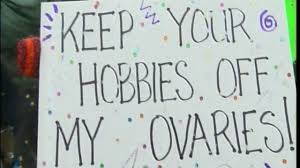 The Hobby Lobby ruling was absurd. The Supreme Court actually ruled that corporations controlled by allegedly religious families cannot be required to pay for contraception – even when their employees want it.

The Hobby Lobby case begins and ends with a circle you can’t square. This corporation claims to be religious, yet if they are who they present themselves to be – not a single one of their employees would take advantage of free birth control. They would be on the same page as Hobby Lobby. But, in reality they aren’t on the same page. Many of these employees don’t agree with their employer and would love to have access to free or affordable birth control.

What the Supreme Court did in their 5-4 ruling was elevate the religious beliefs of employers above the needs and beliefs of employees. In this sense, it’s a classic labor issue – with our Supreme Court, once again, choosing the rights of wealthy corporate owners over the interests of lowly workers – who mean nothing to the John Roberts court. This Citizens United court almost always helps the powerful over everyday people. For working people, who are employed for low wages at Hobby Lobby, not having access to birth control on their health plans can be a substantial burden.

And, let’s just stop for a moment to realize that in 2014, we are actually re-litigating the use of birth control – a debate that we thought was settled decades ago. But, the right wing never gave up and wants to deny women the right to control their own bodies or the ability to plan when to have a family. They want women pregnant early, so they have to drop out of school and get married – where they are dependent on a husband.

And in their desperation and helplessness, they pray that these trapped women will turn to religion to help ease their burden – which was ironically imposed in the first place, by religious institutions, which involved themselves with politics and lobbying – through which they changed the laws.

Here is something you need to know about many fundamentalist Christians. They want to bring back the 50’s – when women didn’t often work, had few options, and were controlled by men. The easiest way to do this is to deny birth control and then take away the option for abortions.

Ironically, the Religious Right’s polices actually increase abortions. You can’t be against birth control and then claim with a straight face that you are pro-life. Common sense and simple match dictate, that without birth control there will be more unintended pregnancies. Of these, many women will choose abortion.

But, of course, the Religious Right has always been insincere about abortion. Their real issue has always been the autonomy that the pill and reproductive choice has offered women. It modernized the world and liberated women.

The entire agenda for these right wing zealots is entirely dependent on sex having consequences. This is why they are against common sense birth control. The pill denied these busybodies the ability to wave their fingers the faces of women and “slut shame” them. To humiliate them and say, “Look how bad and loose you are. I told you so.”

This is also why they were so vehemently against sex education and condoms for gay men during the height of the AIDS epidemic. They preferred to have gay men dying in droves, so they could point the finger and show consequences – even if the Religious Right’s policies helped cause these consequences. When the rest of the nation was trying to save lives, these extremists fought tooth and nail against condoms and comprehensive sex education.

They also fought against needle exchanges for heroin addicts – which fueled the epidemic in cities. Again, they would rather scold a person for using drugs and manufacture unnecessary consequences than save lives.

For people who claim to be pro-life their brain dead rhetoric and backward policies sure lead to a lot of misery and death. These are ideologues that put their bizarre worldview before all. They don’t seem to care what happens to real people in the real world.

The Hobby Lobby decision – as well as a similar decision that allows Wheaton College to deny birth control – has led the Religious Right closer to its ultimate goal of setting up parallel structures that allow them to opt out of America. For example, they are for charter schools and home schooling, because they want to destroy public schools – and force all children into Christian schools on the public dime, where they can be indoctrinated. This is similar to Pakistan where the choice is often between having no education, or attending a Saudi funded madrassa. We see how well that worked out.

Steve Green is the president of Hobby Lobby, and has the twisted view that says, hey, “we’re religious, this makes us special, and we don’t have to play by the rules.”

This mindset is divisive, it is separatist, and rips apart the cohesiveness of America. We should have one set of rules that we all live by – without unreasonable exceptions carved out for religious extremists. The Religious Right talks a lot about Religious Liberty – but this needs to be put in perspective. To quote Sarah Jones, from Americans United for Separation of Church and State:

“The Green family’s definition of religious liberty isn’t drawn from the First Amendment. It is drawn from a belief common to the religious right: that they have a right to control the choices and moralities of other people.”

We have a presidential election coming up. Elections have consequences – most notably, the president picks Supreme Court nominees. Would you rather have Ted Cruz or Hillary Clinton picking these nominees?

If the Supreme Court gets one more pre-historic justice, it could set gay marriage back two decades. One more Scalia clone on the court – and you can kiss Roe v. Wade goodbye. Better save your coat hangers – you might need them.

Given the current composition of the Supreme Court – any woman who votes Republican ought to have her head examined. Any gay person who votes Republican, is clearly a delusional, self-loathing fool who needs serious professional help from a team of well qualified shrinks.

If a Republican wins the White House – and particularly if there is also a Republican Senate at the same time – you WILL see your rights eroded. We will go back in time. The wall separating church and state WILL be smashed. Our country will take an enormous leap backward – and we will catastrophically damage our future.

The nightmarish impact of the Hobby Lobby and Wheaton cases are already being felt. A dangerous slippery slope has been created.

Exhibit A is pastor Rick Warren of Saddleback Church, who also spoke at President Obama’s inauguration. Warren has joined forces with the head of Catholic Charities demanding in a letter, that President Obama include a religious exemption in his planned executive order that says, if a company wants a federal contract it can’t discriminate against gay employees. According to the letter:

“[W]e are asking that an extension of protection for one group not come at the expense of faith communities … Without a robust religious exemption, this expansion of hiring rights will come at an unreasonable cost to the common good, national unity, and religious freedom.”

I don’t get it. Federal contractors are not hired to perform religious duties. Uncle Sam isn’t hiring deacons and pastors. The radical idea that Rick Warren is proposing, is that he and others of his ilk get to collect tax dollars for federal work – but retain the right to hire and fire based on criteria other than job performance.

So, you might be the best at comforting the hungry or filling a pothole – but Rick Warren doesn’t think you should have job protections because you don’t share his beliefs or his sexual orientation while filling that pothole.

To Hell with Rick Warren – a man who poses as a person of faith – when he’s just intolerant and exclusionary. He claims to be a Christian, but his deity is discrimination and he bows at the altar of bigotry. There is nothing Christian about Rick Warren’s beliefs, unless Christianity now stands for an obsession with rooting out and firing good employees because of whom they love. What is wrong this man?

But, again, this highlights how the Supreme Court has opened a can of worms with its Hobby Lobby ruling. Anyone can now claim they are religious, and think that they are exempt from the rules. This will lead to an avalanche of frivolous lawsuits by religious provocateurs that think that their faith makes them superior to you and me.  Thanks to our radical Scalia-led court – these once fringe players and ideologies are actually beginning to win and change — some would say deface — the law of the land.

Previous post:
July 5, 2014 – Examining the Role of the Religious Right Next Post:
The Lousy Legacy of Richard Mellon Scaife
about the author: Wayne Besen