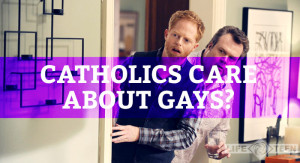 The Catholic Church took a tiny step forward this week, with a panel of bishops offering an interim report that carefully rationed a few tepid words of encouragement for gay people. Some LGBT activists, media, and scholars immediately hyperventilated, falsely billing the small tremor as “an earthquake.” Others jumped the gun and called the tortured, lukewarm statement “a wonderful breath of fresh air” – when it was more akin to lifting a manhole off a New York sewer in June. It provided welcome relief, for sure, but still had a stifling quality and an unshakable stench.

My skepticism is well deserved, but please don’t confuse my relative exasperation with an ungrateful attitude. The new statement is an improvement over the status quo. When so many lives are at stake, we can’t let the perfect be the enemy of the good – so a dose of optimism tempers my cynicism.

We must always remember that we are talking about an ancient institution that takes centuries to apologize for egregious sins, such as sexism, racism, slavery, rampant pedophilia, and virulent anti-Semitism. With the long view in mind, I’m just glad the Holy See is shifting its tone before the end of the century.

On Monday, the Vatican released an interim document that had some mildly upbeat verbiage, took a stab at sensitivity, and mostly avoided gratuitous homophobic digs:

“Homosexuals have gifts and qualities to offer to the Christian community. Are we capable of welcoming these people, guaranteeing to them a fraternal space in our communities? Often they wish to encounter a church that offers them a welcoming home. Are our communities capable of providing that, accepting and valuing their sexual orientation, without compromising Catholic doctrine on the family and matrimony?”

I’m not quite sure what the Church means when it patronizingly says LGBT people have “gifts.” Gay people are frequently some of the smartest and some of the stupidest people I’ve ever known. There are individuals with gifts, but even more who are tasteless and talentless. But, if the church wants to believe that we are all brilliant falsettos in the choir, or that we are capable of painting the next Sistine Chapel – who am I to dispel such flattering notions? I’ll take this part of the statement with a grain of salt and consider it a constructive attempt at gingerly tenderizing the Church for its eventual acceptance of LGBT people.

A nice touch in the 12-page report came when the existence of gay couples was tentatively recognized. The report said that some gay families provide each other with “mutual aid to the point of sacrifice” and “precious support in the life of their partners.”

Healthy gay couples also provide each other with satisfying sex and candlelit romance. Until the Vatican stops pretending it is desirable for gay people to live like guilty, neurotic eunuchs, they will remain second class citizens in the hierarchy of Catholicism. The moral solution for Rome is to enthusiastically embrace marriage equality – so gay Catholics can live complete, fulfilling lives.

Of course, I always have to remind myself not to take Roman Catholic reports or doctrine too literally. There appears to be an unspoken understanding with the laity that Church pronouncements on modern social issues are going to be laced with a certain amount of hypocrisy that’s best to ignore. The same way many American Catholics still love the Church, yet disregard teachings on divorce and birth control.

Yesterday, some overly-caffeinated pundits prematurely compared this week’s synod to the revolutionary Second Vatican Council, but by morning the bishops were having second thoughts. In response to bitter blowback by conservatives, the Vatican issued a statement saying that the report was a “working document,” not the definitive word from Rome.

The Pope dropped a trial balloon, it seems, and wanted to see how far it would rise before conservatives popped it. But if values have become a mere popularity contest, the Pontiff might next time consider placing a post on Facebook, so the treatment of gay people can be decided based on the number of “likes” his post receives.

The Vatican’s revisionary statement also claimed it wanted to welcome gays and lesbians in the church, but not create “the impression of a positive evaluation” of same-sex relationships. The message for gay Catholics: We have a place for you, as long as you know your place.

This is hardly inspiring, and it’s obviously demeaning, but it’s still undeniable progress for this notoriously slow moving institution. The report is a clear continuation of Pope Francis’ “who am I to judge” mentality, and an even clearer condemnation of anti-gay Catholic culture warriors, who are finding it increasingly difficult to engage in their favorite hobby of casting the first stone.