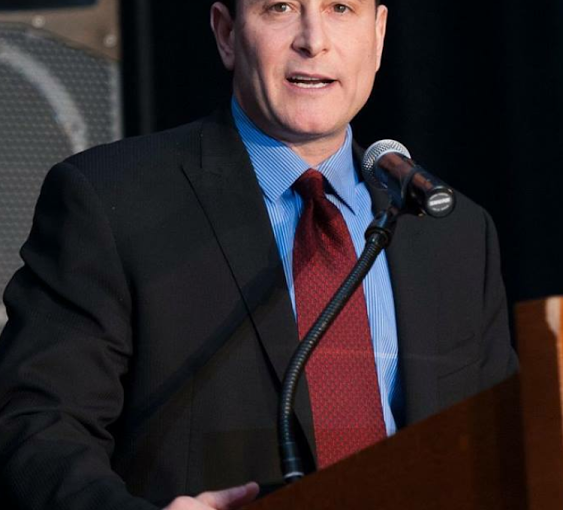 The choice we had was Hillary or Hell – and today we enter Hades. I said this was no ordinary election, but a fight for civilization itself.

Sadly, the Barbarians have stormed the gates and now occupy the halls of power. The world is stunned, the markets uncertain, and a vague future dangles over the precipice.

This is a painful loss. It is devastating. It is stupefying and America’s temporary bout of insanity and flirtation with autocracy will likely not end well. Many of you don’t feel safe today – and I can’t reassure you that you are.

However, we must hold our heads high and realize that we stand for what is great and good in America. We believe in equal rights, economic and social justice for all people, and empathy that extends beyond our own needs. This is a long struggle and we, as progressives, will continue to fight and organize and ultimately win.

My word to the corporate press: You built this Frankenstein by giving him billions of dollars in free media. Thanks to your lovely “coverage” we had a nearly fact-free, issue-free campaign. You sold out the American people to boost your ratings and sell more ads. You assisted in the disfigurement of Democracy by promoting a demagogue who does not respect the First Amendment. Congratulations, you now get to report from a cage of your own making – euphemistically called a press pen – while being viciously attacked by brown shirts.

Speaking of media – progressives need to create our own media institutions. The corporate media won’t lift a finger to help us and they actively work against our issues. But, we have no one but ourselves to blame. We have foolishly ceded the radio airwaves to conservatives – turning peoples’ cars into propaganda brain washing conservative apparatchiks, at a time when people are commuting longer than ever before. While conservatives have FOX News Channel and much of the new programming on MSNBC – we have nothing on cable television. We have few platforms to disseminate our messages – which allows radical conservative ideas to go unchallenged and be presented as mainstream, rather than extreme. This is a monumental failure that we must own – and if this isn’t changed this bleak day will repeat itself over and over again. We can’t succeed if we are mere voices in the wilderness. And in this election cycle, conservatives, who were late adapters to technology, had finally caught up to us with online messaging.

As for Hillary Clinton – she was successfully defined as a status quo politician in a year when people were seeking change. Could Bernie Sanders have prevailed or would his Democratic Socialist label doomed his chances? We don’t know the answer to that. However, we do know his message was more in tune with the current electorate and would have had a better chance of stopping Trump’s successful Rust Belt strategy. As Democrats and Progressives we will have to pick up the pieces and see where we go from here.

To Hillary Clinton and those on her staff. We owe you our gratitude and sincere thanks. No candidate in history has had to endure more scorn and millions of dollars in attacks, not to mention a sick Republican candidate who delights in humiliating women. How much did resistance to a woman as president play in her defeat? How significant were the actions of FBI director James Comey?

Hillary, thank you for your service to this country and for fighting the good fight. You tried mightily to break the glass ceiling and came pretty close.

I guess if you want to look at this with the glass half full: At least it’s not Ted Cruz. With the glass half-empty – think about Attorney General Rudy Giuliani, White House Press Secretary Sean Hannity, and then you’ve got right wing zealot Mike Pence waiting in the wings if anything happens to Trump.

On Monday, I warned you that I was uncomfortable with the electoral map. I’m saddened to say that my worst fears have come to fruition. (Discuss Map)

I’m actually sugarcoating it, when I say that the election vulgarian, Donald J. Trump, is an unmitigated disaster of historic proportions. America just thrust a thin-skinned vindictive, know-nothing, mentally ill school-yard toddler on the world stage – and this nation must reconcile its lofty words and high-minded ideals with this unconscionable mistake that we will very quickly come to regret.

To paraphrase the great singer/songwriter Ani DiFranco – as bad as Trump is – he’s worse than he seems. If past behavior is the best indicator of future behavior – we, as progressives, are in for a very long four years.

But, as I warned, this nightmare will stretch beyond Trump’s term. With Republicans in firmly in control of Congress – we will lose the Supreme Court. If Donald Trump wants to heal this nation he must instruct Republicans to confirm Merrick Garland for the Supreme Court. If he does not do this, our nation will remain bitter, and defiant, and see Trump’s first Supreme Court nomination as barely legitimate and many will see it as a coup of SCOTUS. Trump’s new nominee, if confirmed, will always have an asterisk next to his or her name.

Speaking of the Supreme Court – we may have lost it for a generation – as I had repeatedly warned. You can now kiss Roe v. Wade goodbye. Say hello to back alley coat hanger abortions and an underground black market of abortion inducing drugs that will threaten the health and well being of women.

The hard-fought gains of LGBT people are now in peril. A right wing Supreme Court even puts marriage equality in jeopardy. Could you imagine tens of thousands of gay couples married today – and forcible having their marriages dissolved by the state tomorrow? This scenario is no longer unthinkable.

Trump has said that he has a secret plan to end violent crime in Chicago. Like you, I anxiously await this magic plan. Won’t it be nice when the gangs are gone and the streets are safe?

With the advent of cell phone cameras, we can now capture police abuse and upload it to social media for the world to see. Trump’s answer to such abuses is “stop and frisk” on steroids, and reflexively backing police, even if officers have committed criminal behavior. I’m terribly afraid that if this his how a Trump administration responds to cases like LaQuan McDonald, there will be civil unrest in our cities.

Millions of Americans may now lose their health insurance. The Affordable Care Act will soon be gone. The Republicans have offered no suitable replacement. Once again, we may return to the dark days when profiteering insurance companies act as death panels, and getting sick means losing everything.

We will return to voodoo, trickle-down economics, when tax-breaks for the rich are bizarrely considered a stimulus for the economy that increases tax revenues. Those very same blue collar voters who helped elect Trump will see their prospects further diminished – but, no doubt, Trump and Pence will provide no shortage of convenient scapegoats to keep these people distracted to the actual cause of their plight.

Criminals, terrorists, and the deranged will continue to get weapons of death as guns proliferate.

Citizens United will be the law of the land and campaigns will be flooded with cash – so plutocrats can buy elections.

The scientists tell us that climate change threatens our very way of life. But, Republicans remind us that they aren’t scientists and don’t believe in science. The Paris Accords are effectively dead and we will lose precious time holding back the rising tides. With American leadership gone, developing nations will no longer feel bound to address climate change, creating a downward spiral that will imperil generations to come.

College will continue to be unaffordable and a financial albatross around the neck of graduates. They will begin their lives in debt – with limited prospects.

The crime aggressive crime syndicate known as Russia has a new ally. Since Donald Trump never released his tax returns, the origins and closeness of that sinister relationship remains murky.

Neo-Nazi’s, anti-Semites, gay bashers, Muslim haters, and white supremacists across the globe are ebullient. Trump’s victory, combined with Brexit, have catapulted these “deplorables” to power. Perverse and hateful ideas that were only spoken in whispers on society’s fringes, will now be given a prominent voice on the world stage. No doubt, every right wing group in Europe, from Golden Dawn to the UK Independence Party to the National Front – will be mightily encouraged and emboldened.

Then there is the matter of war and peace. Donald Trump had harshly derided the nuclear deal with Iran. If that deal is thrown on the trash heap, does that mean we are going to war? And if so, how many of the chicken hawks who voted for Trump will volunteer?

Trump promised to wipe out ISIS. We ill need ground troops for this. How many will Trump send?

And, then there is that matter of the wall on Mexico’s border. Donald Trump has said that Mexico will pay for it. They said they wouldn’t. What happens now?

Trump promised a trade war with China. What would this do to our economy?

Will unions have a future? Or, will America be a strict right to work country?

This is a tragic day and the first step in a long, dark journey into the unknown.