The GOP won control of Congress by promising the American people that they would be responsible adults and finally get gridlocked Washington to work.

Far from displaying wisdom and maturity, the Republicans have acted like college freshman at a keg party. The week began with a Tea Bagger mutiny. Two-dozen Republican members declared war on John Boehner, voting against him as Speaker. This was the largest number of votes against a speaker in at least 20 years. A few of the star Tea Baggers that staged the revolt are Representatives Daniel Webster and Ted Yoho of Florida; Louie Gohmert of Texas; and Steve King of Iowa.

These extremists had no chance of winning – yet they impotently staged a laughably failed coup so they could be stars on right wing talk radio. In doing so, they wasted time and threw beleaguered taxpayer’s money in the garbage. They proved that Tea Baggers don’t take their jobs seriously – and they view Congress as nothing more than an audition for a hosting job at FOX News.

It’s understandable that these ridiculous renegades might get out of line. But the Republican leadership is acting nearly as arrogant and irresponsible. For example, why are Republicans trying to get a vote on the Keystone XL pipeline when President Obama said he would veto it?

Instead of beginning the new Congress by working on bipartisan legislation that has a chance of becoming law, the GOP is trying to get a futile vote to impress Republican donors or improve their individual ratings with the American Conservative Union. Who do these public servants work for, the 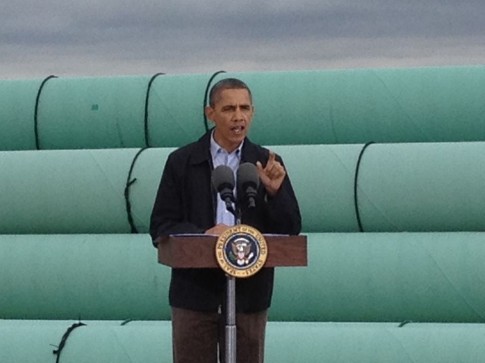 The GOP promised that if elected they would do more than simply make points – they would make actual laws. But they are proving, once again, that they are not lawmakers, but noisemakers and newsmakers, with no ability to govern a modern country.

Republicans rather complain than compromise; whine than win; and they strongly prefer posturing to legislating. If this charade continues, this Congress will surely go down as even less productive than the last one, which would be a rather remarkable, if not dubious, achievement.

“The president threatening to veto the first bipartisan infrastructure bill of the new Congress must come as a shock to the American people who spoke loudly in November in favor of bipartisan accomplishments.”

That’s certainly the height of hypocrisy. In 2008, Barack Obama was overwhelmingly elected on a platform of ending gridlock in Washington. Obama’s powerful message was that we are not Red states or Blue states, but the United States of America.

In spite of the clear voter mandate to curtail partisan bickering, on Obama’s first week in office McConnell said that his primary goal was to make Obama a one-term president. I wonder how the GOP and right wing media would react if President Obama said today that his number one priority for the upcoming Congress was to make Mitch McConnell a one-term Majority Leader?

The president has every right to thwart the GOP, given how McConnell, who was then the Minority Leader, sought power by paralyzing Washington and undermining Obama’s presidency. The President, however, cares too much about America to crassly and counterproductively employ McConnell’s senseless strategy.

It should be clear by now that Republicans are a threat to the unity and stability of this country. They don’t appear to view Democrats as legitimate elected leaders, and this dangerous mindset allowed them to justify their disastrous turn from loyal opposition to disloyal obstruction.

Now that McConnell holds the gavel, he inexplicably expects Obama to roll over and rubber-stamp his right wing agenda. If the GOP were sincere, it would have started this Congress with bipartisan legislation that could have resulted in success – but they chose posing over passing laws.

Paradoxically, had Republicans begun this session in good faith, by working with the president on mutually agreeable items, they may have eventually paved the way for the Keystone XL pipeline.

McConnell could have, for instance, sweetened a potential deal by agreeing to an XL pipeline corporate tax that would have funded research and development for alternative energy.

However, this would have required genuine compromise for an uncompromising party of truculent insurgents who are experts at pouting and incapable of producing. To the modern GOP, the idea of “give and take,” is that the Democrats give absolutely everything and the Republicans gleefully take it. That may be how it works in a dictatorship, but not in a democracy. Sometimes it appears that the Republicans don’t know the difference.

When you throw in the shameful episode of House Majority Whip Steve Scalise having spoken at a David Duke conference, the GOP’s first week in power was every bit as predictable as it was pathetic.