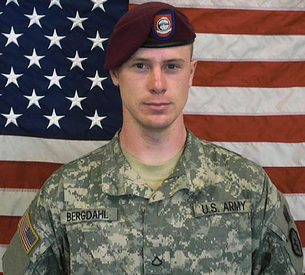 The GOP’s Most Unpatriotic Attack On a Soldier

We begin with the topic of the week, the rescue of Sgt. Bowe Bergdahl.

President Barack Obama was correct to rescue Sgt. Bowe Bergdahl. This isn’t about whether he deserted his post, but whether America will desert service members in their darkest hour of need. Of course, we all prefer unambiguous, heroic endings, such as when former NFL football player turned Army soldier, Pat Tillman, was killed by foreign enemies in Afghanistan. Oh, wait, that was a tale from the Bush PR machine hiding the fact that Tillman had been killed by friendly fire.

Once again, Republicans are turning what should be a unifying moment into a divisive political issue. The visceral hatred for our black president runs so deep that many GOP lawmakers are reflexively petty and partisan. Last week, the Republicans were mindlessly attacking Michele Obama’s effort to have school cafeterias serve healthy lunches to students. This week, they have degraded this nation by suggesting we should leave an American soldier in the hands of the Taliban.

Former U.N. Ambassador under George W. Bush, John Bolton, bitterly companied that what Obama did was “negotiate with terrorists…for the exchange of hostages.” Florida Sen. Marco Rubio whined that the deal “could encourage future terrorist kidnappings of Americans.”

Are Bolton and Rubio really suggesting that last week the Taliban was allowing American tourists to happily stroll in the bazaar’s of Kandahar – yet thanks to Obama’s POW trade, they are now out to get us? This line of so-called reasoning is ludicrous beyond comprehension.

If the policy of America is to abandon those who damage this country – then I guess we should leave Bolton and Rubio behind if they are ever kidnapped. After all, they continue to grievously harm this country with their wacky ideas and pathological obstruction of our president.

Even more pathetic is Sen. John McCain, who four months ago said:

“Obviously, I’d have to know the details but I would support ways of bringing him home and if exchange was one of them I think that would be something we should seriously consider.”

Now that Obama did exactly what he suggested, McCain has predictably changed his tune.

“I would not have made this deal,” McCain said this week, calling the exchange “troubling” and a “great threat.”

No, a great threat is choosing Sarah Palin to be Vice President, putting her one heartbeat away from controlling our nuclear arsenal. John McCain has become such a dishonorable hypocrite, that it’s difficult to remember that there was a time when he was regarded by some as a straight shooter who served the best interests of his country.

Not to be outdone, Texas Gov. Rick Perry, the reigning dean of the Fred Thompson School of presidential primary busts, said that freeing Bergdahl was an effort to distract public attention from the Veteran’s Administration scandal.

“Here’s the bigger concern for me, and I really would like for somebody to take a look at this and answer it — was this done to take the VA off the front page of the newspapers?” Perry said during an appearance on Fox News’ “Hannity.”

Unfortunately, Perry is delusional enough to think he has a shot at the White House in 2016. He spoke at the Texas GOP convention this week, making it clear that he was considering a run. According to the Dallas Morning News, Perry gave “a rabble-rousing speech about the future of American leadership, laying the groundwork for a potential second presidential run after leaving the Texas stage.”

I guess forgetting the name of entire federal departments to shut down, peddling in conspiracy theories, and suggesting we allow a POW to die in the hands of the Taliban is what Perry considers the leadership of tomorrow. Apparently, the governor’s memory hasn’t improved, or would have recalled how he humiliated himself during his 2012 flame out. I suppose he can soon join the other scarecrows in Iowa in wishing that he “only had a brain.”

Back to the Bergdahl smear campaign – South Carolina Sen. Lindsey Graham’s hyperbole sunk to new depths by claiming that Obama’s release of five prisoners from Guantanamo might be considered an impeachable offense.

These half-witted hypocrites act as if such a prisoner exchange is unprecedented. David Brooks, a conservative columnist with the New York Times, pointed out that Israel once traded 1,027 Palestinian prisoners to get back a single Israeli soldier. On another occasion, Israel swapped 1,150 prisoners for three of their soldiers. And, as we know, the threat of terrorism in Israel is substantially higher than it is in the United States.

No one wants to free these dangerous Taliban slugs. However, if we desire continued protection from such monsters, our service members need to know we have their backs and we will do everything in our power to ensure they return home safely.

Previous post:
Is Abortion Still Legal? Next Post:
To Hell With the Airlines — They Are to Blame for Spike in Air Rage
about the author: Wayne Besen