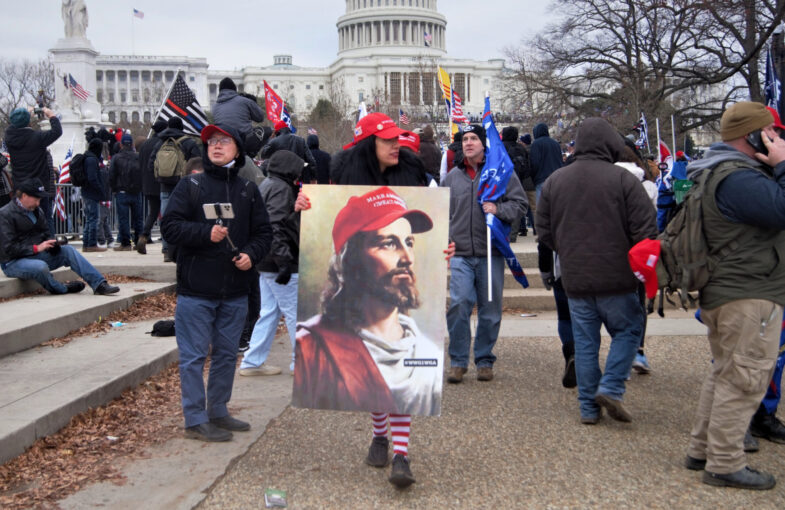 A Future of cruelty, conformity and darkness awaits unless we vote in record numbers

The first January 6 committee hearing was riveting. Glued to the television, I didn’t realize a tear had streamed down my face until it splashed on my shirt. As the video showed alarming clips of angry, fascist thugs forcing their way inside the United States Capitol and attacking police officers, I felt an unexpected rush of fury competing with melancholy. I tried to process my emotions during the break, but the precise language escaped me until it surfaced in the morning.

The extremists were smashing windows and traipsing through the ornate halls of the U.S. Capitol, but it felt as though they were breaking into my home. There was a curious intimacy, like they were trashing my living room, lounging on my bed or physically attacking my family. There was something guttural and personal with this ruthless assault on our Temple of Democracy.

The January 6th fanatics were threatening our civilization, sense of security, pursuit of happiness and general way of life. The armed insurrectionists were in Washington to send the rest of us a deadly serious message. They wanted us to know that none of us are safe from their barbarism. If they could so easily take over the People’s House, they could waltz into my home or yours too.

What our nation endured was a mutiny against the rational world of reason and a declaration of a new world order. It was a projection of force that unceremoniously announced, “We’re coming for you and there is nowhere to run or hide.”

Most frightening was how close these deranged zealots came to succeeding. As President Donald Trump watched the coup attempt on television – failing to activate the military to intervene – his mob traversed the halls of Capitol Hill. They bellowed “hang Mike Pence” while feverishly searching for the Vice President. The crowd hauntingly chanted “Naaannncccyy” as they hunted for House Speaker Nancy Pelosi. We can only wonder what the fate of our nation would be today had the frenzied throng found its prey.

In The Atlantic, Peter Wehner accurately summed up the gravity of this spectacle. “The sheer scale of Donald Trump’s depravity is unmatched in the history of the American presidency, and the Republican Party made it possible.”

By the way, did you take a close look and see the people invading our Capitol? I mean, did you really take a serious gander at these goons?

To glimpse the blank eyes, the ignorant expressions and the animated faces contorted with rage, one can only shudder to think what life in America would be under the yoke of these terrorists. The storming of Washington felt personal and invasive to me because this unruly crowd of crackpots was attempting to destroy everything I care about and everyone I love. Had Donald Trump’s coup succeeded there would be no future – only depressing days filled with fatalism and fear.

These would-be tyrants were not simply demonstrators exercising First Amendment rights. They were avowed soldiers in a violent movement that declared war on liberal democracy. Their short-term mission was to overthrow the United States government and replace it with an authoritarian dictator. The longer-term goal of these primitive Neanderthals was overturning the Enlightenment. This is a backward-looking cult that is adamantly opposed to democracy, LGBTQ equality, women’s rights, art and literature, religious pluralism, science and journalism. There is nothing left in the sick society they envision but cruelty, conformity and darkness.

What’s terrifying is that the insurrection is ongoing. Donald Trump’s MAGA network has labored to replace non-partisan election officials across the nation with loyalists who have the power to dispute elections with false allegations of fraud. Trump is also trying to elect radical lawmakers who won’t respect the will of the voters and favor Republican legislatures deciding election outcomes by choosing illegitimate slates of electors.

At the center of this perverse movement is FOX News, which has unequivocally sided with the terrorists and can only be described as “Coup TV”. This was made incontrovertibly clear when it was the only news network to not carry the January 6 committee live. Instead, it aired its white supremacist host, Tucker Carlson, delivering propaganda that downplayed Jan. 6. The Washington Post reports:

Carlson began by crowing about Fox’s decision to stand apart from its competitors.

“The whole thing is insulting. In fact, it’s deranged,” Carlson said. “And we’re not playing along. This is the only hour on an American news channel that will not be carrying their propaganda live. They are lying, and we’re not going to help them do it.”

At no point did Carlson present evidence to show how the committee, or its powerful witnesses, were lying. FOX also had no commercial breaks, lest some of its audience flip the channel and inadvertently stumble upon the facts presented in the hearing. Perhaps, they would have heard the emotional testimony of Capitol Police Officer Caroline Edwards, who fought the insurrectionists and said, “I was slipping in people’s blood. I was catching people as they fell…it was carnage. It was chaos”. Had FOX viewers changed the channel, they might have watched former Attorney General William Barr call Trump’s claim of election fraud “bullshit” and seen the former president’s daughter, Ivanka, throw her father under the bus by agreeing with Barr.

Although FOX’s old slogan was “Fair and Balanced”, it did backflips not to expose its sheep-like audience to facts that might upset the cable network’s narrative downplaying January 6. According to The Washington Post:

For much of the show, the hearing was shown on-screen as Carlson and his guests spoke over it. Often, the view was not of the committee members, witnesses or the video display at the front of the hearing room. Instead, it was often a shot of the audience. One NBC News producer went back after the fact and synced Carlson’s show with what was being shown in the hearing room. During footage showing rioters breaking into the Capitol, Fox switched to the camera showing the audience. When the hearing showed information that didn’t need sound, Fox more than once cut away from it.

In taking this approach, FOX definitively proved that it isn’t real news, nor is it mere entertainment posing as news. Their actions indelibly positioned FOX as the public relations firm for a movement hellbent on overthrowing the American experiment and ending democracy. After FOX’s treatment of the most important hearing of our generation, it is unconscionable for cable companies to continue offering “Coup TV” as part of general cable packages. FOX is a toxic sewer of disinformation and an assault on reality.  Cable companies should do their patriotic duty and offer FOX only as a premium channel, like they do for pornography.

Let’s hope that the Jan. 6 committee’s powerful presentation will shake Americans out of their midterm slumber and drive them to the polls in record numbers. While expensive gas and rising inflation are incredibly important issues, prices will eventually fall. If America falls to fascism, democracy may never again rise from the ashes. In this election, we are not just voting for which party oversees the nation, we are voting to ensure that we will have the right to vote in the future. The January 6 committee vividly showed what is at stake and we ignore their warning at our peril.

Previous post:
Republicans are more upset by Drag Queens than Guns in Schools – Interview with Scott Hamilton Next Post:
Florida’s Little Dictator, Ron DeSantis, is a Black Cloud Hanging Over the Sunshine State
about the author: Wayne Besen