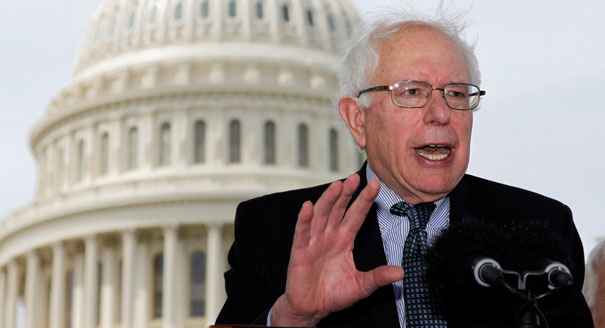 The Media Should Give Bernie Sanders a Fair Shot

Vermont Sen. Bernie Sanders is sticking his toe in the presidential waters. Unfortunately, the media doesn’t seem to be willing to give him a fair shake and consider his important ideas. Instead of judging Sanders on his merits, reporters are quick to inaccurately pigeonhole him as the left wing opposite of Tea Baggers.

He has virtually no chance of winning the nomination, but he does have a chance to shape the debate…With his fiery populist attacks on Wall Street and “the billionaire class,” he could become either a nettlesome thorn to Hillary Rodham Clinton or a convenient foil for her, if she runs.

Then the Times quotes pundit David Yepsen, who says:

“Sanders could become the vessel for the anger of the Democratic left.”

Sadly, they have reduced Sanders to an old angry dude that serves as an outlet for bitter, disillusioned hippies wearing tie-die shirts and sandals, while listening to “Give Peace a Chance.” (Not that there is anything wrong with that)

Progressives – please don’t let the lazy mainstream media tell you that your ideas or “far out” or impractical. Don’t let them stereotype you, or dismiss you, or offer you that stupid conservative grin and goofy cackle they use on TV when they casually schluff off smart progressive policies.

America has repeatedly tried conservative ideas and they have predictably failed. They have harmed this nation socially, economically, culturally, and spiritually. They have brought nothing but gain for the few, while providing pain for the many. Then, a wise leader like Bernie Sanders offers to correct these grave injustices, and all he gets is derision and dismissal for wanting to serve his country.

The Times article eventually points to what Bernie actually stands for:

He railed against big banks (“Break ’em up!), fretted over climate change and income inequality, and deplored the high cost of a college education (“Totally moronic.”). He embraced a single-payer health system (“Guess what everybody! Health care is a right!”), proposed strengthening labor unions and lamented a lack of voter participation (“All over this country people are throwing up their hands in despair.”).

But Mr. Sanders reserved his greatest ire for what he called “one extreme right-wing billionaire family,” the brothers Charles and David Koch. In his view, they are the root of what is wrong in American politics.

Why does the mainstream media consider it radical and left wing to suggest that the greedy banks that crashed this economy six years ago might be too large and shouldn’t be gambling with the public’s money?

Why is it considered extreme to suggest that students should be able to graduate college without being saddled with massive debt before they even hold their first job?

Why does the media think it’s bizarre to suggest that a person’s dignity and worth should not be tied to whether their life or death makes an health insurance company money?

Is Sanders wrong about the corrosive influence of outrageous amounts of money flooding into politics? Is he off base when he says that the Koch Brothers (and other oligarchs) have too much power over elections?

Bernie Sanders is simply telling the truth. It is an indictment of our political system that such honesty and courage is considered radical or abnormal.

The far right and their allies in the media want you to believe that Sanders is somehow weird and lefty – because they want you left out of the economy and want your family left behind, so they can continue exploiting you and profiting at your family’s expense.

Isn’t it bizarre how the media depicts the intelligent Sanders as an oddity, yet portrays ignoramuses like Sen. Marco Rubio or Texas Gov. Rick Perry as serious candidates? These Republicans don’t believe in climate change or evolution, yet, we are led to believe that they are worthy of consideration to run a modern nation.

While Hillary Clinton is the frontrunner and has earned that distinction, don’t underestimate Bernie Sanders. I spent three years in Vermont. It’s more libertarian than liberal. It is a rural state, and Sanders has won by connecting with farmers and small town folk. This will serve him well running in early primary or caucus states like Iowa, New Hampshire, and South Carolina.

A political consultant told the New York Times that Sanders would need to raise $50 million to be taken seriously. If Elizabeth Warren runs, Sanders won’t be able to raise enough dough. However, if Warren stays on the sidelines, Sanders might surprise people with grassroots fundraising and support from progressive and college voters.

It would be wonderful to have Sanders on the campaign trail to explain progressive issues in a way that people can easily understand. We need a champion who can spread the gospel across the country – so people understand that progressive causes are mainstream, not the radical agenda that the media often misrepresents.