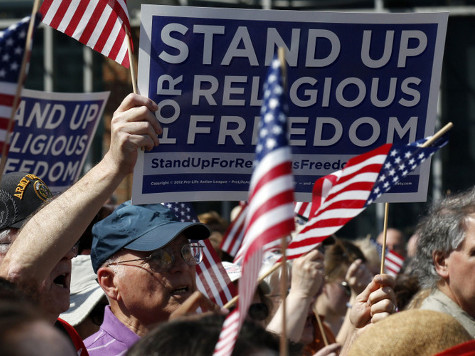 An increasing number of fundamentalist Christian business owners are now refusing to serve those they regard as sinners. They claim that doing business with such individuals violates their sincere religious beliefs. Although these business owners have opened their doors to the general public, they feel that it violates their conscience if they can’t run their operation like a private country club, picking and choosing who they work with.

They firmly believe their narrow worldview exempts them from obeying civil rights laws that were written to ban discrimination. This has led to a number of lawsuits by minorities who claim they were unjustly discriminated against. Here are a few examples:

• Freedom Ridge Farm, a bucolic resort in New Jersey, refused to allow a bar mitzvah on its property. They cited scripture and told the family that Jewish celebrations are not allowed because they deny Jesus Christ is the Lord and Savior.

•  In Washington State, Christian bakers that refused to sell a wedding cake to an interracial couple face hundreds of thousands of dollars in fines. The bakers justified their actions by saying the scripture makes it clear that the races were not meant to mix – with God carefully placing the races on different continents to avoid interaction.

• In Wisconsin, an elderly Christian florist could face hefty fines after she refused to provide wedding flowers to a Muslim couple.

• A Christian New Mexico baker is appealing a judge’s decision ordering him to start baking wedding cakes for mixed faith couples and to provide his staff with sensitivity training, after he refused to create a wedding cake for a couple, where the bride was a Hindu and the groom was a Muslim. The bakers said that the Bible made it clear that they should only serve those who are Saved Christians.

•  The US Supreme Court this year declined to hear the case of a Christian photographer from Illinois who claimed that refusing to shoot the commitment ceremony of a couple that had been “living in sin” and had given birth to a baby “out of wedlock,” was an expression not only of her constitutional right to religious freedom, it was protected by her First Amendment right to free speech. Illinois’ Supreme Court and the state’s Human Rights Commission have decreed that her refusal to shoot equaled unlawful discrimination.

Perhaps you agree that these fake Christians are hiding behind faith to rationalize their personal bigotry. You may feel a sense of revulsion at how these intolerant business owners exclude people who are different. You might be asking yourself: if these self-righteous zealots could use the bible to deny services to these folks, they could also find biblical justifications to exclude serving anyone and everyone.

Now, would you feel differently if the examples I cited pertained only to gay weddings? Would you suddenly think it was okay to discriminate and that turning gay people away from public venues was a matter of religious conscience? If the answer is “yes,” that is how you know you are a homophobic bigot.

(The examples mentioned above were all gay weddings. I changed the names, situations, and locations to make a point)

There seems to be a troubling double standard, where some think that exploiting faith to discriminate is immoral and should be illegal – unless it pertains to LGBT people. Then it miraculously becomes a matter of sincere religious beliefs.

Andrea Peyser, a columnist with the New York Post, fell for this religious ruse and farcically portrayed those persecuting gay couples as beleaguered Christian martyrs. In her ill-conceived column, Peyser said that “the law gives not a lick of respect to non-ordained people of faith” and “this kind of government bigotry should appeal to no one.”

However, Peyser fails to mention that her viewpoint creates a dangerous slippery slope that will tear apart the fabric of society. Once we allow conservative Christians to refuse service to gays – it will only be a matter of time before bigots of all stripes decide their beliefs trump the rights of minorities to be receive equal access to public accommodations.

Peyser conveniently did not address whether it would be okay for Christian Identity bakers, who believe God made white people superior, to not bake a cake for an African American wedding. Why not, if their convictions are genuine? Or, does Peyser think she qualified to decide which religious beliefs are sincere and valid, and which ones are fringe and must conform to anti-discrimination laws?

When a business is open to the public it is open to everyone. Once you violate this core principle, you are headed in an unfortunate direction. You simply cannot use prejudice to carve out a gay exception to the law – without returning America to a regrettable time when people used religious beliefs to decline serving minorities.

Previous post:
November 8, 2014 – Election Recap, Supreme Court and Healthcare, More Troops going to Iraq Next Post:
The Religious Freedom Cafe — Where a Side of Bigotry is Served with Your Burger
about the author: Wayne Besen

3 Responses to The Religious Freedom Farce