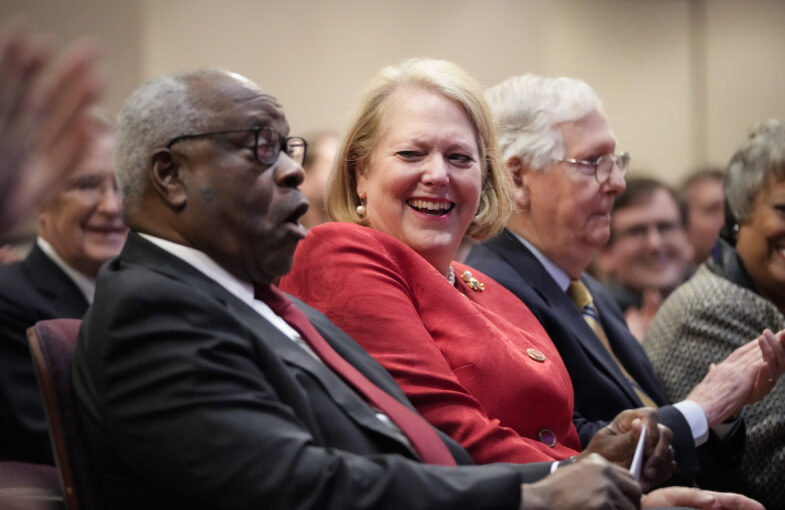 Legendary Supreme Court Justice Thurgood Marshall is finally being honored thirty-one years after his retirement. In 1991, President George H.W. Bush insulted the civil rights icon’s legacy by replacing him with a bitter iconoclastic right-wing ideologue, Clarance Thomas, whose sole purpose was to undermine the fairer and freer world Marshall created. When Judge Ketanji Brown Jackson is confirmed, Marshall will finally have his rightful heir. Meanwhile, the recent untoward revelations about the underwhelming and underachieving Thomas, highlights that he is more undeserving than ever of filling the gigantic shoes of Justice Marshall.

The Senate confirmation circus has reminded us that the GOP is a white grievance party with no interest in responsible governance. In their Inquisition, thinly disguised as a legitimate hearing, they pathetically pantomimed high mindedness, while slithering down the lowest muddy road imaginable. With barely concealed winks and nods to Q-Anon conspiracy theorists, aka the GOP base, they portrayed Jackson, without a shard of evidence, as soft on child porn. One almost wishes that actor Will Smith was Jackson’s husband, so he could walk up to the table and publicly spank the insidious liars and loons spinning these outlandish charges.

Judge Jackson was remarkably eloquent in the face of farce. She remained calm and dignified, while forced to endure a grueling marathon of mindless inanity, designed to get Republican presidential wannabes on Sean Hannity. We keep hearing from the media how smart insurrectionist Senators Ted Cruz, Tom Cotton and Josh Hawley allegedly are. But is there any evidence of even a wisp of wisdom? How could such vaunted Ivy League minds consistently ask such bush league questions in a hearing to decide on the future of the Supreme Court

It seems they’ve dumbed down their rhetoric for so long to appeal to their radical base, that the idiocy is no longer a routine, but a ridiculous reality in which these intellectual lightweights permanently occupy. The word that comes to mind when I watch these Republicans is “immaturity”. I’d call it a frat boy mentality, but that falsely implies their behavior is at a college level. They act more like socially stunted bullies and class clowns leading a mediocre middle school debate team.

The entire sideshow was a parade of partisan pugnacity that collapsed into a silly charade of audacity. Republicans trolled America as they feigned concern about the integrity of the judicial system. But their daffy questions belied the sad reality that they’d put Daffy Duck on the Supreme Court if he’d carry their ideological water bucket and help enact their unpopular right wing policy preferences.

These haughty Republicans acted so concerned about morality, but this the party that railroaded through morally suspect justices Thomas and “Beer Bong” Brett Kavanaugh to lifetime appointments. Neil Gorsuch and Amy Coney Barrett are arguably illegitimate, having only secured their appointments after Mitch McConnell engineered a right-wing coup of the Supreme Court. Neither one of them belong in the marble halls, and if Democrats ever get the numbers to remove Barrett and Gorsuch, they should be impeached without reservation. Why reward Moscow Mitch McConnell for stealing two Supreme Court seats, that are fundamentally changing the legal direction of America?

Meanwhile, Clearance Thomas sits on the Supreme Court deciding cases about the Jan. 6 insurrection, while his wife, Virginia “Ginni” Thomas is a key coup plotter. In 29 shocking text messages between her and former Trump White House chief of staff Mark Meadows, Ginni begged him to overthrow the legitimately elected president and reinstall Trump. Judge Thomas unethically exploited his position in a failed attempt to deny the Jan. 6 congressional commission key text messages regarding the insurrection. Was he using his power to shield his wife.

Ginni’s text to Meadows asking to “release the Kraken and save us from the left taking America down”, proves that she is a coup-plotting crackpot. While Ginni had long been a well-known activist, her texts moved her from a right-wing firebrand to an active political arsonist. What did Judge Thomas know about her nefarious activities and how did that affect his actions on the bench?

There needs to be a Congressional investigation on why Thomas, at a bare minimum, didn’t recuse himself from cases dealing with Jan 6. If he has even a minor connection to his wife’s unpatriotic activities, he should be impeached. Meanwhile, the American Bar Association ought to speak out against Thomas’ lack of ethics and consider recommending disbarment. He is a stain to his office and disgrace to the legal profession. The ABA has an obligation to set an example of how a judge ought not behave, and Thomas is the poster boy for failure to live up to one’s oath.

The competence and class displayed by Judge Jackson is in stark contrast to the Republican crisis of character. For America to prosper, we need more public servants like her, and less power-hungry politicians devoid of conscious and conviction, like Clearance Thomas and Sens. Hawley, Cotton and Cruz. But hey, why do what’s right for the country, when behaving dishonorably gets one on Fox News and right wing talk radio?

Previous post:
Hey gun nuts and gangs, why don’t you donate arms to Ukraine? Next Post:
The GOP has Transformed America into a Soul-Sick Society
about the author: Wayne Besen