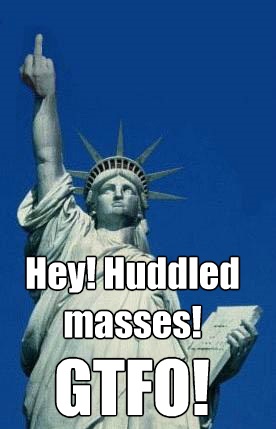 President Barack Obama has urged Congress to provide $3.7 billion dollars to deal with immigration, calling it “an urgent humanitarian crisis.” This money might actually be available because we aren’t spending all of it on Republican pet projects, such as building schools and roads in Fallujah.

One would think the Republicans would be happy. After all, Obama’s plan looks very similar to House Speaker John Boehner’s plan. But since Obama is for it – they have to come out against it. If Obama supported adopting cute puppies, the GOP would support aggressive dogcatchers who put pooches to sleep.

The GOP wants to build a giant fence at the border. I’m not surprised. If they have as much success blocking immigrants as they do blocking legislation in Washington, their plan will be a smashing success.

Unfortunately, this serious issue took a bizarre turn. President Barack Obama was in Texas for two days and Republicans demanded that he visit the border. What do Republicans think he’s going to do down there? Is he going to drink a Corona, hit a piñata, and sing La Cucaracha? Will he physically tackle a 6-year-old Guatemalan girl who’s crossing the border?

This is why people hate Washington. It is theater of the absurd. Republican’s want a photo-op of Obama they can exploit, with the President standing idly at the border, surrounded by immigrants doing nothing, so they can contrast his alleged inaction with those rowdy Tea Baggers who stopped busses full of immigrants in Murrieta, California. This is about posturing and politics, not about sound public policy.

And, can you believe Gov. Rick Perry? He had the unmitigated gall to initially reject a public meeting with President Barack Obama. Could Gov. Perry be any more disrespectful? He doesn’t have to love Obama. We aren’t asking Perry to go to the prom with the president. What about respect for the office?

Even after being rebuffed by Perry, President Obama was a gentleman, and agreed to meet Perry privately and attend a round table discussion.

Perry is a lightweight, with the memory of a goldfish, who couldn’t even emerge from one the weakest Republican presidential primaries ever. Yet, he treated a twice-elected sitting president like dirt. First, demanding that they meet privately – like Obama is a crystal meth dealer, and they must conduct secret business in the shadows.

If I were the President, I would have told this Perry – who has threatened secession, by the way – to get lost. The hapless Texas governor has been downright conspiratorial, putting his own hopeless presidential ambitions above the good of the nation.

It is a mark of true leadership and professionalism that Obama gave Perry the time of day and finally met with him. I certainly wouldn’t have. I never would have gotten within 100 miles of this toxic blowhard with delusions of grandeur.

It is also astounding how it is considered the kiss of death for conservative Republicans to be photographed with Barack Obama. For example, when Chris Christie embraced Obama after Hurricane Sandy, he was excoriated and not invited to speak at CPAC. Now Perry tried to run away.

What is interesting is that Rick Perry is desperately shedding his image as a gaffe-prone yahoo. He has nixed his ostentatious boots and now wears fancy eyeglasses that would look fashionable in DuPont Circle. I guess he’s trying to erase his “oops” moment, when he could not remember the third federal department he wanted to eliminate during a debate.

I could put nice eyeglasses on Doinkers, my French bulldog. But, it’s not going to help her do calculus. A wardrobe change isn’t going to suddenly make Rick Perry a wonky presidential contender. This silly makeover is nothing more than a failed acting job. With all of the unseemly Republican Ronald Reagan worshipping, you would think they would know what a real actor looks like.

Back to immigration — the Republicans are going to pay a heavy price for showing their true colors. Their message to the growing Hispanic electorate is: “We don’t like you.”

I still can’t get over that grotesque scene in Murrieta, California. It was downright cruel what these self-righteous Tea Baggers did to innocent mothers and children looking for better lives. Imagine being a child in a foreign land – and having an angry band of nativists waving flags and blocking the road – while demanding deportation.

Is this the image we want of America? It’s not like we are land of immigrants or anything. If these Tea Baggers had their way, we’d change Statue of Liberty to the Statue of Bigotry – and she’d have her middle finger out, telling everyone to go home.

One Response to The Tea Bagger’s Statue of Bigotry: Go Home