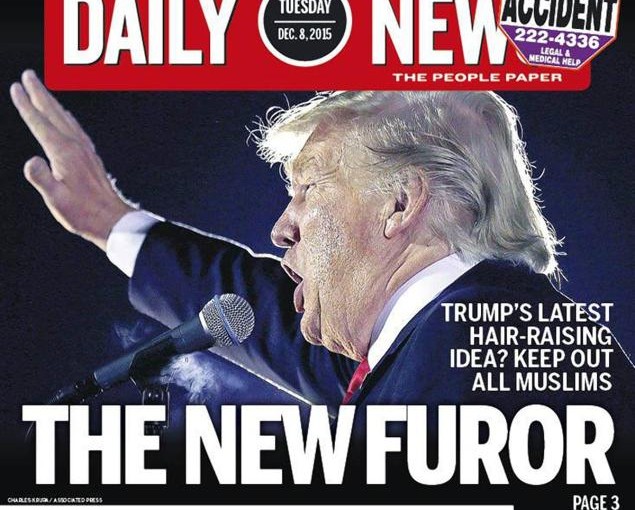 Trump is not the Embarrassment, but Embodiment of GOP

The Republican Party is sharpening its knives against Donald Trump. They are apoplectic because he has hatched his latest bigoted scheme. This time he wants to expand his proposed surveillance of mosques and database of Muslims to flat out blocking all Muslims from entering the United States until our leaders can “figure out what is going on.”

Republicans who are suddenly protesting Trump’s plan are laughable. As I said recently, the Donald Trump story is greater than Donald Trump. It’s about how one of our two major political parties has become a brain-dead, war-mongering, belligerent, morally vacuous, shell of a party.

It is about how the GOP has built its rabid base though controversial wedge issues, dog whistles, and the outright spewing of verbal raw sewage. Donald Trump is not the embarrassment of the Republican Party, he is the embodiment of it. He is the distilled version of a candidate built on a party that thrives by promoting discrimination and attacking diversity.

The problem is that no one really cares what party elites like the irrelevant Graham and overrated Ryan thinks about Trump. The voice that matters to the base is Ann Coulter’s, and she responded to Trump’s call to bar Muslims by Tweeting, “GO TRUMP GO!”

Yes, on he keeps going, rising in the polls, fueled by the fanaticism of sycophants at Trump rallies, as well as the reticence of his major rivals who are afraid of offending Trump’s supporters, which they hope to co-opt in the event Trump’s campaign implodes. This particularly applies to Ted Cruz, who portrays himself as a tough talking straight shooter, but is so constrained by “conservative correctness” that all he could say in response to Trump’s latest comments is that they are “not [his] policy.”

Trump’s comments have created a hostile atmosphere where hate crimes can flower. However, they have not occurred in a vacuum, with the GOP regularly tolerating intolerance. In fact, they wear it as a badge of honor, often presenting conservatives as bulwarks against liberal political correctness. Unfortunately, the bigotry is happening on a daily basis and having real world consequences.

On Monday, a severed pig’s head was left on a Philadelphia mosque’s doorsteps. On Tuesday, an early morning fire heavily damaged Juba Coffee House, a Somali restaurant in Grand Forks, North Dakota. It is being investigated as a hate crime because the previous week, someone painted graffiti of a Nazi SS sign on the exterior wall of the building, above the painted words, “go home.”

On Monday, a Republican Las Vegas Assemblywoman Michele Fiore who had previously sent out a gun-wielding family Christmas card, told listeners of her KWDN radio show of her Syrian refugee plan: She will personally “fly to Paris” and “shoot ’em in the head” herself.

Last Friday, Ben Carson said at an Iowa veterans town hall event that he wanted to ban transgender service members from the military, and that the army should revert to the policies of “Don’t Ask Don’t Tell.”

“I do not appreciate using our military as a laboratory for social experimentation,” Carson said in front of Concerned Veterans for America in Waterloo. “The last thing that we need to be doing is saying what would it be like if we introduced several transgender people into this platoon. Give me a break. Deal with the transgender thing somewhere else.”

Last week, the nation mourned after a Christian terrorist stormed a Planned Parenthood facility near Colorado Springs. When a reporter informed Cruz that the suspect is alleged to have mentioned “baby parts”, the Texas senator replied, “Well, it’s also been reported that he was…a woman and transgendered leftist activist, if that’s what he is.”

The modern GOP has become a vicious party of political predators who often spew vile ideas and violent views. That the so-called mainstream or establishment Republicans have allowed this to occur makes them enablers. The truth is, Trump is not an outsider or outlier, but the bigoted bed they have made and now lie in.

One Response to Trump is not the Embarrassment, but Embodiment of GOP