Donald Trump was elected by duping millions of Americans into believing he was a populist who shared their concerns.

He promised to drain the swamp. But Washington looks more like the Everglades than ever, with the avaricious alligators having more money and influence than before Trump’s arrival.

The president’s outrageous new $4.1 trillion dollar budget for 2018 exposes Trump as a two-faced charlatan that does the bidding for Cadillac Conservatives, while sabotaging the safety net for regular people. His reverse Robin Hood budget would leave millions in desperation and destitution – and millions more may die.

• Trump’s budget would cut food stamps by $192 million over the next decade.

• $800 million dollars would be carved out of Medicaid – which is healthcare for the poor. This would have a disproportionate impact on children, with 40% of all youths under age 6 relying on the Medicaid

• Trump’s budget drastically cuts funding for international AIDS relief programs. amFAR projects these cuts could kill one million people and orphan more than 300,000 children. This from a party that claims to be pro-life and care about family values. If you ain’t a fetus, forget about it. 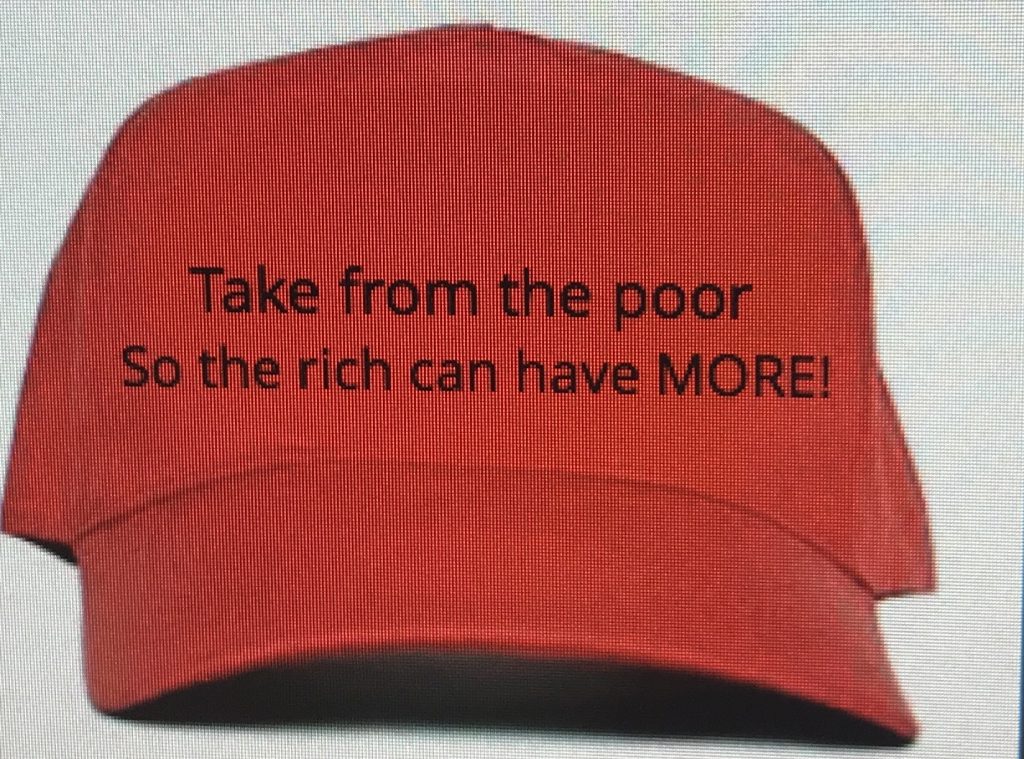 Some of the cuts were so draconian, they even alarmed Congressman Mark Meadows (R-NC), who leads the teabagger Freedom Caucus.

“Meals on Wheels, even for some of us who are considered fiscal hawks, may be a bridge too far.”

Meanwhile, the military received a 10-percent increase in funding, even though United States already spends more on defense than the next eight countries combined. Trump certainly has made America great for defense contractors and the Military Industrial Complex.

Trump also includes $1.6 billion for his border wall – which is odd, considering Mexico is supposed to pay for the wall.

Trump voters, you didn’t really think that was going to happen, did you?

In Trump’s twisted fantasy world of fuzzy math, he’s going to give $2 trillion dollars in tax cuts to millionaires and billionaires. He actually thinks this will magically unleash incredible economic growth, which will in turn lead to increased tax revenues of $2 trillion dollars to offset his tax cuts for the wealthy.

This is called “trickle down” Reaganomics, or “voodoo economics.” Indeed, President Reagan tried this crackpot economic philosophy. In 1982, he cut the top income tax rate from 70 percent to 28 percent and the corporate rate from 48 percent to 34 percent. This led to $1.4 trillion in deficits, nearly doubling the debt.

Kansas Republican Gov. Sam Brownback also experimented with trickle down – and it didn’t trickle down. The state is a complete mess and Brownback is the least popular governor in America.

Trump’s rosy budget projections make the assumption that America is going to go 206 months without a recession, which has never happened.

Conservative economics are an abject failure, and Trump is offering the same old, tired Republican lies that have devastated our economy and ballooned deficits for decades.

While Trump appealed to the hardhats during his campaign, only the hardheaded still claim Trump kept his promises to help the middle and working classes.

Trump lured and bamboozled voters with his big red “Make America Great Again” hat, but his budget would lead to a cruel and depraved hat in hand society that strips people of their basic human dignity.

If Trump hasn’t been impeached by 2020, his reelection campaign slogan should be: “Take from the poor, so the rich can have more.”