The Oklahoma-based Green Family, owners of the $3 billion company Hobby Lobby, is, once again, up to no good.

Fresh off their Supreme Court victory – where corporations are now people with religious beliefs that can deny birth control to employees – this conservative clan now wants to open a Bible Museum in Washington, DC.

What do you want to bet that the Hobby Lobby Jesus represented by this museum will be a suburban, right wing, gun loving, Republican voting, homophobic imposter – that has nothing in common with the real Jesus Christ, who loved the poor and hung out with outcasts?

No matter how much money Steve Green funnels into this ill-conceived project; no matter how cool, high-tech, or 3D the holy amusements are – it’s still not legitimate history. It will be no more than Biblical Broadway or Deity Disney – an entertaining infomercial for one man’s skewed and biased reading of an ancient book.

Green is going to drop some serious coin on this project. He bought a 400,000-square-foot space in 2012 for $50 million. When you throw in 40,000 planned artifacts, the real estate and the cost of renovations, the museum is an $800 million vanity boondoggle.

The New York Times said the project would sit in the shadow of some of the capital’s most prominent institutions, including the Smithsonian’s National Air and Space Museum. The cunning Green family’s actual objective is to exploit the famed backdrop of the National Mall to give legitimacy to a wacky theocratic view of America.

Steve Green (pictured) doesn’t believe in separation of church and state and thinks this is a “Christian nation.” This museum, with all the trappings of official Washington, will make it appear to naïve museum guests that America was once Jesus Land. That is, of course, until mean 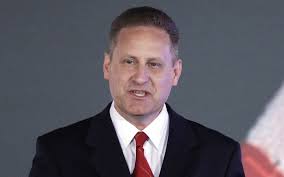 If you think I’m kidding, this is what Green said in a speech last year in New York City:

“This nation is in danger because of its ignorance of what God has taught. There are lessons from the past that we can learn from, the dangers of ignorance of this book. We need to know it. If we don’t know it, our future is going to be very scary.”

What I think is scary is Steve Green and his un-American vision. The museum project is part of a larger effort to indoctrinate schoolchildren. He is even ginning up a curriculum to “reintroduce this book to this nation.”

The last thing an already polarized America needs is a museum that bastardizes the Bible to promote a right wing fundie Jesus that bashes minorities and falsely portrays itself as legitimate history.

The proposal still needs final approval from the city because the building, which is considered an important example of Renaissance Revival architecture, is being designated as a historic landmark.

Leaders in Washington should soundly reject this theme park for extremism disguised as a legitimate museum. A Green-funded museum would likely proselytize and promote one radical strain of Christianity, at the exclusion of more tolerant and mainstream versions of the faith. National Mall museums should be about genuine scholarship, not divisive, sectarian efforts to evangelize.

I’m not saying that Green should not be able to build his gargantuan monument to medieval thinking. This is America and he has a right to free speech. What I am saying, however, is that the National Mall is obviously a grossly inappropriate location for such a doctrinaire endeavor.

The ignoble goal of this sham history project is to opportunistically create a Trojan Horse for Green’s right wing activist agenda. It is folly to degrade the National Mall experience by including a scheme dedicated to disinformation. Museums in this hallowed and venerable location should be about education, not indoctrination. This so-called museum would make a mockery of surrounding exhibits, which are based on research, history, and scholarship.

Last week, my organization, Truth Wins Out, released a new report titled, “Hobby Lobby Case Linked to Secret National Prayer Breakfast Group,” that highlighted the Green family’s strong link to leading right wing ideologues. Unlike museums which are designed to enhance our understanding of this nation, the Greens are hardcore ideologues committed to undermining our understanding of America – and replacing it with a fabricated alternative version of history.

Let them build this fundamentalist farce anywhere else in Washington. But it’s wrong to allow these zealots to exploit the majesty of the National Mall to undermine democracy and peddle the fiction of a Christian nation.