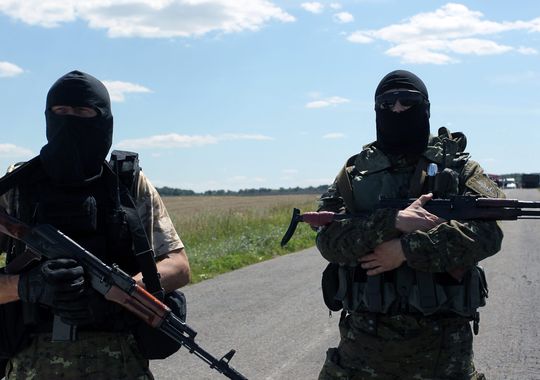 In Ukraine Crisis, Republicans Need to Put Patriotism Above Partisanship

Malaysian flight 17 has been shot down by what appears to be pro-Russian extremists who are trying to destabilize Ukraine. Several key AIDS researchers have died.

Not only was this tragedy a loss for these victims and their families, but also it was a loss for humanity. What if one of these scientists was on the cusp of creating a cure that could save millions of people? Or a new drug that improved the lives of people already living with HIV? What happened was horrific and we may never know the true loss to the human race the death of these scientists represents.

The juxtaposition of these inspiring geniuses to the lowlife Putin cronies who likely fired the missile is telling. One group was highly educated with the goal of furthering our species, and they plummeted into a part of the world that has become a gutter of ignorance and aggression. Russian President Vladimir Putin represents death, destruction, and dragging the world backward. The people murdered on flight 17 represented the best of humanity, propelling the planet forward. The scientists killed on the flight were modern minds. The violent thugs doing Putin’s bidding in Ukraine are medieval. These apparatchiks are about brute force, while these wonderful scientists were about conquering the forces of nature to make life less brutal. The comparison of what the West has to offer civilization and what Putinism has to offer could not be starker.

Malaysian flight 17 is a metaphor for the current clash of civilizations. Europe and the US are committed to building, while Putin’s only talent is to destroy. Our societies are about flexing our intellectual muscle – while Putinism is about flexing biceps and kicking sand in the face of weaker beachgoers.

There is no greater force of dissention in the world that Russia. It is a weird mix of religious nationalism run by an autocrat and backed by plutocrats. Kind of what the Republican Party would like to do in America. They don’t produce anything meaningful. All Russia does is extract natural resources and profit from the energy sector. Regimes like this are dangerous because they must distract their people from realty. And they do this in two ways. The first is targeting vulnerable minorities as scapegoats. This explains Russia’s vicious crackdown on gay people and violent reaction to foreigners.

The second means of distraction is military conquest. The idea is to whip the population into patriotic fervor, and portray critics as enemies of the state. We saw some of this right here in the US after 9-11 in the Bush/Cheney rush to invade Iraq. Russia is now in this pathological cycle, with the invasion and annexation of Crimea bringing Putin’s approval rating to close to 80%. But, then again, maybe that’s exaggerated. In vicious police states, people are less inclined to tell the truth to pollsters.

Barack Obama has done a masterful job handling the crisis in Ukraine. His latest round of targeted sanctions tightens the economic noose around the neck of Vladimir Putin. Obama has been very smart about rolling out sanctions in stages. That gives him room to increase sanctions, and serves as a deterrent to Putin. It also creates an incentive for the Russian “Godfather” to behave more prudently.

Of course, Republicans want — well, I’m not sure what they desire. They are harshly criticizing Obama for not being tougher. These conservatives claim they don’t want war with Russia, but they are playing a dangerous game. Putin is a man who adds nothing to the world. His nation doesn’t invent, it doesn’t produce, and it’s entirely dispensable. The Russian dictator gets all of his authority by appearing strong. If the United States went out of its way to deliberately provoke Putin, his very legitimacy would be on the line and domestic politics would force him to respond.

When we are talking about Putin – we must remember that this is a buffoon who fights bears, tackles tigers, and rides shirtless on horseback to assert his alpha male status. Yet, Republicans think it’s a swell idea to question the manhood of this insecure egomaniac. Are Republicans trying to start World War III?

They were very macho and cavalier when we went into Iraq. Yet, they seemed to have learned nothing from the experience. They are no more humble today than they were when we entered the Iraqi quagmire. Except, this isn’t Iraq, this is Russia – and they can shoot back. Their weapons can reach the homeland. They can destroy our cities. They can kill our families. They can end civilization.

Thank God we have an adult in the White House who understands the situation. Who understands that choices we make have ramifications. If you listen to the GOP chicken hawks, they keep pushing for Obama to be Clint Eastwood, and tell Uncle Pooty –“Go ahead, make my day.”

But, what if Uncle Pooty says “yes”? What if he says, okay, I’ll make your day – and sinks an American warship or shoots down an F-16? What are these chicken hawks going to do then? What are they going to do if he calls their bluff?

Isn’t that a strong argument for not bluffing?

Republicans keep insisting that we aren’t going to war with Russia. I’m not so sure. Vladimir Putin is a former KGB guy with a huge ego and a hunger to restore the prestige that was lost with the fall of the Soviet Union. He is a tyrant and a murderer who has harassed, assassinated, and jailed his political opponents. The fact that he has had a religious awakening with a right wing church is even more disconcerting. Like George W. Bush, he might believe he is called to greatness and his faith makes him a man of destiny.

What if Putin invades Eastern Ukraine? What if he then takes Kiev? What if these actions embolden him and he goes for Estonia, Latvia, and Lithuania? Or Poland? World history is filled with examples of bloodthirsty megalomaniacs who tried to conquer the world. They wanted to be in the history books. War is a way to make history and be remembered. Napoleon lost, but we still talk about him. Hitler lost, but we still we remember him. Anyone who has seen Putin hunting shirtless, combined with his hawkish instincts should be gravely concerned.

That’s why these bloviating conservatives lawmakers and blowhard pundits need to stop being Republicans first and start being Americans first. Their audacious, politically motivated attacks on the president are unseemly – and undermine national security. We have a foreign crises, an international tragedy with Malaysian Flight 17, and all the Republican can do is get in line to attack the president. They have no respect for the office and even less respect for nation’s foreign policy.

What happened to the Republican Party? Its only policy is to mindlessly attack Obama over anything and everything – all the time. It doesn’t matter what it is. Everything is politics.

We need to come together as a country. During an international crisis we need patriotism, not partisanship. Is the GOP even capable of that anymore? I don’t know. There is certainly no evidence that they can put aside their deranged hatred and hysteria over Obama to do what’s best for America.