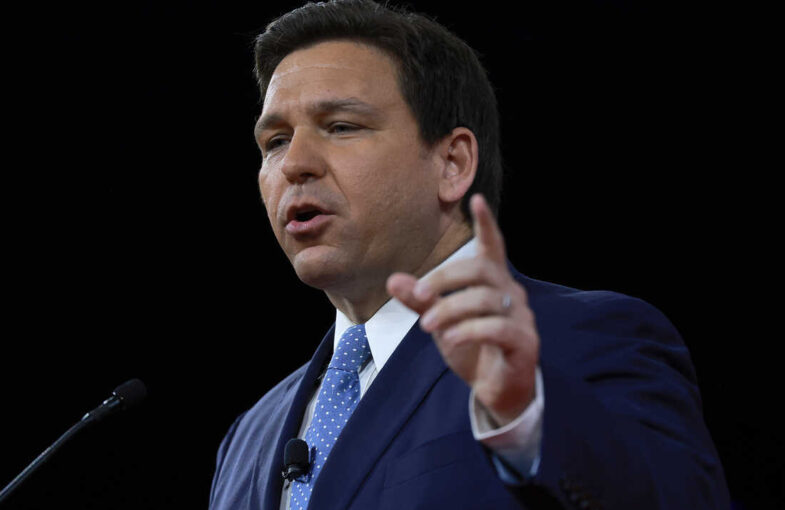 LGBTQ isn’t a lifestyle, but joining a primitive church that perpetuates prejudice certainly is

Florida’s Republican Gov. Ron DeSantis should henceforth be known as Ron “Little Dic” DeSantis, because he acts like a mini dictator. He believes that his path to the White House is leveraging the state’s purse strings to assert control over his perceived enemies. If he deems a corporation too “woke”, they get a nasty wakeup call, with the governor demanding they repent or essentially pay higher rent to operate in Florida.

In the same way that former President Donald Trump corruptly operated as if he owned the federal government, “Little Dic” believes Florida is his fiefdom. To control business leaders, he’s withholding taxpayer’s money to muzzle free speech. If a company doesn’t bend to his political will, or simply holds a dissenting opinion, it is swiftly punished.

Meanwhile, his right-wing corporate allies can say whatever they want with no fear of backlash. And, for all his chest thumping, gun humping and faux bravado, “Little Dic” was conspicuously silent when neo-Nazis recently waved Hitler flags in Orlando. Apparently, Mein Kampf if off-limits for criticism, but Mickey Mouse is fair game.

DeSantis’ corporate crusade kicked-off with a blistering attack on Disney. He was angry because the company tepidly spoke out against Florida’s tyrannical “Don’t Say Gay” law, which has already chilled support for LGBTQ students. In one instance, a high school class president, Zander Moricz, was forced to cleverly get around talking about his experience as a gay student during his graduation speech, by substituting his “curly hair” for his sexual orientation. Where did he graduate from, North Korea High? Republicans love to talk about “freedom”, but this sounds more like textbook fascism.

Back to Disney – the company mildly expressed its disagreement with Florida’s authoritarian law. DeSantis swiftly retaliated, along with his legislative allies in Tallahassee, by eliminating a multi-million-dollar benefit that allowed Disney to largely govern its own affairs on the amusement park’s gigantic property. In other words, DeSantis orchestrated a state takeover of functions related to private industry – which is very similar to communism, which Republicans swear they adamantly oppose.

The GOP base swooned over his power-play, which encouraged DeSantis to search for new targets to bully. “Little Dic” was at his smallest, picking a fight with the Special Olympics. No, this isn’t fake news or me attempting to smear DeSantis. He actually threatened to fine the Special Olympics $27.5 million for requiring 5,500 participants at the USA Games in Orlando in June to be vaccinated against COVID. USA Today columnist Mike Freeman pointed out why this was particularly egregious:

The CDC last year updated its guidelines to include people with Down Syndrome at increased risk for severe COVID disease. By requiring that Special Olympians get vaccinated, you lower the risk of them catching COVID. This is highly elementary stuff.

Of course, “pro-life” governors like “Little Dic” have a fetus fetish and have little empathy for those already born. After putting Special Olympians at risk for illness and death, he sought revenge against the Tampa Bay Rays baseball team. Following the mass shooting in Uvalde, TX that killed 19 schoolchildren, the Rays pledged $50,000 to a gun safety reform group and Tweeted:

For the fatal infraction of supporting non-fetal life, DeSantis lurched off his throne to block state money for a new Tampa Bay Rays training facility. He did this only days before the six-year anniversary of the Pulse Nightclub massacre in Orlando. Merging “Little Dic’s” two favorite hobbies, whipping gays and worshipping guns, the Pulse shooter murdered 49 people and injured 53.

(Although, you’re forgiven if you don’t recall either Uvalde or Pulse, given that since the Texas incident there have already been a dozen mass shootings. At this rate, one would need the memory of a Jeopardy gameshow champion to recall the full catalogue of carnage.)

Of course, “Little Dic” isn’t operating in a vacuum. He’s merely the latest circus performer providing the GOP base the sinister show that it so desperately craves. Case in point, five baseball players on the Tampa Bay Rays are refusing to wear a rainbow Gay Pride logo on their uniforms during the team’s Pride Night celebration. Pitcher Jason Adam explained his decision.

The reason is “faith-based”, he said. “So, it’s a hard decision. Because ultimately, we all said what we want is them to know that all are welcome and loved here. But when we put it on our bodies, I think a lot of guys decided that it’s just a lifestyle that maybe — not that they look down on anybody or think differently — it’s just that maybe we don’t want to encourage it if we believe in Jesus, who’s encouraged us to live a lifestyle that would abstain from that behavior, just like (Jesus) encourages me as a heterosexual male to abstain from sex outside of the confines of marriage. It’s no different.”

It’s my view that these baseball players should have the right to decide whether to wear the rainbow logo. It would be counterproductive to punish them, and they would surely go on FOX News playing the role of cancel culture martyrs. However, Adam and his Christian cohorts should be held accountable and criticized for spreading misinformation and intolerance.

How can they say “all are welcome and loved” if they reject efforts of the LGBTQ community to be treated equally and fairly under the law? How do they expect a 15-year old gay fan, who looks up to them as role models, to feel after learning that their idols are homophobic ideologues?

Furthermore, being LGBTQ isn’t a lifestyle – it’s a life. People don’t choose their sexual orientation. Christian organizations have tried to prove that people could “pray away the gay”, but those miserable experiments ended in abject failure with a heartbreaking trail of ruined lives.

Adam’s thoughtless suggestion that LGBTQ people lead celibate lives is equally cruel. While he and his Christian buddies get to experience the joy and wonder of sex and love with their wives (and often the women these good Christians cheat with), he demands that LGBTQ people deny themselves the most basic of human needs to endure miserable, sexually frustrated, lonely lives of desperation and deprivation. As a side note, gay marriage is legal, so does Adam support sex during gay honeymoons?

You know what’s a chosen lifestyle? Joining a primitive church that bashes gays, controls women’s bodies and bestows guns to teenagers who may engage in mass shootings. There are so many peaceful, loving, inclusive houses of worship that these five baseball players could have joined. But, no, they freely chose to attend backward hate houses that specialize in division and discrimination. The same way that millions of Floridians could choose to support decent politicians with integrity, but instead pull the lever for leaders who traffic in ignorance and authoritarianism.

“Little Dic”, as well as the five anti-LGBTQ baseball players, have no excuse for their words and actions. There is one reason that they don’t support Pride, and it is because they believe in prejudice. They represent a dark cloud in the Sunshine State that threatens Florida’s future.

Listen to War of the Words Podcast on Spotify, Apple or Anchor.

On today’s War of the Words, Wayne interviews Heidi Beirich, the co-founder of the Global Project Against Hate and Extremism. They will discuss the recent rise of white supremacist hate groups and the rapid growth of political fascism.

Previous post:
The January 6th Committee Highlighted the Hell America Faces if Democracy is Lost Next Post:
Florida’s New Fascism and the Rise of the Global Hate Industrial Complex – Interview with Heidi Beirich
about the author: Wayne Besen