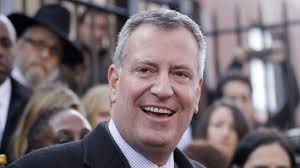 The reckless and irresponsible attacks on Mayor Bill de Blasio are disgraceful. Former governor George Pataki said that Mayor de Blasio and Attorney General Eric Holder were partially responsible for the double murder of police in Brooklyn because of their “divisive anti-cop” rhetoric.

Rudy Giuliani, a clown whose entire post-911 career consists of exploiting 9-11, pathetically capitalized off this tragedy. Giuliani opportunistically blamed protesters and even Barack Obama for rhetoric that led to the double police homicide. Giuliani is a bald-faced liar. The protests in New York City were largely peaceful. More than 25,000 people marched through the city and there were very few arrests or reports of looting.

Sometimes it appears as if Giuliani has lost touch with reality. His statements are increasingly incendiary and bizarre. It’s almost as if we are watching a diseased mind deteriorate in front of our eyes. Giuliani seems to be falling off the deep end in real time.

The most offensive and outrageous comments came from police union leader Patrick Lynch who said Mayor de Blasio had blood on his hands. Lynch has no interest in creating harmony in New York City. He is little more than a narcissistic, irresponsible, flame-throwing stage horse that is only interested in capitalizing off this tragedy.

Several white NYPD officers also turned their backs on the mayor while he spoke at the funeral for one of the officers. They should be summarily fired for insubordination. And, an anonymous group flew a banner from an airplane over New York City that read: “De Blasio, Our Backs Have Turned To You.”

Instead of bringing the city together, these buffoons cynically employ divisive rhetoric to tear at the fabric of New York. In lieu of mourning and acting responsibly, they exploited the tragic death of two police officers for political gain. Their behavior was profoundly immoral and grotesque. As far as I’m concerned, Patrick Lynch ought to resign from the police union. He has brought shame and dishonor to NYPD and is an embarrassment to the city.

The provocative rhetoric is a naked attempt to smear protesters and the mayor as anti-police. This criticism is contemptuous, it’s hyper-political, and has no basis on reality. It’s a cynical public relations campaign, being propagated by right wing politicians and the fact-free media, such as FOX, that promotes them.

Let’s examine for a moment why these belligerents are so angry. Following the deaths of Michael Brown in Ferguson and Eric Garner in Staten Island, a critically important national conversation took shape regarding race and police tactics.

Mayor de Blasio was asked about this topic and he told the truth: He said that if his biracial son, Dante was stopped by the police, he should “take special care” not to agitate them. This is the same conversation millions of minority parents have had with their sons.

For this sincere moment of honesty – extremists have pilloried de Blasio as anti-police. In reality, his administration has given the police hundreds of millions of dollars. He has repeatedly emphasized that the majority of police are “good and decent people.”

de Blasio is clearly pro-police and simply wants to support good cops by ensuring that the rotten apples are tossed out of the police barrel. What responsible citizen, police officer, or union head wouldn’t agree?

It seems that Giuliani, Pataki, and Lynch are “pro-dirty cop.” They don’t appear to believe that racist or violent police officers should be criticized and weeded out of the force. They want the police to act like a street gang or the mafia – pouncing on anyone who breaks the ludicrous code of silence, which allows bad cops to flourish and continue to prey on minority communities.

Anyone with common sense or two functioning eyes was nauseated when they watched the murder of Eric Garner, who yelled “I can’t breathe” while rogue cops choked him.

That was not legitimate policing. It was illegal punishment of a man who wasn’t harming anyone. If a police officer or union head thinks that such behavior shouldn’t be condemned, he or she doesn’t deserve a badge. Clearly, their judgment is so poor, their views so lawless and disorderly, their values so tarnished and twisted, that they haven’t earned the right to wear the uniform.

The job of the police is to protect and serve. But those who mindlessly attacked Mayor Bill de Blasio are self-serving and protect the destructive status quo, where too many minorities are afraid of police. The politicians who enable this behavior should feel ashamed. They are truly the slimy wiggly worms that cause rot in the Big Apple.

Previous post:
The Media Should Give Bernie Sanders a Fair Shot Next Post:
December 27th 2014 – I’ve Got Issues
about the author: Wayne Besen