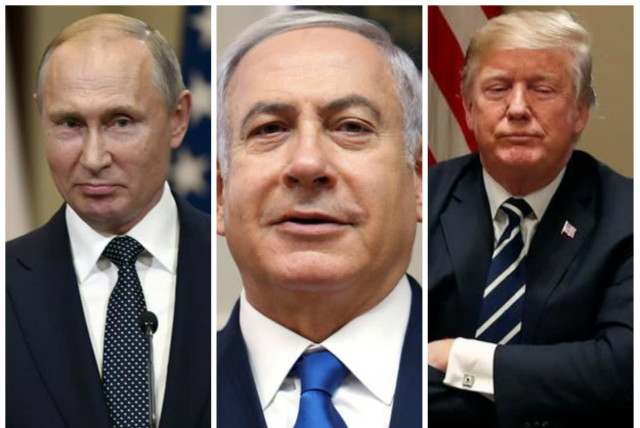 Trump and his Enablers compromised Israel’s National Security and Sovereignty

If it’s not clear by now, it should be. Donald Trump was the worst president for Israel in the nation’s 74-year history. While he artfully distracted gullible Republican Jews with symbolic deals, such as moving the United States Embassy to Jerusalem, he compromised the Jewish state’s sovereignty and jeopardized its national security. Thanks to Trump, his American Jewish supporters, and Benjamin Netanyahu, Israel is Putin’s hostage. The violent Russian dictator now has veto power over Israel’s self-determination and self-defense.

The overwhelming evidence of this troubling new power dynamic burst into full view last week. Israel was one of the world’s few democracies to bite its tongue on condemning Russia’s savage and unprovoked attack on Ukraine.  While the rest of the free world slammed Mother Russia, Israel’s Foreign Ministry issued a mealy-mouthed statement citing “steps taken in eastern Ukraine”. Not once did this embarrassing statement mention Russia.

Humiliated by justified criticism from allies, Foreign Minister Yair Lapid condemned “the Russian attack” as a “serious violation of the international order” and offered “humanitarian assistance to Ukrainian citizens,” but stressed Israel’s good relations with both countries.

The New Yorker reports that Israel’s position dismayed the Ukrainian Embassy in Tel Aviv. “We just really hope that they will do something that sounds the same as our Western allies.”

Minister Naftali Bennett offered another milquetoast statement: “These are difficult, tragic times. Our hearts are with the civilians of eastern Ukraine who were caught up in this situation.” It’s not merely a “situation” or act of nature, like a tornado or a flood. It’s an aggressive, totalitarian nation overrunning a smaller democratic nation through brute force. It’s Putin’s war of choice.

Israel then considered staying neutral or not voting in favor of a General Assembly condemnation of Russia. Israel reluctantly changed its tune only after it was lobbied by the United States, which expressed its disillusionment with the amoral Israeli position.

If you put the complicated Palestinian situation aside (which we will do here for the simple sake of not getting hopelessly bogged down), Israel is a democracy with the best human rights record in the Middle East. Their indispensable patron is the United States, which is leading the effort to isolate and sanction Russia. Israel, as a modern democracy with a keen interest in deterring territorial land grabs, should be leading the world in criticizing Mother Russia. Especially, with a brave Jewish Ukrainian president, Volodymyr Zelensky, sticking his neck on the line to save his country.

So, what the hell is going on with Israel?

In 2019, Donald Trump pulled out of the Kurdish area of Syria during the battle with ISIS. The Putin-worshipping Trump fatally weakened the U.S. position is Syria and invited Russia to fill the vacuum. Not only did he screw our Kurdish allies by allowing Turkey free rein to attack their perceived historic foe, but Trump also blessed Russia as Middle East Kingmakers.

Trump’s kowtowing to the Kremlin was inexplicable. In 2018, United States troops were attacked by Russian mercenaries, resulting in a four-hour gun battle. The Russians were rebuffed and several hundred were killed before they retreated. While there were no American casualties, the incident highlighted the dangers of strengthening Russia’s hostile military capabilities in the Middle East.

At the time, I condemned the Trump Administration for abandoning our Kurdish allies, but also handing Israel’s future over to a malignant power. When most people think of anti-Semitism, they think of Hitler and Nazi Germany. But prior to the Holocaust, a virulent hatred of Jews was nurtured and promulgated by Mother Russia. In fact, if you ask many Jewish American citizens why their families emigrated to America, it was the result of vicious, recurring Russian pogroms. Israel has a large population of Russian Jews who also escaped terror in the tundra.

Thanks to Donald Trump, the historically anti-Semitic Russian bear is drinking milk and pawing honey on Israel’s doorstep. Did Jews really flock to the safety of Israel only to once again have their fate determined by irascible Russian strongmen, whether they be dictators, czars or communist leaders?

Sadly, this nightmare appears to be the case. To keep its population safe, Israel must intercept Iranian weapons that are sent to Lebanese factions of Hezbollah intent on destroying Israel. Preventing these lethal weapon transfers requires Israel to fly into Syrian airspace to bomb those transporting guns, rockets and bombs. With Trump handing Syria to Russia, a petulant Putin could potentially deny Israel the ability to defend itself. Additionally, Russia could close the skies to Israel’s fabled air force, preventing it from protecting itself against Iranian attacks. Those who say this could never happen are the same naïve fools, who until the bombs dropped, swore Russia was bluffing on Ukraine.

Israel is an itty-bitty little country that only exists because of its determination and ingenuity in creating a powerful army. Israel, however, is roughly the size of New Jersey and can’t win a war against a pitiless monster the size of Russia. As a result, Israel finds itself in a bind, where it surely wants to condemn Russia’s war crimes against Ukraine but is concerned if it offends Russia it will end up becoming a future Ukraine. Or, at the very least, a sunnier version of Belarus. Israel’s vacillation is less about a failure of morality, than concern about its own mortality.

Russia is already making veiled threats to Israel. According to The Forward:

Periodic reports of “spoofing” — electronic-warfare interference aimed at Israeli planes — are a reminder that Russian acquiescence to Israeli actions (self-defense) remains conditional. A similar hint of menace hung over Russian deputy-UN ambassador Dmitry Polyanskiy’s reference last week to “Tel Aviv’s announced plans for expanding settlement activity in the occupied Golan Heights.” The deliberate omission of Jerusalem as Israel’s capital was a none-too-subtle threat. Those rumblings from Russia are the reason that Israel cannot afford to ride to Ukraine’s rescue.

Israel’s subservience to Russia could have been avoided. Tragically, Trump hoodwinked short-sighted Republican Jews. He cunningly stoked the fires of the culture wars. He persuaded too many Jewish voters that “woke” hoards on American college campuses were the largest threat to Israel. As a result, the (late) Sheldon Adelson crowd was asleep when Trump created a genuine existential crisis on Israel’s border.

It’s bewildering how any sentient Jewish person would look at Trump’s political coalition, and long list of obnoxious public statements, and believe the Trump experiment was going to end well.

Empowering hate-mongering bigots led to a predictable rise in hate crimes against Jews. The American Jewish Committee reports that “Jews—who make up no more than 2% of the U.S. population—are the targets of nearly 60% of religious bias crimes should set off alarm bells. AJC’s 2020 State of Antisemitism in America report revealed that an astounding 88% of American Jews are concerned about Jew-hatred in the United States.”

The AJC rightfully pointed out that attacks come from the left, right and center.

However, right wing terrorism is, by far, the dominant strain in the Unites States. It has only grown since Trump defended white supremacists in Charlottesville as very fine people. The Center for Strategic & International Studies reports:

So, a quarter to a third of Jewish American voters foolishly enabled Trump’s folly. While claiming to love Israel, they effectively assisted in handing over Israeli sovereignty to whatever modern czar, whether Putin or a future anti-Semitic leader, sits in the Kremlin. Today, Russia has two primary military bases in Syria. One is the aerodrome in Hmeimim and the naval port of Tartus. Moscow also claims more than 63,000 Russian military personnel are in the Syrian desert. Given this new power dynamic, one can see why Israel is petrified of offending Russia.

There are many misguided, and flat-out dumb, reasons why an American Jewish person would support Donald Trump and vote Republican. But please don’t insult our intelligence by pretending that he or his party are “pro-Israel”. This week’s humiliating subordination to Mother Russia, in the face of its tyranny against Ukraine, settles the question of whether Trump was good for Israel once and for all.