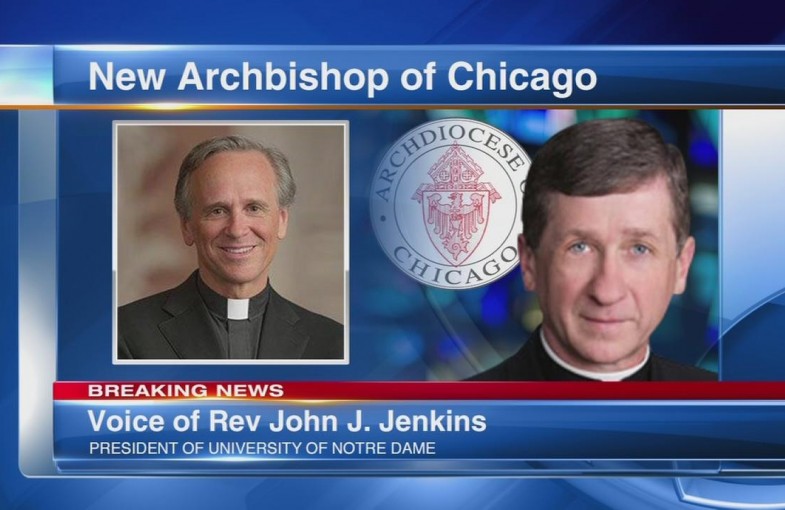 On the front page of The Chicago Sun Times last Friday was a spread of the city’s new Archbishop, Blase Cupich. The headline accompanying his full-page picture was: “PEACE SIGN.”

He replaced the combustible and divisive Cardinal Frances George. Cupich, who will now lead Chicago’s 2.2 million Catholics, was sworn in Tuesday at Holy Name Cathedral.

This selection appears to be as intentional, as it is controversial. Let there be no doubt – this was a double palm, slap in the face, and full-fledged repudiation of Cardinal George. Pope Frances plucked Cupich, the Bishop of some little-bitty place in the middle of nowhere called Spokane, and catapulted him onto the international stage. The Pope’s message could not have been clearer: He rejects the ugliness of Francis George and doesn’t want any more useless Culture War Cardinals.

Unfortunately, there are conservative bishops and cardinals who appear to be conspiring against Rome. They are livid with the more loving direction Pope Frances is taking the church. And this angry cabal of bitter curmudgeons will stop at nothing to undermine this Pope’s agenda. Think of them as the Vatican’s Tea Baggers who are seething with rage. They are spitting mad that this more enlightened Pope is taking the Roman Catholic Church in a more progressive path. (Though, progressive is certainly relative, as Rome’s positions on many issues are still way too conservative.)

The Pope has told the Church not to be obsessed with divisive social issues. He is forcing the church to discuss long settled topics like abortion, those who are divorced and remarried, the place of women in the church, and homosexuality. On gay rights the Pope famously said, “Who am I to judge.”

Well, this upset those who made their career by being mean-spirited and judgmental. The Pope just had to remove American Cardinal Raymond Burke from the Vatican’s high court. If he were Chris Christie, Pope Frances would have told Burke to “sit down and shut up.”

“…You are left at times puzzling over what the Pope’s intention is. What he says is clear enough, but what does he want us to do? I’d like to sit down with him and say, ‘Holy Father…can I ask you a few questions about your intentions?’”

I’m going to translate that:

Frances George is an intolerant, authoritarian, moralizing scold. He is strangely, even queerly, obsessed with homosexuality. So much so, that I call him “Bishop Boystown.”

And now this decent new Pope comes along and basically says, “Why don’t you get your dirty mind out of the bedrooms of gay men and focus on the poor, disadvantaged, the hungry, and the disenfranchised? Why don’t you get your priorities straight? There are so many major problems in Chicago and all you can do is 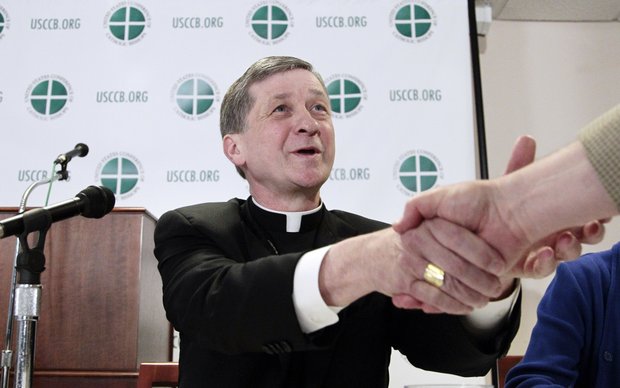 obsess about Gay Pride? Is there something seriously wrong with you”

Frances George is a guy who seems to chortle with delight every time he turns on the news and sees his face on the little screen. He realizes that going to a soup kitchen to serve meat to the dispossessed, won’t get him on Meet the Press.

The last two Pope’s indulged Frances George in his homophobic fetish. But the new Pope isn’t buying his self-indulgent, petty little moral crusade. And this has made the church’s right wing rabble-rousers, like Frances George insecure. They don’t know what to do. They are terrible confused.

Frances George is chomping at the bit to gay bash and go culture crusading. But Pope Frances has placed he and others of his ilk on a short leash – and they want to be unleashed – so they can act like nasty, rotten, judgmental, finger wagging, scolds.

To gay bash or not to gay bash? That is the question. They don’t know the answer, and it’s driving the Frances George crowd crazy.

Look, I don’t agree with much of what Pope Frances says. He needs to change doctrine that harms gay people and devalues women. The church can do even more to stop pedophile priests. The Pope should be in favor of legalizing marijuana instead of giving a religious veneer to the ruinous war on drugs.

However, Pope Frances seems like a genuinely decent human being with a big heart, who isn’t obsessed with fringe issues. He’s trying to do the right thing – not the Right Wing thing. And this is going to earn him a lot of powerful enemies that will try to degrade his power and bring him down.

The appointment of Cupich, and his fresh new tone, is already making a difference. Cardinal Frances George once famously compared gay groups to the Ku Klux Klan. Meanwhile, Cupich seems to have his head in the right place, and his priorities straight.

In his initial speech he spoke of addressing Chicago’s violence and said:

“It’s going to take everyone to be involved in that, religious, civic leaders, political leaders, the business community. Violence is bred many times in poverty, in situations of poverty and inequality, so those have to be addressed….What happens in one neighborhood affects us all….It’s not just a matter of stopping the violence by dealing with violence. It’s a symptom of something deeper.”

Hmm, that sounds like something we’d say on WCPT. I don’t have to be a Catholic or agree with where the church stands on many issues to say “AMEN” for prioritizing that message. So far, I respect what Cupich stands for and I hope it continues. In terms of Frances George, all I can say is good riddance. As a first-rate, world city we deserve so much BETTER than him.

Talking about awkward, Cupich had to stay with Frances George, the repudiated conservative he is replacing — because – get this — there was no bed ready for Cupich in the Holy Name Cathedral rectory.

I know the pedophile priest scandal cost a lot of money, but church isn’t broke. Couldn’t they have put up the new bishop in a Hilton or a Marriott for a couple days until the bed arrived? Weird.

What an unpleasant welcome for a most welcome new voice.

Let’s hope Bishop Cupich continues to keep his priorities in line – and not turn into a vindictive, camera chasing stage horse like his predecessor.