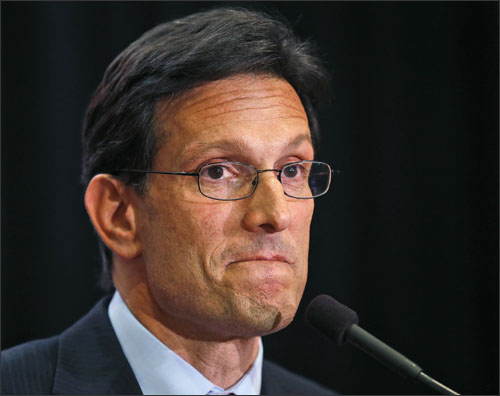 Arrogance and delusion led to House Majority Leader Eric Cantor’s shocking eleven point primary defeat by Virginia college professor David Brat. Cantor lost because he’s a smarmy opportunist who thought he was so clever, that he could organize, manipulate, and control the nativist, reactionary right. He was wrong.

It was always a suicide mission. Cantor is an ambitious career politician, yet he foolishly associated himself with an angry, irrational, anti-establishment, anti-intellectual force that despises government. In the end, the Frankenstein monster that he played a key role in elevating to national prominence figured out that Cantor was an insider, so they threw him out.

Even with his thick Southern accent and conservative credentials, the House Majority Leader was a quintessential creature of Washington. When Eric Cantor slammed DC, it looked about as sincere as the Duck Dynasty guys berating the Waffle House. Cantor was a phony — a fancy steakhouse guy, posing as a connoisseur of Hamburger Helper.

He is also a Jewish man representing a rural Virginia district with virtually no Jewish people. Some commentators believe anti-Semitism may have played a role in his defeat as the district became more country and conservative. There is no overt evidence that backs this theory, however, Cantor could not appeal to restoring Christian family values the way David Brat cynically could.

Thanks to shortsighted politicians like Eric Cantor, the Republican Party is no longer hospitable to people like Eric Cantor. In his place are rabid Tea Baggers, like Chris McDaniel, who is locked in a nasty primary runoff against longtime Mississippi Senator Thad Cochran. The GOP has veered so far to the right, that radical primary voters now view lawmakers, who used to be considered conservative, as too liberal.

This “cleansing” process has meant that only extreme candidates are deemed pure enough to be “real” Republicans. Mississippi State senator, Chris McDaniel, is the distillation of this process and the ultimate personification of the GOP’s base. The candidate comes from Ellisville, Mississippi, which has a population of 4,400. Liquor sales are prohibited and residents reenact Civil War scenes and honor the birthday of confederate hero Robert E. Lee. The country courthouse kept its sign that read “colored” and “white” above its water fountains until 1989, when the NAACP insisted it be removed. But, the county refused and instead voted to cover the racist words with plaques.

Brat’s victory in Virginia was partially attributed to the power of conservative talk radio, where hosts, such as Laura Ingraham, attacked Cantor. Meanwhile in Mississippi, Chris McDaniel is a former host of “Right Side Radio,” which pushed a fundamentalist Christian viewpoint. According to the New York Times, when he was elected to the state senate McDaniel co-founded a conservative coalition and helped push through bills allowing student led prayer in schools and opposing illegal immigration.

McDaniel is so right wing that when he gives away free turkeys each December at a local Baptist Church, he insists that the hungry and the homeless say, “Merry Christmas” rather that “Happy Holidays” if they want to eat.

This is the white, rural, anti-gay, anti-Hispanic, anti-government, Christian fundamentalist party Eric Cantor pandered to and helped bring to prominence. All I can say, Mr. Cantor, is “Merry Christmas,” I hope you enjoy your long holiday away from Washington.

With Cantor’s ouster, everyone thinks compromise on Capitol Hill, which was already on life support, is now dead. Pundits insist that the few remaining moderate Republicans are going to become more intransigent, especially on issues like immigration and the debt ceiling.

But, in doing so they are digging their own graves. Mainstream Republicans running against Washington, is only going to get them kicked out of Washington. They are never going to out tea bag the Tea baggers, and the GOP insurgents are always going to be seen by primary voters as less tainted and more authentic.

If mainstream Republicans were smart – which they’re not — they would declare war on the Tea Baggers and try to destroy them before it is too late. They would work closely with Democrats to make Washington succeed, and then tout their ability to reach across the aisle and find solutions. They would widen the Big Tent by passing gay rights measures and immigration reform, opening up the Party for new and younger voters. But, they probably will ignore this advice and instead try to be Ted Cruz light – and in doing so go the way of Eric Cantor.

Cantor’s defeat has huge implications for the presidential race. The last three GOP primaries pitted crazies against those who feigned insanity to win the nomination. The Tea Baggers will make the case that three straight nominees – Bob Dole, John McCain, and Mitt Romney – were inauthentic and that cost them their races. They will argue that now is the time to choose an authentic Tea Bagger, who won’t have to constantly waffle and change positions. I think that Texas Senator Ted Cruz or former Pennsylvania Senator Rick Santorum, or some other extremist, will finally get the nomination.

In such a scenario, Hillary Clinton will likely win in a landslide – and the conservative nominee will get crushed like Barry Goldwater once did because he was too radical. And, only in the smoldering ashes of defeat will these stubborn Tea Baggers finally understand that they are the immoral minority. In this vacuum, the GOP establishment can reassert itself and finally get the Republican Party back on track. However, we all know that it’s going to take a monumental defeat of a Tea Bagger in 2016 to finally put this toxic movement to rest.