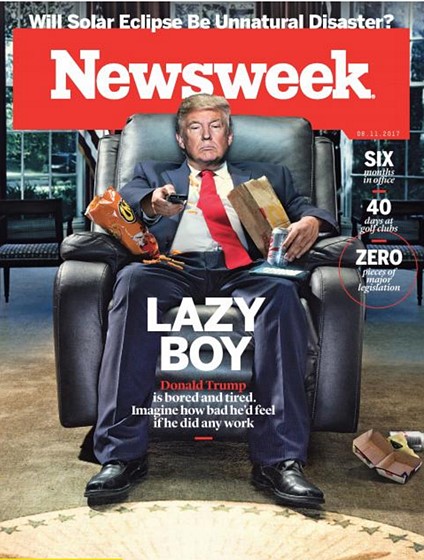 A lazy, low energy, loser. That is what Newsweek essentially called Trump in a devastating cover story. They compared our president to the underachieving show salesman Al Bundy, in the sitcom Married for Children. And for those in red states, yes, that comparison is actually an insult.

In another 2011 tweet, Trump wrote: “Obama plays golf to escape work while America goes down the drain.” He told his followers in August 2016, “I’m going to be working for you, I’m not going to have time to go play golf.”

You know what’s coming now. The part where I tell you that Trump is completely full of it:

In little more than 6 months in office, Trump has golfed 40 times. The website Trump Golf Count estimates Trump’s habit has cost the American taxpayers $55 million. The New York Times found that the president has visited Trump-branded properties a grand total 56 days, nearly a third of his time in office.

Politico adds, George W. Bush didn’t golf for the first five months of his presidency, while Obama did not golf during his first four months in office. Trump waited two weeks before he teed up and hit the links.

The Newsweek article kneecaps the president, listing his victieis in the Lazy Olympics:

• One solo press conference since his inauguration

• Just one single trip west of the Mississippi since taking office

• Zero visits to Iraq and zero trips to Afghanistan

• A Washington Post investigation found that Trump’s schedule was “awfully light…. We are left to make one of two assumptions,” the Post wrote. “Trump either is hiding a lot of his presidential business from the public, or he is not doing much at all.”

• Reuters weighed in and found that in Trump’s first 100 days in office, he “made fewer appearances outside of the presidential bubble than his three immediate predecessors.”
•
The Washington Post, reports that there are still 350 key administrative positions in which no one has been nominated.

• There has not been a single key piece of legislation passed, even though Republicans control the White House, Senate, and House. Most notable is the GOP’s inability to pass healthcare.

Somewhere, “Low Energy” Jeb Bush is reading this article and feeling vindicated. If he’s up from his nap.