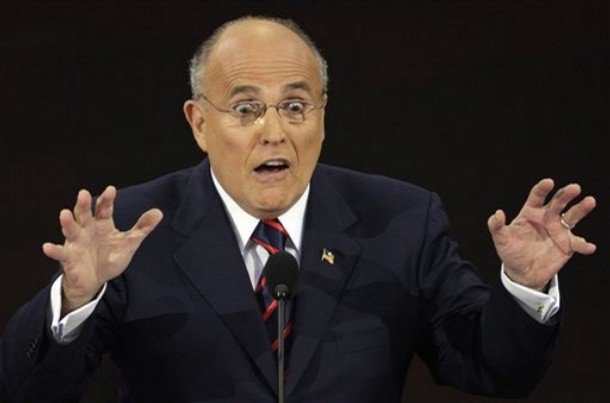 “I know this is a horrible thing to say. But I do not believe that the president loves America.”

Giuliani is 100% right, what he said was horrible, yet he said it anyway, which makes Giuliani a horrible human being. By uttering such defamatory words he instantly went from America’s Mayor to America’s Mooncalf.

While Giuliani’s insults may have thrilled the Republican base, they turned out to be baseless. The New York Times listed several occasions where the President smooched with America. For example, in a key Obama stump speech the president repeatedly said that the United States is:

“the greatest democratic, economic, and military force for freedom and human dignity the world has ever known….I believe in American exceptionalism with every fiber of my being.”

The list of examples goes on and on, but facts mean nothing to FOX News knuckleheads.

Apparently, Giuliani also thinks he is the sole owner of 911, and he continues to shamelessly exploit this tragedy. In his warped view, he is the only person on earth who was impacted on that awful day. It’s only a matter of time before he gets a trademark for 911 – so he can sue you if you decide to talk about the incident without his prior approval.

Giuliani (or is it Fooliani?) has tumbled down from the mountain and now resides in depths of the sewer with Sarah Palin, Michele Bachmann, and Ted Nugent, those other fallen right wing nitwits who have surrendered all credibility.

I was living in Washington, DC on September 11. I worked only a few blocks from the White House. When terrorists hit the second World Trade Center building, it was bedlam in DC. The Pentagon had also been hit, right across the Potomac River.

I remember walking on Connecticut Avenue to my DuPont Circle home. There was a storefront that sold televisions. People from all political persuasions gathered around in a state of panic. The fear, anger, and grief, was a shared national experience that had little to do with that blowhard, Rudy Giuliani.

What I’m going to say now may be controversial. Out of genuine concern for his mental health, I wonder if Giuliani may have been psychologically damaged by the 911 experience? Was the stress simply too much and he cracked? Did he get too close to Ground Zero’s toxic fumes? Because, let’s be honest, ever since his encounter with 911 he’s been a little “off.” A trip to Bellevue for a head exam is probably a healthy option.

Interestingly, Wisconsin governor and presidential hopeful Scott Walker was on-hand for Giuliani’s remarks. He steadfastly refused to condemn Giuliani, lest he offend Iowa’s Crackpot Caucus. This was a mistake that will cost him dearly with moderates if he’s lucky enough to win the GOP nomination.

“I don’t think he [Obama] loves America, I think he likes America…”

You have to read between the lines. The Republican Party has been tearing down the Middle Class and running roughshod over the poor. They disguise the damage they have done by wrapping their actions in the flag. Conservatives consistently attack those who legitimately critique this country as unpatriotic, because once Americans start analyzing what’s happened since the election of Ronald Reagan – they are going to turn on the GOP.

The Republicans are not a Party, but a Ponzi Scheme that represents a number of failed ideas held together by the glue of prejudice and Wall Street. They hate campaign finance reform because they need oodles of cash to fund their Big Lie. This is why they have conflated “Free Speech” with “Fee Speech,” where the highest bidder has the most access and impact on our political system.

Giuliani was not the only conservative to hit Obama below the belt. Conservative provocateur and convicted felon Dinesh D’Souza criticized Obama for using a long selfie-stick to take a photograph. The sexually dysfunctional D’Souza apparently thought the stick looked like a big penis. H 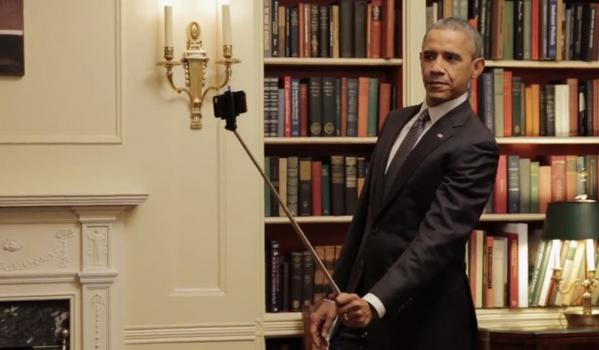 e tweeted a photo of Obama with a message in all caps:

“YOU CAN TAKE THE BOY OUT OF THE GHETTO… Watch this vulgar man show his stuff, while America cowers in embarrassment “

D’Souza used “boy” and “ghetto” in the same tweet. No, the Republican opposition to the president has nothing to do with race, they insist. Notice how these so-called patriotic America-lovers have no qualms about degrading the office of the President of the United States.

Yeah, they really love America. Their actions speak so much louder than their words.

2 Responses to Giuliani Dives into Sewer with McCarthyist Tactics