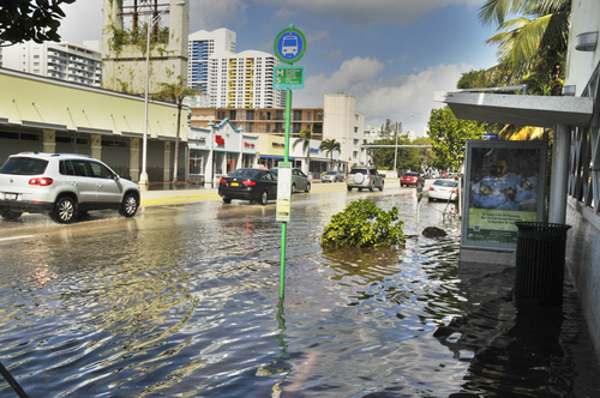 Sen. Marco Rubio is the amoral presidential aspirant from Miami, who is denying climate change in exchange for right wing donations, even as the surf swallows his home turf.

Earlier this year on CBS’s Face the Nation, Rubio towed the Party Line:

“What I said is, humans are not responsible for climate change in the way some of these people out there are trying to make us believe, for the following reason: I believe the climate is changing because there’s never been a moment where the climate is not changing.”

While the scripted political prostitute unconscionably parroted Koch Brother’s talking points, Miami Beach and neighborhoods in mainland Miami, are flooding due to the incipient affects of global warming. An article in The New Yorker, “The Siege of Miami” by Elizabeth Kolbert, lays bare the unquestionable treachery and criminal negligence of Republican leaders, like Marco Rubio, who deny the flood of evidence on climate change. Such men will literally sell their families and friends down the river (and ocean) for the solipsistic drive to attain political power.

While Republicans love to claim they are for tax cuts, their shortsighted and self-centered policies are costing the taxpayers a fortune. The New Yorker reports that Miami Beach is planning to spend several hundred million dollars to counter the effects of climate change, including flooding that is already turning streets into lakes. The beautiful tourist destination has already spent roughly $100 million. While Rubio pockets tens of thousands of dollars in political contributions from Big Oil and the pollution lobby, Miami residents are left on the hook for tens of millions to fix the mess his politics of deliberate denial have left behind.

How is flooding affecting real people in Miami? In the article, the author comes across an elderly woman leaning on a walker. As she rounds the corner, she realizes she is trapped by the floodwaters and wails, “what am I supposed to do?” Some good Samaritans in a truck rescue her. But as the entire island begins to submerge in the future, there won’t be enough trucks to assist those who can’t survive in the increasingly unlivable conditions. 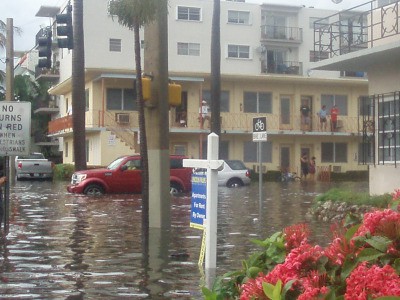 If you thought Rubio was a science-hating troglodyte, Florida’s Republican governor, Rick Scott, is even worse. Scott commanded state employees to deny climate change, talk about it in euphemism (call it nuisance flooding), or say nothing at all.

Jeff Goodell, a journalist penning a book on rising sea levels told The New Yorker: “The level of disconnect from reality is pretty profound…in Florida there are real consequences. The water is rising right now.”

The problem is the GOP has become a party based on greed. It’s multimillionaire masters don’t care about climate change, because they can profiteer short-term. When the day of reckoning comes, they can afford to pick up and move to a gorgeous new home in a fancy new town, while leaving the rest of us to foot the bill and suffer the consequences. Among the sobering passages in The New Yorker piece:

“Globally, it’s estimated that a hundred million people live within three feet of mean high tide and another hundred million or so live within six feet of it. Hundreds of millions more live in areas likely to be affected by increasingly destructive storm surges.

Against this backdrop, South Florida still stands out. The region has been called “ground zero when it comes to sea-level rise.” It has also been described as “the poster child for the impacts of climate change,” the “epicenter for studying the effects of sea-level rise,” a “disaster scenario,” and “the New Atlantis.” Of all the world’s cities, Miami ranks second in terms of assets vulnerable to rising seas—No. 1 is Guangzhou—and in terms of population it ranks fourth, after Guangzhou, Mumbai, and Shanghai. A recent report on storm surges in the United States listed four Florida cities among the eight most at risk. For the past several years, the daily high-water mark in the Miami area has been racing up at the rate of almost an inch a year, nearly ten times the rate of average global sea-level rise.”

If there is a silver lining it is Miami Beach’s mayor Philip Levine. He won office in 2013 by addressing voter’s concerns about flooding. He aired commercials that showed him readying himself to paddle home from work in a canoe.

“Some people get swept into office,” joked Levine, “I got floated in.”

Unfortunately, the state may be doomed if foolish voters keep electing Republicans who float by with the destructive lie that climate change is an imaginary myth. I doubt Marco Rubio will see the light until he needs a snorkel to deposit his Koch Brother loot in the underwater bank.