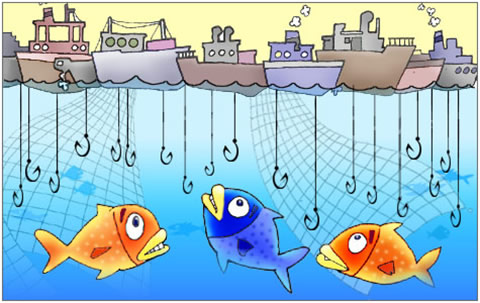 When the Fish Are Gone and the Planet is Fried

You know that phrase “there is more than one fish in the sea?” That may apply if you are looking for love on OkCupid. But if you mean actual fish in the ocean, this may no longer be true if we don’t drastically change our reckless and wasteful habits.

A terrifying headline in last week’s New York Times read: “Ocean Life Faces Mass Extinction.” The message is clear, if we don’t get our act together, Arthur Treachers will soon be serving hamburgers and chips, and Red Lobster will be as relevant as Dodo McNuggets. (Get ready for a future of fish flavored tofu!)

According to the Times story, a team of scientists has concluded that we are, “sitting on the precipice of a major extinction event.” And, no, they weren’t referring to Mitt Romney’s political career.

Malin Pinsky, a marine biologist at Rutgers University and an author of the report said: “We are lucky in many ways. The impacts are accelerating, but they’re not so bad we can’t reverse them.”

Except for one problem – the scientist failed to point out that we are human beings. I have seen no evidence that we, as a species, have been able to place the common good above our private greed. We seem hard-wired to cash in today at the expense of tomorrow.

I’m from Florida and I grew up fishing. And when you pull your boat up to the dock, you are greeted by the pelican hoards. And if you’re in a good mood you throw fish and watch them fight over the scraps.

That’s a metaphor for humanity. We will fight for the last scrap of fish until there is nothing left but skeletons. And then some bloated, conservative Republican will celebrate his “freedom” by catching the last marlin in the sea. He will cluelessly stuff it, hang it on his wall as a trophy, next to the head of an albino tiger he whacked on an African safari with the help of poachers.

Progressives are the only people standing in the way of those who are determined to turn our planet into a sewer. And when we try to preserve the earth for future generations we are often derided as environmental whackos. But the facts don’t lie, and those of us who live in the reality based community are alarmed:

• The report says that coral reefs have declined by 40%.

According to one of the scientists who worked on the report: “If by the end of the century we’re not off the business as usual curve we are now, I honestly feel that there’s not hope for normal ecosystems in the ocean.”

But how do we stop business as usual when our Congress is bought and controlled by the deep pockets of Big Business?

If the surf crisis hasn’t persuaded you to act, perhaps the growing turf calamity will. Another headline in the New York Times read, “2014 Breaks Heat Record, Challenging Global Warming Skeptics.”

What is really troublesome is that the warmest years usually occur during El Nino. For those who don’t work for the Weather Channel, El Nino is a massive weather pattern where the Pacific Ocean dumps incredible amounts of heat into the atmosphere. So it is nothing short of alarming for earth’s temperature record to be broken in a non El Nino year. It’s as rare as Congress actually doing something, or a black person getting an Oscar nomination.

Here is an interesting factoid for a cocktail party. In 2014, Anchorage, Alaska never fell below zero degrees. Scientists are still trying to determine if this was due to global warming or hot air from Sarah Palin.

The scientists said that global warming would get significantly worse in the coming decades. According to Michael Mann, a climatologist at Pennsylvania State University:

“It is exceptionally unlikely that we would be witnessing a record year of warmth, during a record warm decade, during several decades long period of warmth that appears to be unrivaled for more than a thousand years, were it not for the rising levels of planet warming gases produced by fossil fuels.”

The Republicans took over Congress last week. Their main priority was a bill for the Keystone XL pipeline, which would lead to the pumping of waste from filthy tar sands oil into the atmosphere. They also named Sen. Jim Inhofe, a climate change denier, as chairman of the Senate Environment and Public Works Committee.

How ironic, the party of “family values” is leading the way to ensure our children don’t have a habitable planet.